World Record holder ‘Wendo’ and her next nautical challenge 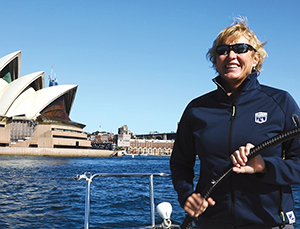 Victoria Silk shares her insight into the world record holder and one of Australia’s most impressive skippers.

Better known in the sailing scene as ‘Wendo’, the list of Wendy Tuck’s accolades is long: 2018 Australian Offshore Sailor of the Year and Australian Yachtswoman of the Year, 2018 Rolex Sydney Hobart Class winner, two-time winner of the Jane Tate Memorial Trophy and two-time Clipper Around the World Race skipper, to name a few.

The little Aussie battler was born not around Sydney Harbour, with a yacht and sailing academy on her doorstep, but in Mount Druitt to a working class family. She tucked her surfboard under her arm as a teenager, boarded the train and taught herself to surf in Cronulla and Manly. A love of the sea was there from a young age and a love of boats came later in life.

In her mid-thirties a chance opportunity to sail ignited a desire in Wendy to make a career of the sport. From dockhand to charter skipper, sailing instructor to ferry driver, anyone who has tried to forge a living from sailing in Australia knows it can be an incredibly tough gig. Somehow Wendy has managed to achieve this with an extraordinary mix of affable rogue and consummate professional.

The pinnacle of Wendy’s achievements to date was becoming the first woman to win an around the world yacht race, placing her among other Australian greats including Kay Cottee, John Bertrand, Adrianne Cahalan and Jessica Watson.

The Clipper Round the World Race takes 700 ordinary folks with a mix of sailing abilities, splits them across 11 boats (some will do legs, others circumnavigate) and allocates them a skipper and first mate – the only professionals on board. Together they compete, hard, across six oceans to circumnavigate the globe.

Wendy’s first Clipper campaign in 2015/16 heralded a very respectable sixth place. When she was asked back for the 2017/18, Wendy sailed into the history books. Other than the advantage of knowing the boats, the course and the limits, I asked her what was different second time around.

“I had a lot more confidence in myself. The first time I didn’t know what to expect … it was just terrifying at the beginning. The second time we seemed to pull together as a team so much more. At the stopovers the BAGS (boyfriends and girlfriends) and WAGS (wives and girlfriends), were all there, involved. Instead of crew disappearing we remained a team with the extended family included. It was like a family day out with cheese and bikkies and we’d all do the race preparation – they loved it!

“I had great watch leaders on both campaigns but probably more experience on Serenity (Sanya Serenity Coast, her second boat). I spent more time coaching those guys and then they could spend the time teaching newbies how to steer. That really freed me up. The other big thing is that I was kinder to myself, something I talk about in every talk I do. You make a mistake – everybody makes mistakes – you acknowledge it and let it go. You are never going to make every decision correctly, it’s how you deal with the mistakes and move on.”

Having made history, Wendy was asked to join The Maiden Factor as guest skipper. Maiden is the yacht that Tracy Edwards herself made history with when she led the first all-female crew in the 1989 Whitbread Race around the world. Restored and repurposed Maiden has embarked on a world tour to advocate for the education of girls, supporting community programs worldwide. Wendy received the email from Tracy herself, the night before the finish of the Clipper campaign, and joined the boat in 2019, skippering an all-female crew from Sri Lanka to Fremantle to Sydney through to Auckland, Hawaii, Vancouver and the west coast of the USA finishing in L.A., over 16,000 nautical miles.

Sitting dockside with Wendy in Rushcutters Bay, a stream of ‘Heya Wendy,’ ‘Hi Wendo’, ‘Wendy!’ is as constant as the tinkling of halyards in the background. It’s common knowledge around these traps that Wendy has her sights on a two-handed Hobart entry, though at the time of writing what the 2020 Rolex Sydney-Hobart will look like in the year of coronavirus remains to be seen.

Sailor and longtime friend Campbell Geeves is the other half of the duo. It is clear the pair have a deep friendship where the ‘giving of s#*t’ is bedrock – along with trust and respect. It was Campbell who gave her the moniker ‘Wendo’, when they first met at TAFE studying for their Coxswains in 2002.

I’m intrigued to know if Wendy’s decision to tackle a two-handed quest was a reaction or antidote to all that crewed sailing; did she just need some peace and quiet?

“Nah, I was just looking for the next challenge. When they announced the two-handed (Mixed Two-Handed Offshore Keelboat) division for Paris 2024 that was it. I would have been sailing on Maiden, thinking ‘what am I going to do next?’”

Although never pushing her gender and holding to the mantra ‘I am just a sailor’, Wendy realises the unique and honoured space she now occupies as an inspiration to girls and women worldwide.

“When we finished in Liverpool in the 2017/18 race, a former Danang crewmember’s eight-year-old daughter was on the dock holding up a sign that said: ‘We love you Wendo’. Knowing that she had said ‘one day I’m going to skipper a boat around the world’ – not just race around the world, but skipper a boat, it might sound a bit cliched, but to me that was very cool. The other thing was Nikki came in second (Nikki Henderson took second place) – girls one and two – that was awesome. And it was a fight right to the end. It was a fight all the way.”

Wendy has no doubt that she and Campbell have what it takes to be a winning duo. When I suggest they will have stiff competition in their bid to represent Australia in the keelboat event at Paris 2024 she agrees and says the pair is under no illusion, conceding their biggest  challenge will be securing bid sponsorship.

“We are taking it one step a time and that’s this year’s Hobart. If we could secure a sponsor to take us through a four year program that would be the ultimate goal.” 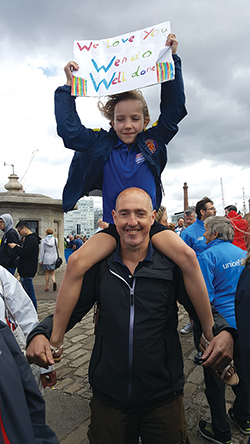 Their current plan is up-spec Campbell’s Beneteau First 34.7 Speedwell to compete in the first ever two-handed division of the Rolex Sydney Hobart, and wait for the announcement of the keelboat selection for the Paris Olympics.

I wonder how the step to a smaller boat for the 628nm sprint to Hobart will feel for Wendy after 3,000nm legs on a 70-footer.

“The First 34.7 is a great size for two-handed, really manageable. It’s actually really good to be on a smaller boat again. There is no sprinting on a boat that size – you still have to manage yourself and the boat like you would on a longer leg … navigation and weather systems still come into it. It’s still a long game,” she says.

And if there’s anything Wendy is good at, it’s the long game.