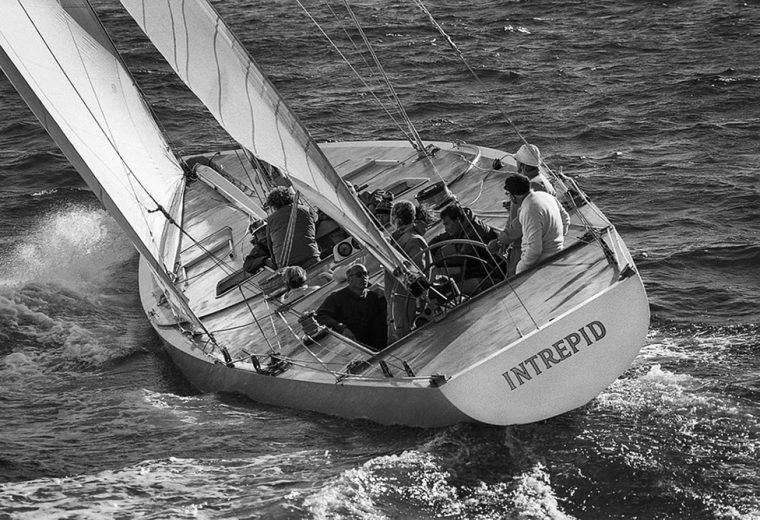 Every Australian aged 45 or more can remember the outburst of national euphoria in September 1983 when we won the America’s Cup to end the longest winning streak in sports history. But few can recall the nail-biting fortnight more than a decade earlier when, but for a painful combination of bad luck, confused crew selection and outright skullduggery, victory might also have gone to the Australian challengers.

The defending yacht in 1970, skippered by Bill Ficker, was Intrepid. This was the breakthrough Olin Stephens design that had walloped Dame Pattie 4-0 in the 1967 series. For Australia, Frank Packer’s new challenger was the Alan Payne design Gretel II, the last 12-metre to be built in wood.

Packer, a gruff business buccaneer, had faith in the brutal management technique of pitting his best staff against each other. The two helmsmen competing for the honour of steering the Australian challenger in Newport were Martin Visser and Jim Hardy. They’d each sailed with their own crews during the lead-up racing, but when it came to the challenge series itself Packer couldn’t resist making his own mix-and-match choices between personnel. It was a recipe for disaster.

Jim Hardy was eventually confirmed as the nominated skipper, but Visser – the more aggressive helmsman – also sailed on GII at the invitation of Hardy to drive the yacht during the starting sequences. Even more divisive was Packer’s crew decisions and Hardy – now Sir James – still finds those choices difficult to accept. “To think that we finished up racing Gretel II with not one of my three chosen for’d hands, who had clearly been superior to Martin Visser’s foredeck crew in the trial races over a year.”

There was trouble even before the dueling 12-metres had crossed the starting line for the first race on September 15. During the starting sequence Gretel II caught Intrepid in a point-blank port and starboard position. Visser had to change course to avoid a collision while Hardy, on the right-of-way boat, raised their protest flag.

Once both yachts were clear and racing there was an embarrassing foul-up with the spinnaker hoist on Gretel II that took an eternity to untangle. Then, at the gybe mark, for’d hand Paul Salmon fell overboard. (Salmon, from Visser’s crew, had form; he’d also been for an unauthorised swim during training sails in Sydney.)

The Australians lost almost six minutes getting him back on board yet were only 3’27” behind at the next mark. The race was lost but GII had shown herself to be at least as quick as Intrepid – and Hardy was confident that Intrepid’s pre-start infringement would see the American yacht disqualified.

He had not anticipated hometown rules. Back then, all protests were heard by the New York Yacht Club itself, which also happened to be the defending club. Intrepid was their boat; the America’s Cup was their regatta. The NYYC grandees in their red pants and straw hats would be plaintiff, judge and jury combined. They ruled that because there had been no actual collision between the boats (even though Gretel II had clearly taken evasive action) there was no “foul”. Protest dismissed.

There was worse to come. Race Two saw the incident that cemented the reputation of the NYYC as masters of perfidy (at least to Australian minds). As the two 12-metres came together for the customary pre-start dogfight, Visser was on the helm with Hardy manning the main sheet. Half a century later Sir James can still recall the sequence of those dramatic events off Newport in extraordinary detail.

“We wanted to shut the gate between the committee boat and our boat. I can remember calling for the jib to be pulled on. The port trimmer that day was John Bertrand.” (This was the same John Bertrand who, 13 years later, would steer Australia II to its historic victory.) But at that moment back in 1970, Hardy remembers Bertrand and the winch grinders being a little too keen.

“They wound the jib in so quickly that the bow of the boat paid away and opened up the gate. So I called for the jib to be thrown off, to let the bow come back.”

From that moment the disaster unfolded in an inevitable sequence that’s all too familiar for anyone who’s raced yachts with serious intent.

By the time the two 12-metres had sorted themselves out Intrepid was ahead in clear air and rounded the first mark with a 42 second lead. Both yachts were flying protest flags. With Hardy now at the helm the Australians sailed an inspired race. In fading breeze, and just half a mile from the finish line, they finally overhauled the Americans and went on to win by more than a minute. It was a triumph of sheer sailing skill and determination, but the real race would again be run in the protest room the next morning.

This time there had been a collision and the Australians were confident Intrepid had committed the foul. But again, the NYYC found a way to turn the tables. Hardy believes the Race Two protest hinged more on a technicality of language than any interpretation of the international yacht racing rules.

“To them, we were using the wrong word. The committee asked me, as a witness, ‘Why were you calling “up!” to Intrepid if you weren’t luffing them?’ The Americans are very particular about using the right word. We should have been calling out ‘No room!’ Well, to Australians ‘up’ is ‘up – and out of it’. But at the end of the day we lost the protest.” 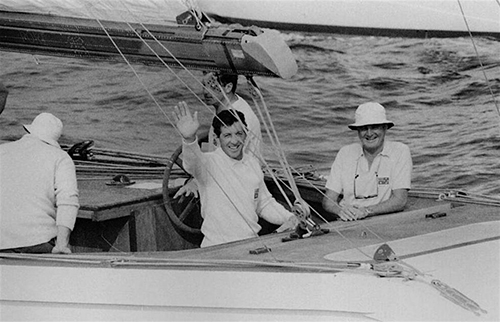 Hardy wished to press the matter further by calling evidence from a UK official, the acknowledged world expert on the racing rules. Packer’s response to that request has become the most quoted line in America’s Cup history: “Protesting to the New York Yacht Club is like complaining to your mother-in-law about your wife.”

A few days later the Australians struck back. After the Race Two debacle Hardy went to see Sir Frank Packer and asked his permission to resume the helm for the starts. Packer’s reply was, “Jim, you go and do what you like”, so Hardy started in all the remaining races.

The Australians scored a commanding win in race four but those two early protest defeats had been a mortal blow. Gretel II went on to lose the 1970 challenge 1-4 and it would be many years before Hardy could shake off the bitterness of that series.

“It wasn’t until the Fastnet Race in ’79 when I was steering Impetuous in the Admiral’s Cup team. We had 60-foot waves and 70-knot winds. People were losing their lives; fifteen guys drowned. It washed away the 1970 America’s Cup disappointment, but it took that long – virtually a decade.”

Meanwhile, in response to the widespread condemnation they’d suffered for their conduct during the regatta, the NYYC was forced to accept an international jury for future America’s Cup challenges. Perhaps that’s the only positive legacy from what is still remembered as the most controversial series in the long history of the event.