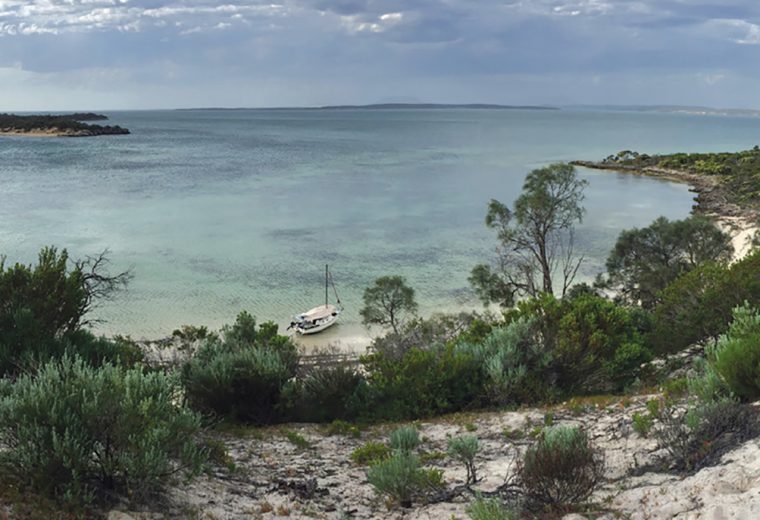 In November 2020, Mark and Kathy Stringfellow embarked on a 26-day trip from the Central Coast in NSW to South Australia with their Cygnet 20, Tide Rider.

In October 2020 the border with South Australia was opened. This gave us the chance to visit relatives and try some long-distance touring/exploring with Tide Rider.

We are campers/kayakers and not really sailors as such. We purchased Tide Rider to use as a base for camping on water. Its 0.34m draught with keel/rudder up allows us to get into shallow bays and creeks, well away from most other watercraft.

On the road to South Australia

On the road Tide Rider became our caravan. It towed easily and it was great having its amenities already set up behind us. All up this trip we drove just under 6,500kms. Due to COVID we had to go via Broken Hill to get to Adelaide. We drove nearly 1,100kms the first day and pulled up at a rest area between Wilcannia and Broken Hill. Sleeping in the boat while it was on the trailer was easy and comfortable. After spending a week visiting relatives in Adelaide we drove to Coffin Bay.

That trip took two days as we called in to Port Pirie, Port Augusta, Whyalla and Port Lincoln to have a quick look. All very different places to what we see on the East Coast. We overnighted in Tide Rider on a dirt side road. On arrival at Coffin Bay we booked in to the caravan park for one night.

While not as roomy as a caravan it was still very comfortable in the little Cygnet. We got some compliments from the other caravanners on Tide Rider’s good looks. Staying in a caravan park gives you the benefits of amenities, power and the security to unhitch the boat and sightsee. After having a good look around we prepared for the on water part of our trip.

We left the next morning and spent the next  six days on the water in Tide Rider exploring Coffin Bay, which is very shallow in parts. Being able to pull up the keel and rudder proved very useful in seeking shelter and finding that perfect ‘on water’ campsite.

We had some great sailing. Exploring Mount Dutton Bay we were accompanied by some curious local dolphins. With strong winds forecast for the next few days and having been away for 5 nights, we decided it was best to head back. As we returned to the boat ramp, the wind gusted to around 30 knots. It was too strong to comfortably sail on even the second reef, so we dropped the main and returned on the partially furled jib. Even with that small amount of sail out we were doing over 5 knots. Tide Rider is such a versatile little boat and very safe in trying conditions. 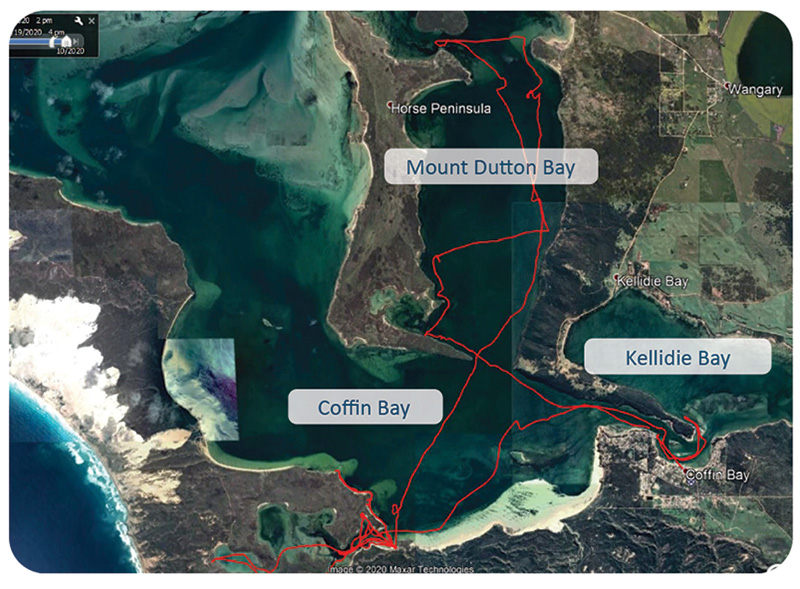 Exploring an unfamiliar bay proved challenging at times, especially judging, depth, tide, strong winds and currents. What surprised us this trip was just how windy South Australia can be. I guess the many wind farms should have given us a clue.

There were very few days with winds under 20 knots and that gets tiring when you are actually on the water. Thanks to the Cygnet’s shallow draught and ability to get in close to shore, or even beach it, we were able to find a sheltered spot each night to get out of the wind. With Tide Rider’s versatility, we had no problems coping with the varying conditions.

We got back to the boat ramp late in the afternoon and after loading Tide Rider back on the trailer began packing up. As it was getting dark we decided to spend the night in the car park and continue next morning. I moved to the most secluded area and we had a great night’s sleep.

For further information on the Cygnet 20 go to www.bwcy.com.au