The Yachties: down the mighty Murray in a Trailer Sailer 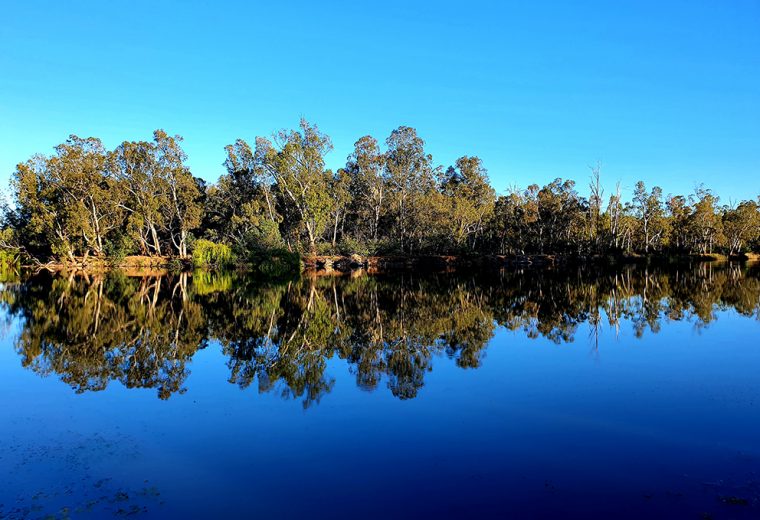 Last November, at the very end of COVID lockdowns that had prevented this trip for nearly two years, my mate Warren and I took our trailer sailer GEM 550 down the Murray River. Starting at Yarrawonga, the trip was 577 kms to Swan Hill. The journey was to take us 13 days at a leisurely eight to ten kilometres an hour.

Why a trailer sailer?

You don’t see many trailer sailers on the Murray. In fact we saw no one else in one. We were even named the ‘yachties’ by a drunken arborist named Mick. The GEM 550 is an old (circa 1996) fibreglass, 5.5 m, fractional sloop, swing keel ‘micro class’. It’s designed for close racing and has all the bells and whistles of a boat from that era: Spinnaker, genoa, reefable main. The mast, however was to stay in its Canberra yard. The untested theory was that you could pack the beast to the gunwales with all the gear you could need for a comfortable, stable river trip, drawing only 0.23 cms with keel up and <100 cms with rudder down.

Lesson one: You don’t need that much gear for two blokes in a boat…

As we all should know with packing, the more room you have the more you put in and the GEM 550 can take up to four to sleep (very crowded). So having packed every possible item from a full box of painting equipment (partly used) to camp oven (used every day) we had no room to sleep aboard. The aim, successfully achieved, was to sleep in swags on the banks and luckily, the Murray has magnificent camping spots, easily accessible with the river level at this time. Importantly, the Victorian side (which ends at the waterline) has 3 chains (60 metres) of public land on its banks. The NSW side has none excepting national and state parks.

Probably the best bit of gear we did take was the bimini top. Taking out the jib sheet cams enabled us to rig a cheap sun and rain cover with no damage to the topside. While at times it was a wind problem, at other times it was a fixed spinnaker.

Lesson two:  It’s not a leisurely cruise when the Murray is in flood.

During our voyage, the Murray was running at three to four metre depth around Barmah. This varies dramatically along the whole course but there were not too many river beaches to be seen. The river was running swiftly – too swiftly to simply glide along. The current would take you to where it was going which may result in some fending off. With our trusty 2 Hp Yamaha outboard the boat tracked well and with the rudder down it was easy to handle in most stretches. However, the leg Yarrawonga to Barmah has been heavily ‘seeded’ with logs to encourage fish and with high water levels many of the ‘snags’ (renamed Murray Crocs) are deceptively below surface level. As river goers will know you can most often spot a snag by disturbed water on the top but you may not be able to see the ones a metre below. With both of us on look out, most of the time, there were still moments of ‘crunch’. One memorable one was when Warren was steering and as we struck a ‘croc’ he was launched on top of me pouring his beer (mid-strength!) down my neck. That hit almost took out the boat’s transom.

Ms Maureen Wright has been updating her wonderful hand drawn river charts for years and they make Murray navigation much easier. The Murray river kilometre signs (NSW side) have greatly deteriorated over the years and many are now missing but with these charts and a keen look out you can work where you are. Click here to see the charts

Camp spots appeared out of nowhere or could be predicted by looking at Maureen’s charts. Tight bends would often reveal minor sand bars. Unfortunately, many sites, especially near towns, have been severely damaged by the weekend party crew. Huge bonfires have caused wood shortages in some areas and some sites are littered with broken bottles. A few fellas are in conversation with the party crews and collect their bottles on Mondays but many places have been enjoyed to destruction. We arrived at one area where a ‘rave’ was being prepared. Good old Aussie boys were knocking trees down (I’m not making this up!) with their four wheel drives. Bonfires were being prepared and ‘doof doof’ music went on until sunrise.

However there are still many spots where civilisation is far away. The screech of the cockatoos and Kookas wake you up and the sun dips or rises over the river and lagoons spectacularly. Bird life was an incredible highlight: Nankeen night herons, Spoonbills, great and little egrets, flocks of corellas and yellow tailed black cockatoos. While Yarrawonga to Barmah was the trickiest navigation, it also was the most picturesque.

The Murray is, of course, a photographer and artist’s dream and every moment there is something to behold.

Breakfast, lunch and dinner were prepared on open fire, though at one site we were literally chased to the boat by swarms of mosquitos Lesson five: Pack the Bushman’s next time! That morning breakfast aboard was in order and at 10 kms an hour the mozzies could not keep up!

We met a few characters along the way. I’ve already mentioned Mick the drunken arborist, but there was also cow cockie Pete who had an evening conversation with us across the river. He spoke into the river the same way as the local first nations people used to communicate with each other on each side of the bank. Then there was wonderful Helen who saw me beginning to lug a Jerry can to the servo at Echuca (almost 2 kms from the river). She kindly offered to drive me there and back. ‘People on the river are happy to give’… And those big wheels did keep on turning. Active and old river boats are everywhere to see and wave to.

Take a backup outboard. We didn’t and it would have been difficult if the old Yamaha had given out. Take an electric fridge and battery. They take up a lot of room but how nice was it not to stop for ice every couple of days and fish skanky meat out of the esky?

Having unsuccessfully negotiated with our respective partners to pick us up, we prepositioned the car and trailer at Swan Hill with the help of Warren’s brother. There is no public transport between Yarrawonga and Swan Hill. Top storage solutions at Lake Boga looked after the car and trailer for $20 a week and even a pick up (we bought him a slab for that one).

Forty to fifty kms a day is very possible and we even finished a day early. Our old bodies were exhausted and maybe a trailer sailer isn’t for the over fifties but it proved its worth and the next leg: Swan Hill to Euston is already being planned.