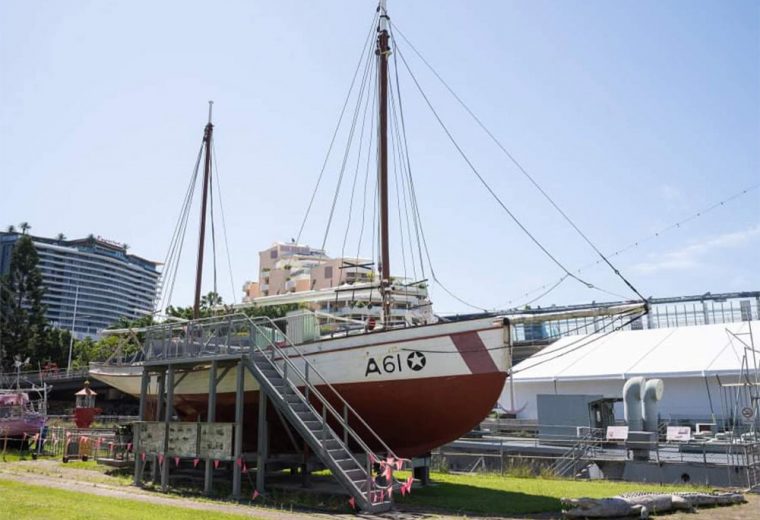 Using a small group of enthusiastic volunteers, the Queensland Maritime Museum is currently carrying out a major restoration of our 115-year-old Pearling Lugger, Penguin.  We are taking her back to her original condition and equipped to her 1930s “Hard Hat” diving configuration.

The work is being supervised by one of Queensland’s leading marine surveyors to full Australian Maritime Safety Department standards, with a view to preserving her for another 115 years.

The project is giving the Museum an active, historical display where visitors can watch a significant large wooden boat being restored.  This work will be documented in detail with photos and articles, which are being posted on the Facebook page, Pearling Lugger, Penguin, Restoration Project.

An important part of the project is to research and document the long and varied history of the Penguin.  (She served in World War II.)  To that end, an active member of the restoration group, Mr. John Hockings, is part of an old Thursday Island pearling family who were one of the originators of the Pearling Industry in Queensland.  Through these connections entirely new material is being found that will add interest to the Museum’s web page with the object of possibly producing a glossy, hard cover book.

An example of new material are links with Japan.  The Penguin’s builder, Tsugitaro Furuta, was Japanese and the leading builder of Luggers on Thursday Island. And he built 41 from 1899 to 1930.  Through contacts in Japan, we have found his family and his many Japanese divers and boat building associates.  They are enthused about a long-lost connection with an industry that supported thousands of their countrymen 100 years ago.

We will also try to involve the Dauan Island Community in the Torres Strait, who operated the vessel for a number of years at the end of her working life, and who, via the Commonwealth Government, gave the “Penguin” to the Museum.

The Pearl Shell Industry in Queensland, based on Thursday Island, effectively began on Tutu (Warrior) Island in 1868 and then moved to Aru Island.  For approximately 100 years Pearling was a major industry and at its peak used hundreds of luggers and employed thousands of people.  It was hard, dangerous work, with very basic equipment.  The Penguin is important because it is a perfect example of the typical “lugger” design that remained constant basically until shelling ceased and was replaced by cultured pearl.  Only a small percentage of shells opened contain a pearl and this was a bonus.  The business was shells that were made into buttons and these were finally replaced by plastic.

Penguin was built on Thursday Island in 1907 for Frederick Hodel and named Mercia.  In 1911 Hodel sold the business to the Wyben Pearling Company owned by Burns Philps & Co. who operated her as part of their fleet until she, and some 60 others, were requisitioned by the Commonwealth Government for military service.  We know little of what she did, or where she operated.  After the war she was sold at Port Moresby for 100 pounds, and then had a number of pearling owners.  In 1966 she was bought by the Archer Pearling and Shelling Company and renamed Penguin.  In 1970 she was again purchased by the Commonwealth Government and given to the Dauan Island Community in Torres Strait as their supply vessel.  She was replaced by a more modern boat in 1982 and given to the Queensland Maritime Museum.

Work has started – a safety fence and scaffolding has been set up, and a detailed survey has been undertaken which shows that the structure was originally very well built and is still in amazingly good condition.  However, areas of dry rot are beginning in the deck and some of the hull planking, so these are being removed and a new deck laid.

Most of the physical work is being carried out by volunteers or on a Pro Bono basis, but donations of money are required for most of the materials needed.  Timber, like clear Oregon and Kauri for deck and planking is expensive, bolts and screws are too.  We are using modern Epoxy glues and paints which are even more expensive but will help to preserve and prolong the life of the structure.  Even a bag of rags to clean up now costs $38.

Stage 1 has a preliminary budget of $40,000 (plus GST) which is needed now to get the outer structure repaired where necessary, re-caulked and re-painted.

Next year Stage 2 will consist of work and materials needed for basic internal fitout, the repair of masts and spars, replacing rigging, and setting up the Penguin for future display, which will utilise the Museum’s existing pearling artefacts.  The major expense for the future is some form of permanent shed/shade structure to protect the vessel from the weather.

All donations over $2.00 are tax deductible, and you can donate to the Penguin Restoration here

The Penguin is a Heritage Listed vessel, and we believe we can research and restore, over the next 18 months to 2 years, a very important part of Queensland and, indeed, Australia’s, maritime history, and in doing so preserve it for the next 115 years.