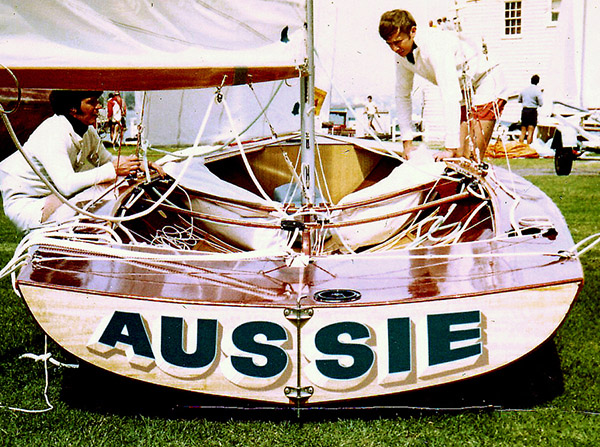 The 1970s is often referred to as the ‘Golden Era of 18ft Skiff Racing’ as it produced large, competitive fleets at both the Australian 18 Footers League and Sydney Flying Squadron, a strong, fleet at the Brisbane 18 Footers Club on the Brisbane River, and an incredible era of progress and achievements for the New Zealand designers, builders and competitors at the Auckland Sailing Club.

After an absence of fifty years, the 1970s also witnessed the return of a Western Australian 18ft Skiff fleet, racing on the Swan River in Perth.

International interest had been gaining momentum for a number of years and finally peaked in the 70s when small fleets were established in both the UK and USA.

The interest and expansion in the 70s was an exciting time for 18 footer supporters in Australia, but the real highlight was the quality and colour of the local racing in Australasia, driven by an influx of champion skippers and teams, high-profile sponsors, incredible designers and the progress of building techniques and technology.

Two New Zealand designers, whose designs and innovations ‘starred’ during the decade, were the internationally famous Bruce Farr and Russell Bowler.

At the beginning of the 1970s, it was still a time of transition/opinion between the merits of the three-handed versus the four-handed boats, which were basically a flow on from ‘Schemer’ 1963.

Bob Holmes, who had already won three world titles by the 1970s, and Hugh Treharne, who was runner-up in 1963, preferred to stay with the four-handers. Treharne was successful in 1970 and Holmes added two more titles to his name in 1971 and 1973.

Despite that success, the writing was on the wall as the new-breed of sailors and designers to the 18s definitely had different ideas.

Former Inter-dominion 12ft Skiff champion David Porter joined the 18s in the 1970-1971 season in a three-handed, John Chapple-designed flying machine, named Aussie, which dominated the racing on Sydney Harbour. Aussie won two races at the 1971 JJs in Auckland, unfavourable conditions resulted in two DNFs, which proved too costly in the overall result.

The Bruce Farr design began to show its potential with good performances at Auckland in 1971 then, in 1972 the real strength of the Farr-design was obvious as Don Lidgard’s Smirnoff totally dominated the JJ Giltinan world Championship on Waterloo Bay, Brisbane.

Smirnoff’s victory was so dominant that Bob Holmes was an immediate convert for the 1972-1973 season, and the 1973 Giltinan Championship on Sydney Harbour. Holmes made one extra request of Bruce Farr. He wanted a four-handed design, rather than Farr’s three-hander.

When Bob Holmes won the 1973 title in the four-handed Travelodge, it was the last four-handed boat to win a Giltinan Championship.

Bruce Farr continued to dominate the scene in both Australia and New Zealand with victories for Terry McDell (Travelodge New Zealand in 1974) and David Porter (KB in 1975), before Iain Murray boats became the next successful long-running 18 Footer design.

Sandwiched between the legendary sailing design gurus and growing high-technology world at the time, was the Kulmar Family, who won the 1976 JJ Giltinan world Championship in a skiff named Miles Furniture.

Miles Furniture was designed by the Kulmars and built by Les Kulmar (father) in the garage, under the family home. Once ready for racing, the two brothers Stephen Kulmar and Paul Kulmar sailed the boat, along with their brother-in-law Paul Ziems, and won the Giltinan Championship on Sydney Harbour in 1976.

The next breakthrough in the class came from New Zealand’s Russell Bowler in 1977 when, after progressing his ideas over a few seasons, he came up with a revolutionary skiff which pioneered a polystyrene core with fibreglass laminates construction, which was reportedly one-third lighter than the plywood boats.

Similar construction was used in boats built by Australians for the following season, although Iain Murray chose a different combination of materials to produce his future Color 7 hulls.

The original Miles Furniture and John Winning’s Pacific Harbour Fiji were the first to introduce small aluminium ‘wings’ on their hulls before Western Australia’s Richard Court took it a step further with the introduction of a sliding frame on Court Yachts.

The Australian 18 Footers League had been prominent with its expansion program during the late 1960s and pioneered regattas in California, USA. The club’s next step came in 1978 when it sent a team of champion skiffs to compete in an ‘Open’ World Championship, in Plymouth, England.

A promotional highlight of the 1970s was the huge spectator following during the 1979 JJ Giltinan Championship on Sydney Harbour.

Generated by the promotional backing of the championship’s sponsor (Channel 7 TV network), all vantage points around the harbor foreshores were packed with spectators, while hundreds of boats full of spectators also followed every minute of the action.

There were so many spectators at the Bradleys Head site that park rangers were forced to close the approach road, and it was estimated that 10,000 people followed the weekend races.

It was a magnificent decade, but like all ‘highs’, it was followed by some low points.

The costs associated with the new technology couldn’t be maintained outside the Sydney program and, along with the rapid design changes, resulted in the Australian 18 Footers League having to introduce a ‘single design hull rule’ which brought about a dramatic, positive change to the sport.

Fifty years on from the ‘Golden Era’, the Australian 18 Footers League continues to promote its high class racing, highlighted by live streaming of all its races through each Australian summer.