The Fishermen of Nicaragua 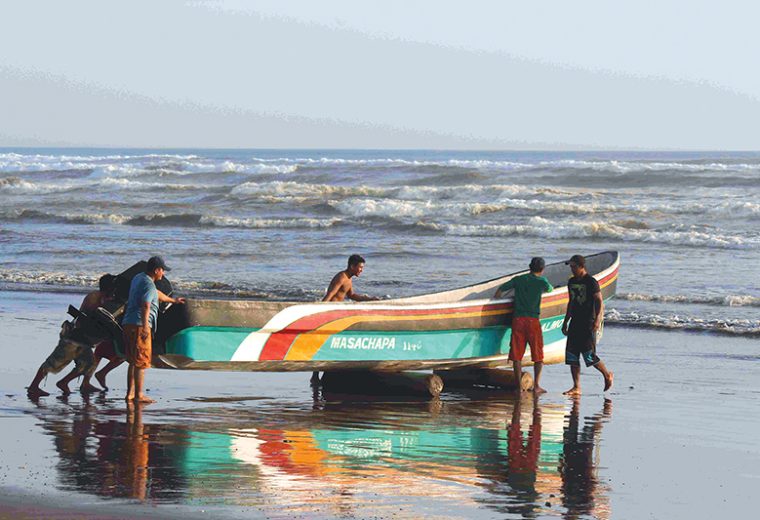 The sea plays a major part in life on the isthmus of Central America, with the Caribbean Sea to the east and the mighty swells of the Pacific Ocean to the west, reports Kevin Green.

It’s on this west coast that some of the hardiest fishermen ply their dangerous trade. Below the smoking volcanic peaks of Nicaragua, flat bottomed ‘lanchas’ surf the waves. With few ports on the 300km coast that borders Costa Rica to the south and Honduras north, the fishermen launch and return to the big surf beaches on waves that have run unimpeded across thousands of miles of open Pacific. This can be a deadly process for the outboard powered lanchas that have minimal equipment; no navigation aids or safety gear for the six men that usually work on them.

There are only 20 of us in the village I’m staying in and there are four fishing boats. We eat regularly from catches of red snapper, Spanish mackerel, tuna and many other of the 380 species from these rich marine grounds. The dry season (December to April) sees the village boats night-fishing with drift nets a few miles offshore for pelagic fish. In the rainy season (May to November), Nicaragua’s rivers swell and spew massive trees and other debris from the jungle-clad interior, making navigation very dangerous, especially at night when these men work. During the writing of this (May 2020), a fishing boat with five went missing from the nearby town of Masachapa in strong westerly swells. There are no rescue services but the Nicaraguan Navy was alerted, and the town locals tried to raise money for an air search. The lost men were aged in their 20s and the skipper was in his early 40s; grieving families and children gathered on the beach at Masachapa – the only pier was swept away in a storm some years ago.

A sombre mood swept over our village during the ensuing days, however the lure of the sea continued for the fishing fleet because May heralds the start of the most lucrative season, when the lobsters move inshore. The market for them is Nicaragua’s rich neighbours in the north, the Americans. Despite invading the country several times, the most recent was clandestinely in the 1980s during the Sandinista-Contra civil wars; and currently running sanctions against its President Daniel Ortega and his ministers, Nicaragua’s socialist government continues to do business with its powerful near neighbour.

Miraculously, the missing fishermen were found after 11 days drifting 90 miles offshore, when a Nicaraguan Naval frigate spotted them. Dehydrated and weak, the men had survived on dried fish. Their boat, named Mahidi, had a single powerful outboard like all the fishing boats, and it had failed.

As the second poorest country in Latin America, where daily wages are only a few dollars, fishing feeds many in Nicaragua. Ceasing work is not an option, so the markets remain busy and the men still go to sea despite coronavirus. Living among these people during the pandemic has been worrying because the rural population have very little medical help or advice. Our neighbour’s sister has just died from Covid-19, leaving three children behind, as has a 63-year-old local pastor. Nearly half its 6.6 million population, who are predominantly young, live a rural life farming the rich volcanic soil where coffee, fruit and vegetables flourish. Along the west coast about 45,000 fishermen work these waters, returning to tiny hamlets like ours where electricity and running water are rare. Literacy is another rare commodity, many of my fishing friends have never attended school so the sea is often the only money earner. Clean water is also limited and our newly dug well gives water to share with our neighbours, and we have built them a septic tank. Small gestures from us friendlier invading ‘Gringos’. 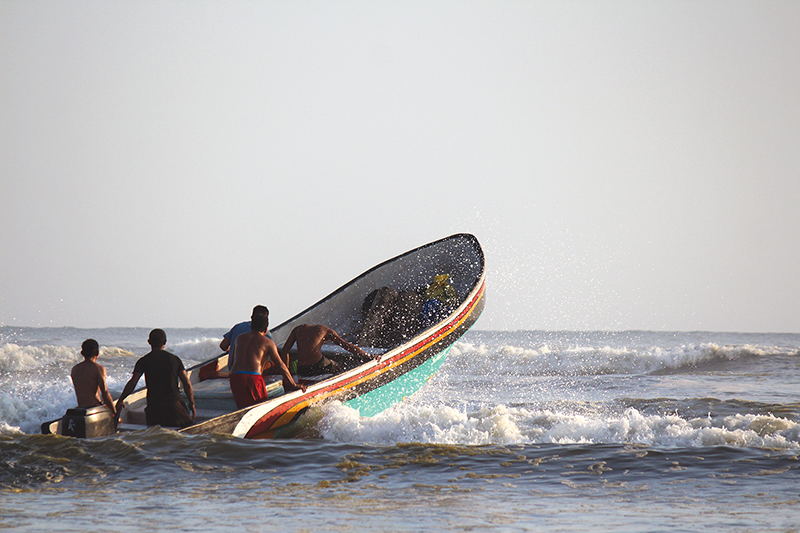 Our neighbour Isaih has worked on the boats for many years, to support his wife and two children who live in a village a few miles from the coast. “The money is good in the high season,” he tells me in Spanish. He is one of five regular crew but has to take on several jobs to support his family, including being a night watchman and doing forestry work. Some of the richest tree plantations in the region are nearby holding mahogany, teak and cedar. Mostly owned by foreign investors, locals are often employed to harvest the wood and replant but weed clearing in the fast-growing jungle environment is the main occupation. “Lobster season is good for us, during the wet, when they come inshore and we dive for them,” he says. Isaiah, comes from a family of 14 children and his mother Leone and father Alexis live beside me. The family are itinerant workers, mostly looking after properties for absent city dwellers and some foreigners. One of Isaiah’s brothers, Ever, also works on the fishing boats and is a friend. “I damaged my knee recently but I still have to go fishing, as there’s no money otherwise,” he tells me. Prices are low so only USD$3 for three pounds of quality fish like tuna or red snapper. Fishing culture is macho and fights, along with hard drinking, takes its toll on the men and their families. Some numb the pain of it all by taking crack cocaine and the powerful cane liquor that sells for 50 cents a bottle. Some do this at sea.

On the Caribbean coast, the fishermen are recruited by the Columbian drug cartels. Some simply work as look-outs to pass messages announcing the coast is clear, others may supply fuel and some of course move the illicit cargoes. The rich social history of the Caribbean region, known as the Miskito coast, named after the prominent indigenous tribe of that region, is centred around the town of Bluefields but stretches all the way north beyond Puerto Cabezes near the Honduran border.

Named after the pirates who established it, Bluefields has been isolated in the jungle from the rest of the country throughout its history, only having road access in 2019 and more recently becoming a semi-autonomous region. Roads are mostly built of bricks in Nicaragua, which can be easily fixed after the seismic activity the region is known for.

So Bluefields minds its own affairs rather than seeking advice from the nation’s capital in Managua. The socialist Sandinista government returned land to indigenous tribes around this region and elsewhere, but friction between large farmers and locals has led to violence; in January 2020 several people were murdered. The demographics are very different here, compared to the rest of Nicaragua, as many Caucasian pirates arrived along with escaped African slaves because the region was beyond Spanish hegemony. These all mixed with the Miskito and Rama indigenous tribes to create a unique race, eventually with a common identity. English is the language of some, while others speak Spanish, along with local dialects. This dates to when English privateers and pirates made informal alliances with the Miskitos.

Notable among the privateers was William Dampier, who would go on to explore Australia, but most famous among the pirates was Henry Morgan who sailed from the pirate stronghold of Port Royal, Jamaica. Morgan led a daring raid west up the Rio San Juan in June 1665 in a fleet of canoes to overcome the rapids and shallows. His pirate band then crossed Lake Nicaragua, a vast waterway, the third largest in Latin America, to reach the grand Spanish city of Granada. He ransacked it, before escaping back to the Caribbean Sea with plunder and captives but making Miskito alliances on the way.

Pirates like Morgan actually founded more cities in Nicaragua than they ever ransacked, including Pueblo Viejo and several surrounding towns in the Segovias on the Caribbean coast. Most famously Bluefields was named for founder Abraham Blewfeldt, a Dutch pirate who hunted Spanish galleons and other nations between Rhode Island and Panama. These illicit activities eventually led to El Castillo being established in 1673 as a fortified bastion on the Rio San Juan by the war-weary Spanish. Most famously it was overrun by Lord Horatio Nelson during one daring raid in 1780.

The 8,264 square kilometre Lake Nicaragua is a veritable inland sea with far horizons and hundreds of islands. It is home to a unique ecosystem including indigenous sharks and the famous Tarpon, sought by international game fishermen. Around the lake are small hamlets with fishermen who operate from dugout canoes using throw nets. Prominent in the middle of the lake are the two volcanic peaks on the island of Omnitepe. A tourist destination and also a jump-off point to the Solentiname Islands artisan community in the south and the exit to the sea via the San Juan River, the picturesque Omnitepe features on many tourist brochures. Easy sea access has led to this region being developed as a second canal zone by a conglomerate of local and Chinese investors, as much of the waterway towards the Pacific is naturally in place. However, a global and local outcry, including from neighbouring Costa Rica, has seen the project stymied for the moment. It would impact the largest natural region outside the Amazon basin, through the Reserva Biologica Indio Maiz Park, should it go ahead. This wilderness is home to jaguars, howler monkeys and hundreds of bird varieties including the national emblem of Nicaragua, the bright blue-tailed Guadabarranco.

The Caribbean coast is one of the most touristy regions in Nicaragua, thanks to pristine beaches and picturesque landmarks like the Corn Islands; a day’s boat ride offshore. Beneath these azure waters lurk the so-called ‘red gold’, the spiny lobsters. These are caught by hand, by fishermen who dive from a mothership. Diving is done usually by pairs working on small skiffs that leave the mothership. Equipped with air bottles, these men go deep, often to 180 feet, while a partner follows their bubbles on the surface in order to retrieve the lobsters handed up from the diver. In exchange, the diver receives a refilled air bottle to recommence his work.

This is a very dangerous occupation given the decompression hazards of continuous diving, with around a dozen dives completed daily. (By comparison and to follow safety standards, recreational divers like myself dive once to a maximum of 50 metres and maybe do one 10 metre shallow dive per day.) These motherships leave from mainland ports such as Puerto Cabeza with 40-50 men aboard, who may spend around 10 days at sea in search of the lucrative lobsters. Away from help, decompression sickness can’t be treated so many are permanently disabled. Others can suffer from Nitrogen narcosis (the ‘narks’ as we divers call it), leading to hallucinations underwater, which can be fatal.

Nevertheless, their lucrative diving goes on. Returning to the mothership, lobster tails are removed from the body before they are weighed and put in an ice hold. On board, conditions are typically cramped and busy. Air compressors throb constantly to refill the many empty air bottles while the men rest. They also rely on the company to supply them with victuals, which are deducted from their pay at the end of the trip. It’s understood that some of the larger boats have their own priest aboard to both console and help the men in time of serious injury. In this predominately Catholic country, religion is often seen as the ‘opium of the poor’ so religious festivals such as Semana Santa (Easter) are celebrated grandly, even in our tiny hamlet on the Pacific coast.

This year, despite the threat of coronavirus, stalls appeared selling food, beverages and trinkets along our shore while an impromptu nightclub blasted out ‘doof-doof’ music non-stop for the four-day holiday. The celebration aptly illustrates the sunny nature of the Nicaraguan people who, despite a history of hardships, remain a buoyant nation. Well worth a visit.