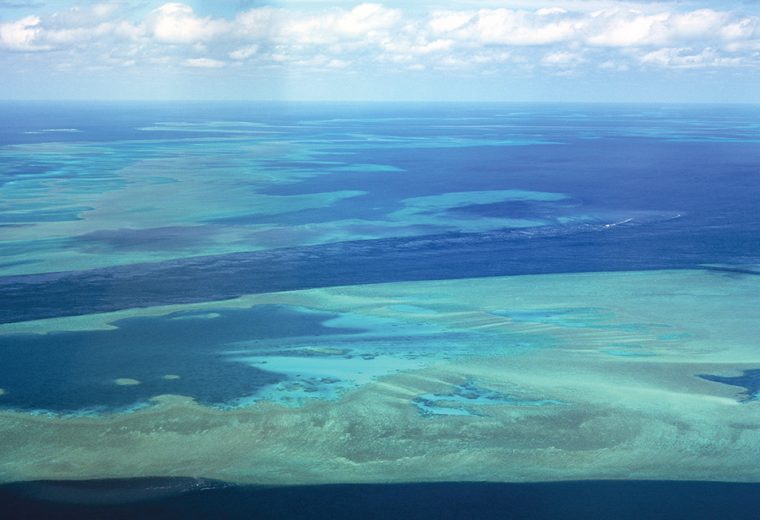 How Endeavour survived shipwreck on the Great Barrier Reef

At noon on June 12, 1770, the Endeavour lay heeled three or four strakes to starboard with all five of the ship’s anchors positioned in a fan pattern astern and out to the west. All anchor lines led back aboard with turns around the capstan and the windlass. At nine that night, with the bark upright on the rising tide, the leak began to gain on the pumps and everyone on board became aware they might plunge to their destruction once the ship came off the reef. “With anxiety written on every face”, Cook gave the life or death order to heave. Every Jack Tar, gentleman and officer heaved and pushed, sweating at the capstan bars and handspikes as the lines became bar-taut with the strain. The slow clank, clank, clank of the iron pawls on the windlass drum sounded each tiny gain and at 20 minutes past 10 Endeavour suddenly slid aft with a rush into deep water. But after 23 hours stuck fast on the reef, her ordeal was far from over.

Next came the dreadful moment when a simple error in measuring the depth of water in the hold “caused fear to operate on every man in the ship”. It also led to redoubled efforts on the pumps and for the first time, a perceptible gain on the water level. All but one of the anchors were retrieved, the fore-topmast was sent up and the bark again made sail as she headed in toward two low woody islands that Cook, with very good reason, named the Hope Islands.

With the ship under way again, midshipman Jonathan Monkhouse approached Cook with a bold if somewhat novel suggestion. He had once been aboard a ship in a similar situation in which the crew had saved her by fothering the hull. Without hesitation Cook agreed and placed young Monkhouse in charge of the operation. This involved stretching a studding sail on deck and stitching fist-sized balls of oakum, wool and even dried sheep’s dung in the centre so that with ropes tied to the four corners it resembled a very large bandage. The fothering was hauled over the starboard bows and dragged tightly into position so that the suction into the leak caused the junk to plug the hole. The fothering worked so well that the men could dry the bilges and keep the water out by using just one pump.

On June 15, with the pinnace and yawl sounding and signalling ahead, Endeavour coasted northwards along the shore searching for a snug cove in which the bark might be careened. Two days later Cook found exactly what he was looking for at the mouth of a river which had “every natural convenience we could wish for in laying the ship ashore and heaving her down for repairs”. Cook himself buoyed the narrow channel and after a bit of touch-and-go in which she grounded twice, Endeavour was warped in so close to the steep bank that her topmasts and yards could be used to build a staging from ship to shore. Tents were set up to accommodate the eight members of the crew sick with scurvy. Anchors, stores, ballast, gunpowder and provisions were also sent ashore together with the armourer’s forge, to fashion iron nails to repair the ship.

With the bark hauled down on her larboard (port) side the crew cleared coal out of the forehold and found water gushing in from a hole just aft of the foremast, three feet above the keel. At high tide, Cook ordered Endeavour to be warped in closer so that at low water her head was high and dry and her stern down in the shallows. Now they were able to see just how close they had come to disaster. Part of the false keel and the hull’s sacrificial sheathing of pine were torn off, while four planks three inches thick were cleanly sawn through. There was scarcely a splinter to be seen and the hole looked as if it had been cleanly cut by a very sharp axe. “By a most extraordinary piece of good fortune” a lump of coral “about half a yard square” was firmly lodged in the centre of the hole, forming a plug. This, together with the fothering wool and oakum which clung to its edges, was all that lay between the Endeavour crew and a watery grave.

After eight days of intensive work under the expert guidance of the ship’s chief carpenter, John Satterley, the hole on the starboard side was repaired and weed and barnacles scraped off the hull. Now Cook gave orders for Endeavour to be heaved over about 17 degrees on the starboard side, which exposed two planks on the larboard bow that were half cut through about six strakes above the keel. These were replaced and sheathed by the carpenter and his offsiders.

While the repair work was underway, Banks and the scientists were ashore botanising. It was here that they saw “grey mouse-coloured” creatures that bounded about on huge hind legs and easily outdistanced Banks’ greyhound. Lieutenant John Gore, the Virginian, was a determined hunter and shot two of the kangaroos, one weighing 28 pounds, which Cook ordered be cut up and shared in equal portions among all those onboard. Cook applied those principles of fairness to the fish they caught in the seine and the giant clams and turtles taken from the reef.

Poor Banks discovered that many of his botanical specimens stowed deep in the hull, right aft in the bread room, were submerged in salt water while Endeavour was lying stern-down for repairs. Some were completely ruined but he brought others, and the paper in which they were pressed, ashore and laid them out to recover on dry grass. With the temperature at 87°F in the shade, that did not take long.

On July 10, 1770, Endeavour’s company had their first encounter with the indigenous people when four naked Guugu Yimithirr Bama men appeared on the opposite bank of the river and stood in silence, looking at the ship. Cook put off in a boat to speak with them but they ran away. The following day four more men arrived in an outrigger canoe from which they speared fish. Cook gave orders that no notice was to be taken of them and this seeming indifference encouraged them to land close to the ship where they held their spears and woomeras in an attitude of readiness to retaliate should they be attacked. Tupaia (the Tahitian) prevailed upon them to lay down their arms and sit down with him where they were given gifts of paper, nails and ribbons. Cook tells us “their eyes were lively and their voices soft and tuneable”, and yet Tupaia was unable to understand one word they said.

On July 18, several Aboriginal people, who now seemed to have lost all fear of the Englishmen, went on board Endeavour and seemed “much amazed” at the 12 turtles they saw on deck. Cook left them and with Banks hiked six miles to the summit of a high hill “which afforded the most melancholy prospect of the dangers that lay ahead”. In whichever direction they looked they saw vast shoals with no opening to the sea, except through the dangerous winding passages between them.

On July 19 a dozen Aboriginal people boarded Endeavour and made it plain they wanted one of the turtles on deck. Banks took the view that this hard-won food from the reef was the one thing they could least afford to give away. He refused to hand over the turtle and was pushed out of the way. The same appeal was made a second time, but again was refused. This was a serious mistake on the part of Joseph Banks Esquire. Suddenly the indigenous Australians leapt into their canoe and paddled ashore where one of them snatched up a handful of dry grass and taking fire from under the pitch kettle, began to ignite the tall, tinder dry grass to windward.

The grass burned with great fury and Banks was obliged to dash ashore with some men, strike his tent and drag it down to the beach. The ship’s sow and her litter of piglets was ashore grazing and one was caught in the blaze and burned to death. Cook was furious. He seized a musket loaded with birdshot and fired at the man with the firebrand from a distance of 40 yards. He dropped the firebrand and escaped into the mangroves. In an attempt to demonstrate he was not yet beyond reach, Cook fired another shot, this time loaded with ball. Cook and an armed party followed the group for a mile before the Englishmen stopped, sat down on a rock and beckoned the men to come to them. An old man came forward carrying a spear without a point, a symbolic act that he meant them no harm. Cook reciprocated with gifts of trinkets “with which they seemed well pleased”. The site of this significant meeting – two prominent hills – is still referred to by the Guugu Yimithirr Bama people as “Reconciliation Rocks”.

By July 20 all Endeavour’s gear was safely re-stowed and the bark, hauled off the shore, lay at anchor ready for her departure as soon as the wind served. But while the breeze continued to blow fresh from the south-east, Endeavour remained weatherbound within the river bar. On July 23 one of the crew sent ashore to gather feed for the livestock came unexpectedly upon four aboriginal men sitting around a campfire roasting a cockatoo and the hindquarters of a kangaroo. The crewman had sufficient presence of mind to sit down among them, showing his seaman’s knife which they examined with the greatest interest and then returned to him. With great curiosity they felt his hands and other parts of his body and then indicated that he should go. When the seaman lost his way in the bush they directed him toward the ship.

When Banks was botanising on the far side of the river he found abandoned in a heap many of the clothes given to the Aboriginal people. If Banks had looked further he undoubtedly would have found the trinkets and other trifles that were also gifted. Having carefully considered all he had seen and experienced among the Aboriginal people of New Holland, Cook sat down and wrote a journal entry. He concluded they were “in reality far happier than we Europeans. Being so unfamiliar with the conveniences so much sought after in Europe, they are,” he said, “happy in not knowing the use of them. They live in a tranquillity undisturbed by inequality while the earth and the sea furnish them with all they need.”

In the next issue Bruce Stannard concludes his 250th anniversary tribute to Lieutenant James Cook, Commander of the Endeavour Bark.