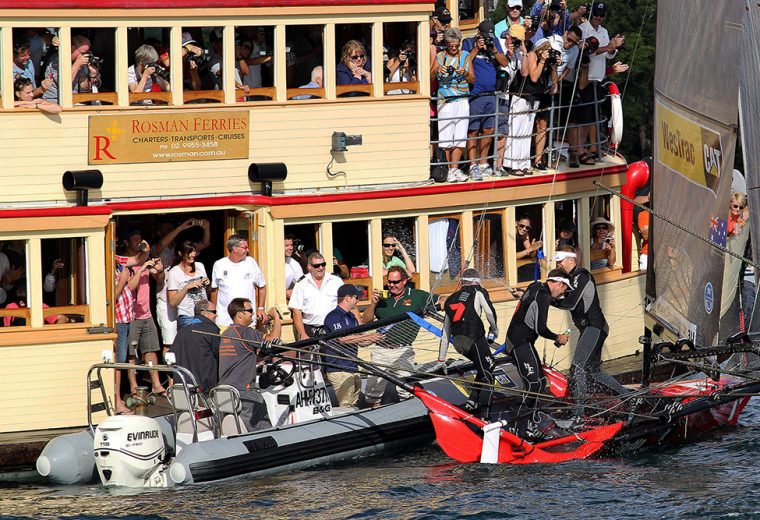 When Mark Foy formulated his plan to popularise sailing as a sport on Sydney Harbour in 1892 a critical component of his plan was a spectator ferry, which would become a floating grandstand to give patrons a close-up view of the action-packed racing.

The success was instant and has maintained its relevance to 18ft Skiff Racing over the intervening years. Spectator ferries follow the Australian 18 Footers League’s ‘modern boat’ racing each Sunday during the season, and the Sydney Flying Squadron’s Historical 18s racing every Saturday during the summer months.

All racing up to the mid-1930s had been conducted each Saturday by the Sydney Flying Squadron prior to a massive change, which occurred when a group of unhappy competitors split from the SFS to form the NSW 18 Footers League (now called Australian 18 Footers League) in 1935.

With two clubs having to share the harbour each weekend, the newly formed League began to race each Sunday while the Squadron continued on Saturdays.

It was a situation which created the greatest era of 18 Footer ferry patronage since Mark Foy’s first day.

Ferry patronage at the SFS races had always been good but the change was unprecedented.

In the mid-1930s there was absolutely no major sport being staged on Sunday. In particular, members of the nearby racing industry, and the punters who regularly followed their ‘favourites’ with gambling, flocked to this new Sunday form of racing.

There were reports that up to seven spectator ferries followed each race over the League’s seasons between 1935 and 1939.

In 1937, the League’s Secretary, Mr. James Joseph Giltinan conceived the idea of having a Worlds 18 Footer Championship on Sydney Harbour to coincide with Sydney’s 150th Anniversary in January 1938.

The original championship regatta in 1938 was a huge success, which The Sydney Morning Herald newspaper described on the day following the first race: “The grip that 18 footer sailing has on the Sydney community was clearly demonstrated yesterday when a record crowd watched Taree win the first heat of the world championship on the harbour.”

“The crowd at Circular Quay was so large that extra steamer accommodation had to be provided at the last moment, while craft of almost every conceivable description were in attendance. The foreshores, particularly Bradley’s Head and Steel Point, were thronged with spectators.”

The League President Horwitz announced at the beginning of the 1938-1939 season: “There can be no doubt that the modern type 18-footer appeals to the sporting instincts of every Australian as is evidenced by the fact that our patrons increase in numbers as each season progresses. Two seasons ago we felt proud of being able to record 150,000 patrons for the season. Last season (1937-1938) we were just under the 200,000 mark.”

Shortly after the president’s euphoric announcement, racing was interrupted by world unrest in the late 1930s-mid 1940s, then when more professional sport began to emerge each Sunday, it caused a decline in ferry numbers.

Australia’s love of gambling, which was a significant part of the peak in the 1930s, also ensured that spectator numbers would retain a healthy level as there were several bookmakers prepared to’ ply their trade’ on the spectator ferries at every race day.

The spectator ferries during the period between the 1940s-1980s were chartered by the two clubs mainly from the state government, which provided an amusing situation. The government-owned ferries clearly had “absolutely no gambling permitted” signs fixed to the internal structures, which the bookmakers were using to attach their ‘bookie boards’ with all the odds to the various gambling options available.

The extent of the popularity of the spectator ferry has always been strong and is shown as part of a 1979 article advising locals and tourists of ‘what to do on Sydney weekends’. “You can have an unforgettable afternoon on the Harbour in the ferries that follow the 18 footer yacht races. You don’t need to be a sailing enthusiast to enjoy this. By the time you’ve had a few drinks from the bar and bet a few dollars with the bookies on board, your attention will be riveted on these spectacular sailing boats.”

In the late 1970s, a police taskforce, nicknamed ‘Beck’s Raiders’ was formed to crack down on illegal gambling, and one of the areas they ‘raided’ was the 18 Footers spectator ferry. The result was a stinging criticism by the then Premier of NSW, Neville Wran, whose criticism earned the spectator ferry front page news on the following morning’s major Sydney newspaper.

Over the past 20 years, the spectator ferry has become a more ‘social’ way to watch the racing up close, but the change still caters for those wanting to ‘support’ their favourite team with more options than just a few cheers.

As well as the hardened racing enthusiasts wanting to see the skiffs speed around the Sydney Harbour courses, boat and other sponsors have also used the spectator ferry as a means of entertaining business partners and other associates as well as a vehicle to improve staff interest and morale as the employees support “their” boat.

Despite the COVID-19 restrictions placed on the number of patrons allowed on the spectator ferry, the Australian 18 Footers League has continued to maintain the service for its followers.

Club President, John Winning has a wonderful knowledge of the history of the 18s and said “it’s certainly a difficult time for all sporting organisations, but our club is determined to keep Mark Foy’s 1892 dream alive and continue to provide a floating grandstand for our 18 Footer spectators.”

Understandably, with the limited number of patrons allowed on the spectator each race day during the 2020-2021 season, booking online through the club’s website www.18footers.com.au is essential. www.18footers.com.au/18-footers-sailing/spectator-ferry/

For those unable to make it out onto the water, AeroMedia Live Broadcast team will be on Sydney Harbour to capture all the action. Live streaming is available at www.18footers.com by clicking on the ’18 Footers TV’ link.

Everyone can also follow all the club’s racing throughout the 2020-2021 Racing Season: