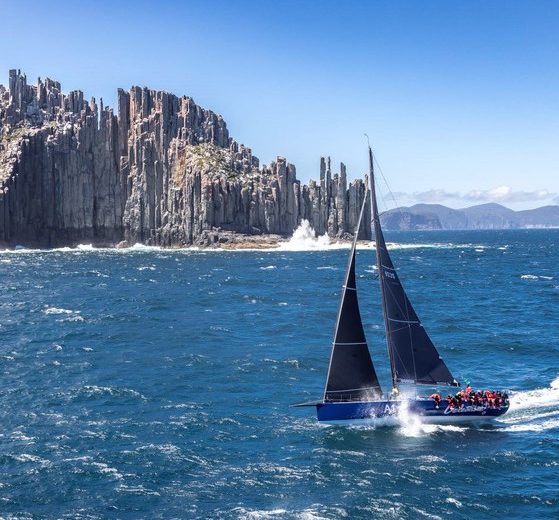 After more than a month during which the dockside pundits all made their various pronouncements about the controversial protest against Celestial in the 2021 Sydney-Hobart, two of the people most directly involved have now had their say.

Retired RAN Rear Admiral Lee Goddard, as Chair of the Race Committee, was the man who carried responsibility for the real-time management of the incident and its aftermath. He has issued a very measured statement on the applicable rules and principles by email to all offshore competitors via the Cruising Yacht Club of Australia.

Will Oxley was navigator aboard Ichi Ban, the yacht closest to Celestial when the incident occurred. He played a key role in the on-water procedures during the race and recently gave an extensive eyewitness interview to the Bar Karate podcast in which he details the events and their context.

Both responses can be seen as specific reactions to the rather heated flurry of commentary that has been aired on social media following the protest ruling by the Sydney-Hobart International Jury and their grant of redress to Ichi Ban. There has been no shortage of ill-informed opinion around the waterfront.

So, to revisit the facts: a PLB registered to a crew-member on Celestial was accidentally activated during the second night of the race. The Australian Maritime Safety Authority (AMSA) alerted the Race Committee to the automatic distress signal and asked them to investigate. Celestial did not respond to a Satphone call so the Race Committee asked the nearest yacht, Ichi Ban, to contact Celestial on Channel 16, the VHF safety frequency.

For the next hour all attempts to raise Celestial on VHF failed. AMSA scrambled an air rescue crew to be on standby at Essendon airport. Ichi Ban set off a white parachute flare, then finally attracted the attention of Celestial after firing a red distress flare. After 90 minutes of radio silence Celestial finally confirmed that all was well using a hand-held VHF in the cockpit. The AMSA rescue team stood down.

Celestial was the provisional handicap winner of the race with Ichi Ban second. The Race Committee then lodged a protest against Celestial for breaching the Sailing Instructions rule that requires all yachts to maintain a continuous listening watch on VHF16. Ichi Ban applied for unspecified redress to compensate for the disruption of having to attempt communication with Celestial for 90 minutes.

The Jury penalised Celestial 40 minutes and granted Ichi Ban three minutes of redress. This had the effect of reversing the boat’s positions. Ichi Ban became the overall Sydney-Hobart winner with Celestial in second place. Celestial then appealed the Jury decision but their appeal was dismissed.

Lee Goddard’s email to skippers begins with a straightforward acknowledgment of the disquiet that has been aroused by the protest penalty and grant of redress.

“Following the Rolex Sydney-Hobart Yacht Race,” he writes, “there has been some discussion in social media and around the Club relating to the sailing instruction for yachts to maintain a continuous listening watch on VHF 16. There has also been discussion concerning the appropriateness of a yacht which provides assistance, seeking redress.

The retired Rear Admiral then nails his colours firmly to the mast:

“The Race Committee wants to emphasise to the blue water sailing community that a continuous listening watch on VHF 16 is a fundamental safety requirement. Further, the ability to seek redress is essential so that a yacht is not discouraged from providing assistance to another yacht.

“The continuous monitoring of VHF Channel 16 is a requirement for all CYCA offshore races. When racing or cruising, it is essential that VHF is used to broadcast to all other boats in range. If a yacht hears a distress call on Channel 16, it may be in a position to help save someone’s life.”

Goddard then addresses (without naming him), the persistent criticism that has been aimed at Matt Allen, the skipper of Ichi Ban, for his application for redress.

“The first fundamental rule of the World Sailing and Australian Sailing Racing Rules of Sailing (RRS) states “a boat, competitor, or support person shall give all possible help to any person or vessel in danger.” We are all responsible for ensuring races are run in a safe manner.

“When racing, the RRS look to ensure you are compensated accordingly through redress. When it is possible a boat is in danger, World Sailing Case 20 states that any boat that provides help is entitled to redress. This applies to a boat whether requested or not, or if it is later found that there was no danger.”

While this statement from the Race Director certainly leaves no doubt as to the obligations of every competing yacht and the authority of the Committee, there are plenty of armchair sailors still wanting to debate the detail of the incident itself. From his navigator’s berth on Ichi Ban, Will Oxley provided this first-hand account:

“AMSA called the CYC at 23:53. At 23:56 they were unable to raise Celestial on the Satphone. So at 23:58 – five minutes after the call from AMSA – we got a call. We answered on the second ring. It was the CYC saying, ‘We haven’t been able to raise them. AMSA are concerned. We’ve got an hour before they will launch an aircraft.’

“We were asked if we can call them on the VHF. Every five minutes we called them. We spoke to Quest, we tried to have chatter on the radio so that eventually someone would go, ‘Oh, there’s a bit of chatter. What’s going on?’

“We got close to the hour and they’re going to put the aircraft in the air. I said, ‘Well, I can let off a white attention flare because I’m allowed to do that and maybe they’ll see that and listen to their radio’. We knew they were close. So we did that. Nothing happened. Quest saw the white flare and they were further away than Celestial.

“The first night no-one’s had any sleep. Now we’re into the second night. Instead of people sleeping in their bunks, every five minutes I’m talking on the radio. I’m digging around, I’m getting the flares ready, I’m talking on the phone. For an hour and a half we’re totally focused on trying to deal with this situation.

“The moment that aircraft goes into the air, basically, Celestial’s race is over if there is no problem because they have totally done the wrong thing. And how embarrassing for the CYC!

“We set off the red parachute, then a few minutes later we made another set of calls, and then Celestial comes up. And I’m, like, ‘Hello? Are you OK? You need to call the CY.’ I then called the CYC, told them that they were OK and that they would call them. For some reason they were unable to make the call but at that point AMSA stood down.

“It’s really important for people to understand that if we hadn’t gone that extra mile, there’s no doubt in my mind that Celestial would have been blown out of the race. And this is not the first time that I have done this for Celestial – this is not the first race in which I have stopped safety people coming to their aid because of lack of monitoring VHF.

“So for people to say that Ichi Ban is in the wrong here is totally bizarre. The race doesn’t matter a jot compared to looking after people. We, as fellow competitors, are most likely the ones that are going to rescue other people.”