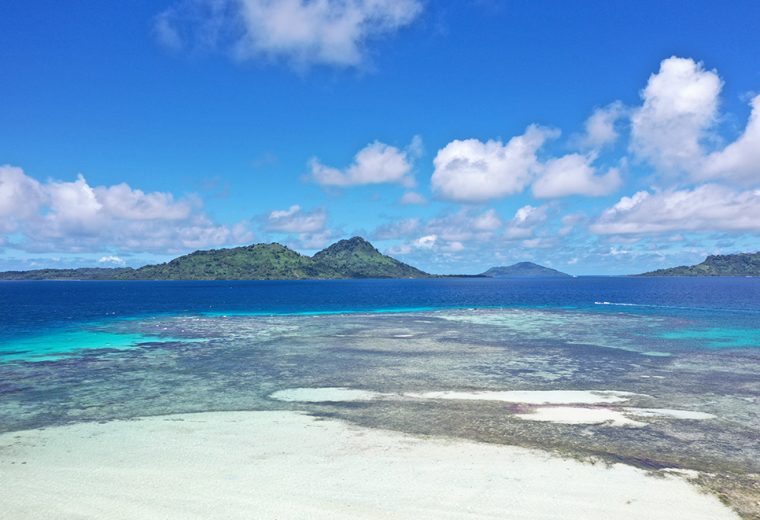 While some battles of WWII like Pearl Harbour, Guadalcanal and Iwo Jima are famous, the battle of Truk Lagoon is less well known, writes videographer Max Gleeson.

Truk or Chuuk Lagoon as it is now called was given to Japan as a prize for fighting on the allies side in WWI. Afterwards, Japan made it clear to westerners they were not welcome and set about building a large naval base, the largest outside of Japan during WWII. There were 40,000 troops based in the 40 mile wide lagoon. The fortress had such a reputation that it was once considered an early target for the atomic bomb.

During WWII the United States began an island hopping campaign that would lead them all the way to Japan. The campaign began in the Solomon Isles in 1942 and by February 1944 the US Navy had reached the Caroline Islands in the central Pacific and Truk lagoon. Two weeks earlier, a reconnaissance flight over the lagoon had spotted battleships and carriers in the shelter of the anchorage. The Japanese realised an attack was imminent and removed much of their battle fleet to Palau. As the US navy pilots took off in the early hours of the morning of February 16th, they all feared what they were about to face: a military base that had been prepared for such an attack.

However, the attack caught the Japanese by surprise. While Zero fighters rose to meet the vastly superior Hellcats on the first day, not one single fighter took to the sky the following day, leaving the remaining ships at the mercy of the Grumman Avengers. Over those two days the US Navy sank approximately 40 ships in the clear waters of the lagoon. About 2,000 men lost their lives in three light cruisers, six destroyers, 32 transport ships and 270 aircraft. American losses were comparably minimal, with only 21 planes shot down and most of the crews were picked up by US submarines.

Back in 2011, my dive partner Lesley Hillyer and I began the most comprehensive filming of the wrecks in Truk Lagoon ever carried out. In 2013 we released the first DVD, Shipwrecks of Truk Lagoon Vol 1. After 300 dives, nine years and 11 trips later the second in the series, Vol II has been completed. There’s a lot of interesting footage gathered in the DVD because unlike most wreck sites in the world, the ships of Truk lagoon were never salvaged. That is the reason why divers from afar come to visit this extraordinary dive location. This includes the battle tanks on the deck of the San Francisco and Nippo Marus, the trucks in the holds of the Hoki and Katsuragisan and the Zero fighters in the Fujikawa. Other items of interest include the encrusted portholes, binnacles and helms, so the diving is unmatched anywhere in the world.

The battle led to so many horrific incidents among the stricken ships that many of the stories have been lost in the magnitude of the disaster. The Aikoku Maru, covered in my first video was a large, modern passenger vessel that had only arrived in the lagoon hours before the attack began. On board were over 700 Japanese marines. A single bomb from a US dive bomber blew up both the ship and the attacking plane. Hit just five metres in front of the funnel, the ship just disappeared. There were only 20 survivors. Early footage of this wreck by the Cousteau Society showed cabins filled with the remains of the victims. Japanese divers in the mid-1980s brought most of the remains from this wreck and many others to the surface, where they were cremated in a religious ceremony on the shore.

An equally tragic story befell the Japanese destroyer Oite. The ship left the lagoon with a sub-chaser escort just before the attack began, taking the damaged cruiser Agano back to Japan. Lying in wait was a US submarine, which sank the slow moving Agano. Oite picked up most of the survivors and set a course back to Truk, only to be met by many attacking US aircraft. Seven hundred men from both crews manned the deck of the narrow destroyer. At a speed of 35 knots the ship cut a zig- zag course through the blue water north of the base. Oite’s captain was killed early in the fight by the strafing planes, forcing the Agano’s captain to take charge. However, it was all in vain as a torpedo scored a direct hit amidships. Only 20 men survived the wreck, the survivors swimming approximately five kilometres to a nearby island. We made 25 dives to this magnificent wreck which now lies split into two at a depth of 63 metres in clear water, so we captured some excellent footage of her. Her high pitched bronze propellers are a highlight of this dive. They turn a brilliant red when lit by the camera’s lights. The wreck lies 30 metres apart and is an easy swim from one section to the other. On one dive, we made a shocking discovery. Looking into a small opening we had swum over many times before, we found the remains of half a dozen crew. Who were these young men who had taken shelter in this tiny space only to spend an eternity together?

Truk also has the wreck of a Japanese submarine, the I169. These huge vessels, more than 100 metres in length were responsible for the loss of many allied ships during WWII, off the east coast of Australia. All these subs were based at Truk. The I169 was lost by accident in April 1944 when the crew responded to warnings of an impending air raid. While diving, a valve was left open and the vessel foundered in 44 metres, killing those in the forward compartment. Divers sent down the next day heard tapping coming from the aft section and a salvage attempt soon began. By all accounts that was going well, with the wreck breaking the surface, only to have the cables snap, sending those still alive to their deaths. Explored for the first time in 1971, divers entered one of the hatches and into the engine room. Positioned right on top of the motor were the remains of most of the crew. The reason for that position, according to the divers, was that the crew were maximising their remaining air.

For the locals, Truk Lagoon attack marked the end of fairly friendly relations with the Japanese. After the attack supplies to the island dwindled and competition for food between the locals and the Japanese caused tensions until the end of the war. The filming takes the viewer from stem to stern on each wreck. Into the near pristine engine rooms, with chain blocks still attached to the roof and around cargo holds full of ammunition and plane parts with thousands of Sake bottles. Drones have opened a whole new chapter in photography and each chapter begins with some excellent footage of the islands. 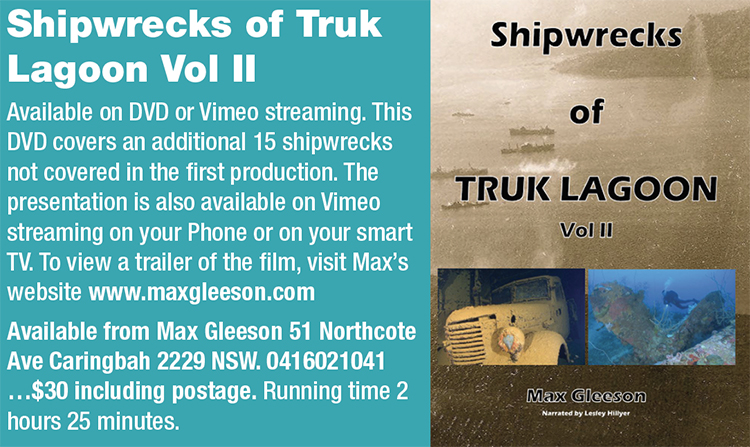