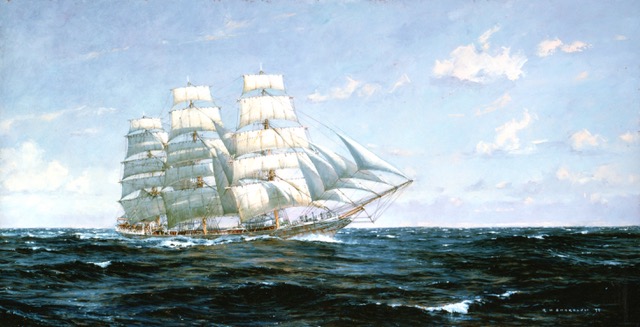 Australia’s pre-eminent marine artist, the Albany-based Ross Harry Shardlow, has been honoured with Membership in the Order of Australia. The official recognition, announced by the Governor General in this year’s Queen’s Birthday Honours, is a fitting tribute to Shardlow’s extraordinary artistic talent and to his meticulous eye for detailed authenticity – qualities that have made his artwork famous throughout the world. The distinction also marks the well-deserved recognition of Shardlow’s life-long dedication to the preservation of Western Australia’s maritime heritage. Bruce Stannard salutes a man who continues to make an outstanding contribution.

There are times when the life of an artist, no matter how talented, hangs all too literally by a gossamer thread. Ross Shardlow knows all about that. On January 30, 1989, he and his wife and Muse, Barbara, were sitting high on the grassy slopes of Albany’s Mount Adelaide watching the white-capped waves surging across the spectacular indigo waters of King George Sound. Ross had made a commitment to devote his life to marine art but things were not working out as well as he had hoped. He was then completing the second of his two commissions from Bond Corporation, portraying the Endeavour Bark drying her sails at anchor.  A stickler for historical accuracy, he was far from happy with the interference he had received on the ship’s rig.  He knew from his own extensive research that Endeavour’s mizen mast should have been 10 feet higher than it was to be on the Endeavour Replica, then being constructed in Fremantle but no amount of argument of his part was able to correct what seemed like a clear-cut error. 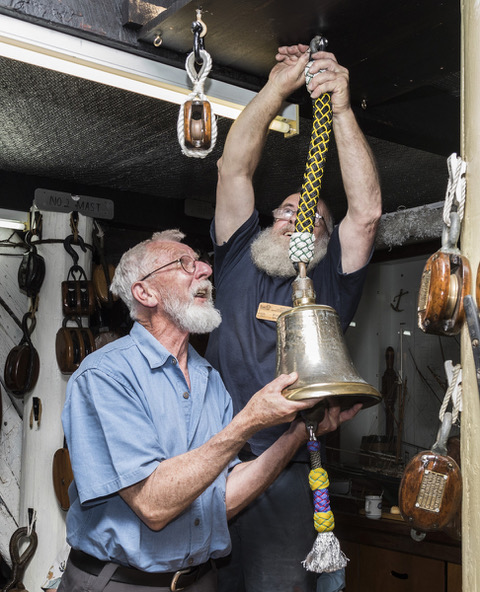 “I was a bit disenchanted with the Endeavour Project,” he says “and a bit disenchanted with trying to make a go of it as a marine artist. I was seriously thinking of chucking the whole thing in. Then this happened:  the (sail training barquentine) Leeuwin, unbeknown to us, was inside Princess Royal Harbour and just in our moment of despair, she came sailing out through the entrance (at our feet) and beat out into the Sound. I could not believe it.” Ross had designed Leeuwin’s lofty masting and rigging and had worked as naval architect Len Randell’s assistant.  It was as he puts it “a remarkable maritime moment that was part of my own creation. I think the ghosts of mariners past had a hand in that.” He was thrilled to see the ship from above,  heeling to the building breeze and sailing so beautifully balanced. “That was my epiphany,” he said. “I decided on the spot to recommit myself to being a marine artist and Barbara would join me as my Partner in Time.” That was an excellent decision.

Ross completed his painting of Endeavour at Anchor and later that year (1989) with help from Graeme Henderson, formed the Maritime Heritage Association, the community organisation which was instrumental in saving Fremantle’s historic maritime precinct. He continued to work on the Endeavour Replica, designing the bark’s distinctive carrick bitt heads, the quarter badges, the acanthus leaf carvings across the stern and with Barbara as model, the modestly draped figures of Saint Hilda (Patron Saint of Whitby) which adorn the quarters.

Ross Shardlow has been kept continually busy as a marine artist, working on commissions for private collections, commissions from the Mystic Seaport Museum in the US and a series of stamps for Australia Post. In 1998 he joined the newly-formed Sydney-based Australian Society of Marine Artists. His painting depicting Leeuwin Beating Out of King George Sound was exhibited at the Australian National Maritime Museum and won the inaugural ASMA President’s Medal in 1999.

Barbara Shardlow continues to play a seminal role in her husband’s work. A former Perth librarian, Barbara focuses on exacting historic research, collating the myriad of detail that informs each and every one of her husband’s paintings. The Shardlows live and work in the early 20th century cottage ‘Sea-Quell’ overlooking the Harbour at Albany.