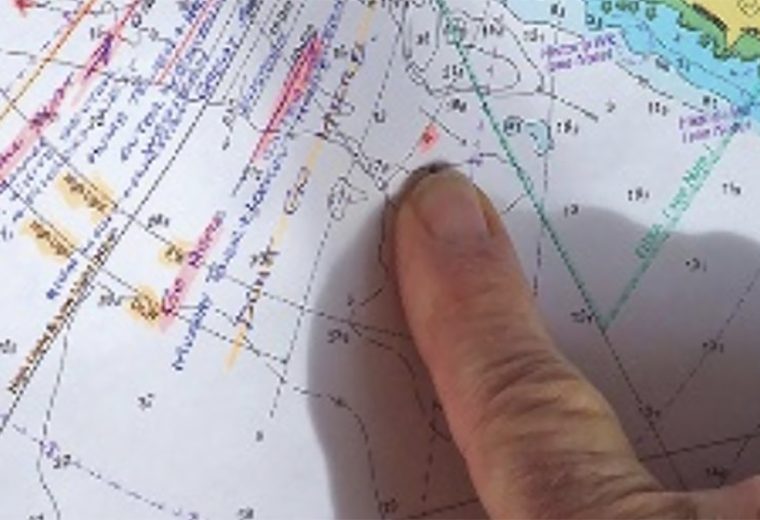 Unlike, Paper, Rock, Scissors, this is no game and literally, utterly deadly serious. The following article provided by Pantaenius Insurance is actually about more traditional forms of navigation and your obligations as a skipper. It is the definitive statement in the great digital versus analogue debate.

GPS and Chartplotters have been a tremendous development aiding in both the accessibility and ease of use when it comes to navigation. As such, they have also introduced a whole new category of sailor to the wonders of the ocean. However, the perception is incorrect. It is the Skipper’s responsibility to have Admiralty (Hydrographer) Charts with them. After all, safety at sea begins and ends with you.

If you’re familiar with Daylight Savings, then you know that when you change your clock, you’re meant to change the battery in your smoke alarm. How is this pertinent? Well have a look at this analogous situation. Think of changing your clock as changing your cruising locale. You’re required to notify Pantaenius Insurance of this, but it should also be a trigger for you to go out and get the corresponding, and up to date charts. Your ‘batteries’ if you will.

You see 95% of the world you want to explore does actually require you to have paper charts on board and use them. It’s also mandatory under your Pantaenius policy to carry the appropriate ones for your current cruising area and also meet that country’s statutory safety regulations. After all, you would hate to be in a catastrophe and for the insurer to discover you do not have any or the correct charts on board.

Now if you think it can’t happen to you, then reflect on the fact that some of the world’s best parked their boat on the Cargados Carajos Shoals in the Indian Ocean. Team Vestas Wind went up on the bricks doing 19 knots because of an over reliance on digital charts. Even if you zoom right in, you can miss things and sometimes the material is not even there and words like ‘incomplete’ can pop up.

Clear, additional marks and notations serve as sage reminders for this careful Mariner.

Equally, it is not about whether you grew up with Loran C or Radio Direction Finders, let alone star charts or sun shots from your sextant. It is about knowing things like dead reckoning, fathom lines, chronometers and tide tables, along with the thorough planning of your passages, not getting over-tired and ensuring you have done everything to gain some local knowledge. Included here are items like giving 5-6nm to the rocks around Lord Howe Island and also those on the way from Brisbane to Noumea. Yes, even the surveys don’t have them accurately positioned, and some references have St Brandon that Vestas hit being around 3nm Sou’west from where it actually is!

Tim Cox is the Race Director at the Cruising Yacht Club of Australia and is an ardent proponent of the need for complete navigation, as it were. Only recently he raised the subject of paper charts during a briefing for the Bluewater Pointscore, which uses a lot of coastal features as marks of the course. Equally, he is clear that this is an important subject for racers, delivery crews and cruising sailors alike.

“Electronic charts are a fantastic aid, but that is just the point. They are not the sole tool you have at your disposal or should be using, especially when in close proximity to shore or known obstacles. Paper charts have more data on them, are more reliable and more up to date, as a whole. It is important that Navigators and sailors understand the terminology of the maritime environment such as Chart Datum – the basis for measurement of depth and tide. Passage planners must consult relevant publications, such as the Australian Pilot or other publications, as they alert mariners to danger”, said Cox.

“The biggest issues we see with electronic charting is that the operators use the wrong scale, don’t look for detail or it may not be there via updates. The Notice to Mariners system for paper charts does ensure that the best information is available to the consumer. Remember that the notes on a paper chart will detail how accurate it is and also the time of the latest survey. This could be the 1960s or way, way earlier and back to the brilliant Cook and his armada of Junior Officers.”

“You must use paper when going in close. Too many use the wrong scale on a chartplotter in this scenario. There are accuracy and GPS issues to consider as well. More often than people know the satellites could have you up to 200m out of position.”

“No matter which Hydrographer is providing the electronic chart, they produce packages and the resellers just simply do not purchase the most expensive ones. Things are not down to the final inch at all. You must use everything you have at your disposal; electronic, GPS, paper, Pilot’s etc. The electronic distance to known coastal landmarks can vary by 50-200m; so how much room do you want to leave, especially at night? The Maritime Authority indicates that if you are inside a cable, then you run a risk. We feel 200m to the likes of Bird Island and Flinders Islet, for example, is well and truly close enough.”

“Overall, the closer you go to known danger, the more attention you have to pay to knowing the local environment. Equally, experience and number of crew on board are critical factors. In my opinion, delivery crew, where there both reduced numbers and overall experience, have no business being less than 2nm offshore”, Cox finished by saying.

So in summary you can see that it is a combination of sticking the head out of the companionway stuff and then there are also Pilot Guides, books, magazines, websites, Google Earth, people at your yacht club, along with those you visit and the skill tests that some of them run. Equally, you can ask a lot of your Pantaenius team. Countless years and swags of nautical miles add to a deep pool of knowledge and an impressive set of contacts.

They put a lighthouse on South Solitary Island to assist with navigation, but do you know exactly where it is?