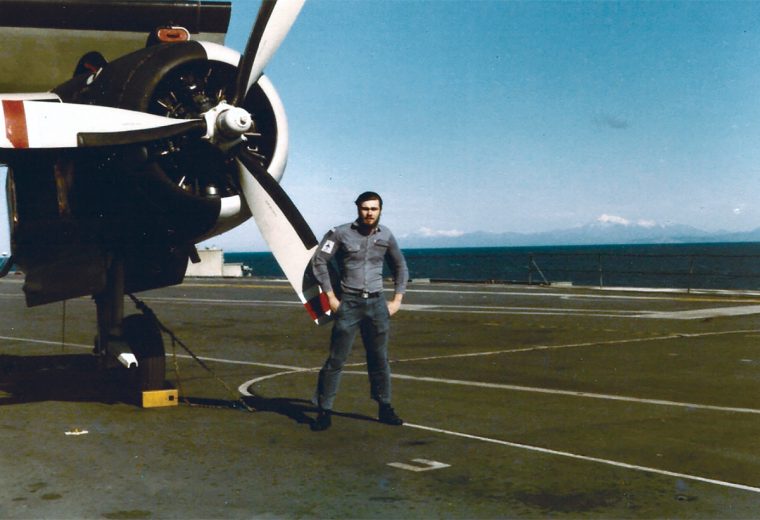 It had been 40 years since I had last laid eyes on some of the attendees but it seemed as though only weeks had passed rather than decades. The reunion was for the Naval Meteorological Service and it was at the Naval Air Station Nowra where my meteorological journey began. Training for many months in an old and cold wooden classroom, learning the various types of weather, cloud and weather symbols by rote, did my head in but there was no other real way of learning all these codes. In those days the naval weather service was larger than it is now as many of us were employed on HMAS Melbourne, our only aircraft carrier operating at the time and at the Naval Air Station.

The Meteorological staff of the aircraft carrier consisted of two forecasting officers, one Chief Petty Officer, and five able seamen, the office ran 24 hours a day. There was also a leading seaman Met sailor but he was employed in being the navigator’s assistant. The Met Office onboard Melbourne was not really that dissimilar to any Met Office of the time, although a lot smaller. Information came in and was plotted onto synoptic and upper air charts. Other graphical information arrived by fax. When the plotted charts were complete they were analysed by the Met Officers and they derived the forecasts for the ship and more importantly, the aircraft. Everything was done manually in those days; now all computerised. Recording meteorological information was a constant, but recording was much more frequent when flying operations commenced. We even used to release weather balloons, but tracking these from a moving ship that changed course a lot was problematic, winds were calculated by using a slide rule.

To access weather data we had several HF receivers that needed constant tuning. These HF receivers received broadcasts that gave the time and place the information was recorded along with any meteorological information. All this information was in a series of grouped 5 figured codes that were printed on teleprinters. This information needed to decoded and then plotted on the charts. Sometimes (as can be the case with HF) the signal boomed in and we got lots of information, at other times the interference rendered the information close to useless. In times of really bad reception the only weather information plotted onto the synoptic chart was that which was recorded on the ship. I have spent shifts constantly changing frequencies to try and get some useable information.

When flying operations were scheduled the office got really busy. The collection of the data through the HF continued but regular readings were taken at the top of the ship’s island (the bit that sticks above the flight deck on a carrier). These readings were taken every hour or half an hour depending on the conditions. This involved the poor sailor climbing four sets of ladders to get from the Met Office to the top of the island and take the readings. Back down again to the Met Office where the information was written up and with help of carbon paper copies were then delivered to the various offices and briefing rooms, all usually by the same sailor, up and down another 3 sets of ladders. During an 8 hour shift a climb of about 100 ladders (about 300 metres) could be expected. No wonder I was so skinny then!

The most vital meteorological information was the wind. The Melbourne needed over 21 knots across the deck for successful take offs and landings; stronger was better. Planes need air speed under their wings to fly. I once saw a Pilatus Porter (short take off plane) take off from Melbourne Airport on a very windy day. It taxied out onto the runway revved its engine and seemed to get airborne without too much forward motion and rise into the air just short of vertical. This was due to the airspeed being provided mostly by the wind. In the case of an aircraft carrier the more wind over the deck the more air speed a plane would have and the easier it would be to take off. The ship would turn into the wind so there was the ship’s speed and the wind combined to give a stronger wind over the deck. In times of no wind the ship had to achieve the 21 knots from only its engines. She was an old ship and at high speed she used to shake a lot, so much so that things would work their way off shelves. Additional airspeed would be added by the steam catapult. The planes would be shot off the front of the ship and in light wind conditions would dip below the level of the flight deck before achieving enough air speed to begin climbing.

Temperatures were also important as the higher the air temperature the less dense the air and the less lift the planes would get. We used to calculate the density altitude which gives an indication of how much lift a plane (or helicopter) would get. The higher the density altitude the less lift achieved. This meant that a plane would have to either use more engine force to launch or in some cases take a reduced weight payload or less fuel (reducing its range and endurance) just to get airborne. This was especially a problem in the tropics with relatively low pressures and high temperatures.

I must admit as a young man it was fantastic to be able to watch the Skyhawk jets and the Wessex and Sea King helicopters launch and land. However, my favourite was watching the Grumman Trackers with two radial engines driving the propellers, the blue flames came out of the exhaust and put on a great show during night launches. It was not without risk or accident. I saw two planes crash while on the Melbourne. One was a Skyhawk jet (888) which caught the arrestor wire, this slowed down the plane and then wire broke. With too much speed to stop and too little to re-launch the pilot ejected as his plane shot over the side.

That particular day, May 23rd 1979 went from bad to worse as a few hours later a Sea King helicopter was returning to the ship. I watched as it came close to the ship when I heard a bang and then the helicopter spun and went into the sea right next to the ship. Some fragments of rotor crashed onto the flight deck causing the flight deck crew to run for safety. I think it was a tail rotor failure but I cannot be sure. A weather-related incident occurred later that year when a Skyhawk 886 was being moved in rough seas. The ship gave a lurch and the plane and the brake man in the cockpit went over the side. Ironically the guy who went over the side changed his rating to become a Met Sailor as he thought it would be safer. Well, maybe not, one day when the wind was strong I was told to go to the front of the flight deck and measure the wind speed with a hand held anemometer. The anemometer maxed out at 60 knots which it was doing regularly when the wind picked up my 70 kg frame and tumbled me along the flight deck. I was rolling along uncontrollably when I was grabbed by a burly flight deck crewman. We then crawled to the island and safety. If it wasn’t for that guy (a photographic officer I think) I may have just blown over the side, this may not have been a great outcome in those seas. Upon returning to the met office I was told off for breaking the anemometer.

As the Melbourne increased in age it became harder and harder to keep it operational, the Navy looked around for another aircraft carrier and eventually agreed to buy HMS Invincible from the British. However, the Falklands war broke out and the Brits no longer wanted to sell her. With that the fleet air arm was wound back (including meteorology) and many of us Met sailors, who were now basically redundant, joined the Bureau of Meteorology. The Skyhawks were sold to NZ air force and the Trackers were put in a field near the Nowra airbase and left for many years. Some ended up in museums or used for parts, but most never flew again. Two were caught up in the bushfires near Nowra last year. The Navy kept the helicopters.

The Naval Meteorological Service is still going and supports naval operations by producing forecasts for the Navy around Australia and beyond our shores.

HMAS Melbourne began life as HMS Majestic. She was laid down as a “quick and dirty” carrier for WW2 but was not launched in time for war service. She was purchased by Australia in 1947 but was not commissioned until 1955. She served the RAN until 1982 when she was sold to a Chinese breaker’s yard. When she arrived in China she was “studied” by the Peoples Liberation Navy for nearly a decade before finally being broken up. It is believed that studying the Melbourne gave a shot in the arm to the PLN’s carrier program. The Chinese commissioned the Shandong a 55,000 ton carrier in 2019.