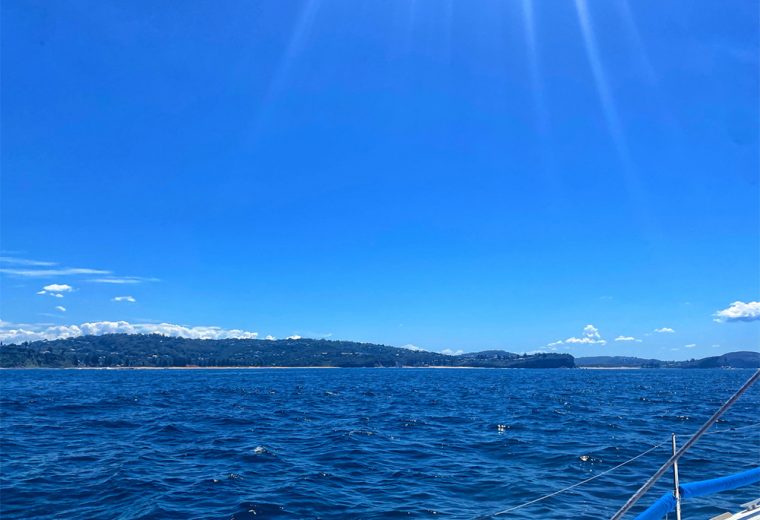 Sailing to Pittwater has been on my bucket list since 2018. I was on a Qantas flight from Brisbane to Sydney. My seat-mate pointed down at the water patches out of the window when the flight was approaching Sydney. “That’s Pittwater. An amazing place to sail to,” he said. From the brief conversations we had during the flight, I learned that he was an experienced skipper who had sailed all his life. I looked out of the window. Immediately what came in sight was the breathtaking panorama view of the Sydney coast, dotted with dozens of inlets and islands. Notwithstanding that Pittwater had always been one of my go-to places on weekends, it was rendered unrecognisable to me when seen from the sky. However, I’ve more than once wondered what it would be like to visit the scenic bay by boat when looking out over it from Middle Head Lookout in Ku-ring-gai Chase National Park. “Everyone should go for a sail if possible,” the sailor calmly uttered, a magic sentence. “Absolutely!” I replied spontaneously. It may be too much to call it an epiphany but the conversation must have triggered the unconscious awareness of my deep-seated dream to visit places that are least visited or less accessible to the crowd. Anyway, before the plane touched down, sailing to Pittwater one day had made it to my must-do list.

As I grew up in an inland city, learning to sail is no less unfamiliar to me than the idea of sailing to an island. As a result, I only started sailing at a local sailing club in October 2020, two years after the idea first hit me on that flight. I sailed almost every race for the entire summer season of 2020-2021. On top of that, I studied relevant sailing theories, learned all the sailing rules (2021-2024) by heart, finished the RYA navigation course, got my LROCP, and signed up for SSSC. So, after a season’s crewing in races, I have progressed from a novice who struggled even with basic sailing jargon to a confident amateur racing crew member. After missing several chances to sail to Pittwater for one reason or another, I finally got to visit the picturesque bay by boat.

Not a Test of My Sailing Skills… Yet

It was on a Thursday morning in February that I boarded the 40.7ft Beneteau to deliver her to Pittwater for the upcoming regatta and annual anti-foul service. It was to be my first voyage offshore but only one of many such deliveries for the skipper. The gist of the delivery is to get the boat to the destination as fast as possible. The weather on the radar looked fine  for a smooth delivery. With little chance of rolling and pitching of the boat during the voyage but the feeble breeze also meant motoring was faster than sailing for the delivery. So my first ocean navigation ended up to be a soft test of my susceptibility to the motion of sea rather than my sailing skills. The weather was beautiful and the sea was flat. Not surprisingly, I didn’t even have the slightest feeling of seasickness despite the fact that I hadn’t been out on the water for quite a while.

Sighting Australia from out at Sea

Steering the boat through Sydney Heads, where the Sydney to Hobart fleet turns right, we rounded North Head and turned left. Only then did the ocean passage properly begin. With no more ferries to give way to and no other vessels to keep clear of, the gaiety that’s peculiar to the ocean voyaging started to emerge. As we were cruising close to shore, I had the chance to appreciate the coastline in an overall perspective. The projecting headlands fringed with rocky ledges and curving beaches along the coast kept the spectacle going for the next three hours of our voyage.

The first long stretch of coast was Manly Beach; so named by Governor Phillip when he saw the manly behaviour of Spartan-like Iora boys on the beach. Shamefully, I was laughed at by a surf coach there for being ‘too weak’ after a blue bottle decided to tangle his tentacle around my ankle. The scar on my ankle is still a reminder of the trauma I got from the blue bottle and from not being ‘manly’.

As we glided further north, we passed Freshwater Beach, Curl-Curl Beach, Dee Why Beach, and Long Reef Beach. Had it not been for the headlands that divided them into different sizes, I would have wondered whether our boat had moved or not. All of them are immaculate crescent beaches of golden sand in the Northern Beaches area. Many a time I had watched from those beaches as sailboats crossed the horizon, admiring their freedom on the high sea. If someone was watching us from ashore, what would they be thinking at the time?

Next we came closer to the notorious Long Reef Point where a dangerous reef stretches out at least three quarters of a mile. Many shipwrecks and intentional scuttles happened in the area, including the infamous stranding of the paddle steamer Collaroy, which gave the suburb Collaroy its name. With no pressure of wining a race, nice weather and plenty of water, the skipper didn’t even bother to check the GPS. We simply steered our boat twice the safe distance away from the reef.

We were then heading towards the whale-shaped Bangalley Head. Our skipper who probably has sailed this water hundreds of times complained that he thought Bangalley Head was the farthest of the headlands to reach. “You can see it once you turn around Long Reef. You feel it’s close but it takes you ages to get there.” We laughed because we all knew the feeling. A watched kettle never boils. But to me, I was enjoying the moment, still expecting something exciting to add spice to this voyage, maybe a pod of dolphins to swim along with us or some sea birds to hang around the boat. But we didn’t spot any marine life as we picked our way through Narrabeen, Mona Vale, Bungan, Newport, Avalon Beach and finally into the vicinity of Palm beach.

Following the Tracks of History

After we turned around Bangalley Head we immediately glimpsed the Barrenjoey Lighthouse on the south side of the entrance of Broken Bay. Broken Bay was first recorded by Captain Cook. But when the First Fleet arrived at Botany Bay in 1788, they soon found Botany Bay provided no shelter for ships in heavy Easterly winds. Governor Phillip then took the excursion to Port Jackson first and later Broken Bay looking for eligible settlement. The harbour was concluded suitable to provide security for a thousand sails. It’s interesting to wonder if the Opera House would be at Broken Bay today if it was explored before Port Jackson in 1788.

When we entered the mouth of Broken Bay, the iconic Lion Island greeted us first. The island is equidistant from Barrenjoey Head on the south and Box Head (used to be called Hawks Head) to the north. Unfortunately, I learnt that the island is not open to public.

Turning left we changed our course to the south-east branch in the bay, known as Pittwater. Governor Phillip named the place Pittwater in honour of William Pitt the Younger, who became the youngest Prime Minister of Great Britain in 1783. The entrance to Pittwater shallows quickly due to the extension of shoal banks on both sides. As I was steering, I had to keep checking the depth gauge. Looking around, 200 years of history have made a great change to Pittwater. Both shores are lined with holiday houses and big mansions. I was conscious that I couldn’t possibly do justice to its beauty. Suffice it to say that the luxuriant greenery on hills, the serenity coming from the secluded quiet beaches, and the vitality coming from some sailboats practicing for the next day regatta in the bay can’t be described fully in words. I indulged myself in the beautiful view for another 45 minutes before we got to RPAYC and berthed the boat safely at the club.

It was a smooth delivery. Sporadically we could see a few boats disappearing over the horizon on our starboard side. I didn’t know if I would be bored if I had done a lot of ocean sailing. I was just hoping this voyage could be longer, or we could  hoist a headsail for a while. Of course, we didn’t explore other branches of the bay. The south-west arm where Pittwater Marine slipway is located, the north-west arm to Hawkesbury River and Brisbane Bay to the north were yet to be visited by me.