The dismasting of Gun Runner 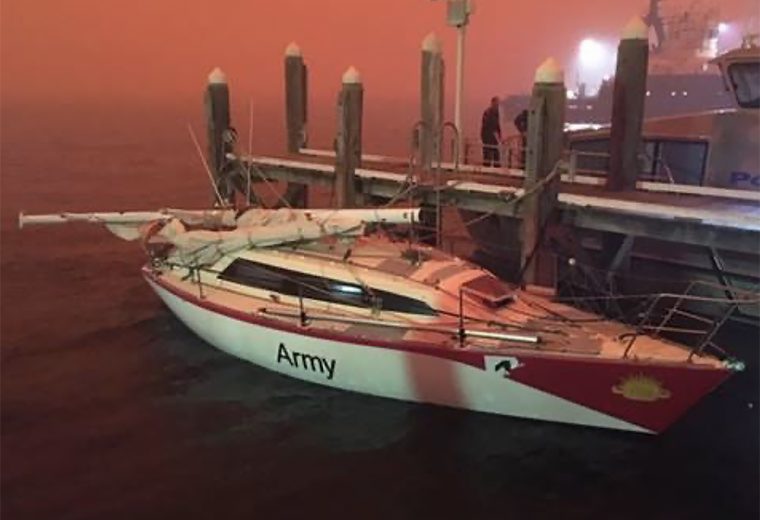 This account of the dismasting of the Army Sailing Club’s 30-foot Jarken Gun Runner on the return from the 2019 Sydney-Hobart is recounted by the skipper, Murray Stewart.

I tell the tale of the dismasting of Gun Runner so you may be better prepared if it happens to you. It was the first dismasting I had experienced but reading accounts of other dismastings, particularly in the book Crash Test Boat, gave me a level of knowledge from the hard-won experiences of others I could immediately apply. I would encourage anyone involved in an incident to give a detailed account to Afloat to help improve the knowledge and safety of all.

I left Hobart on 1st January with six new crew, all serving soldiers, most with operational experience. Three of us were day-skipper qualified and two others had previously done a Hobart-Sydney delivery run on Gun Runner.  The weather was favourable for departure with the only concern being a predicted 20-30 knots from the south as we approached Eden.

As we approached Eden over the night of 4th January to early on the 5th, the wind increased to a 40 knot southerly. A following also sea started to kick up. I instructed the off watch crew to stay fully clothed with life jackets on. With two reefs in the main sail and the number 3 jib we were travelling ok but rounding up a bit and the jib would occasionally back and flick to the other side of the forestay. The jib then came off the hook at the tack so a crew member and I went forward to drop it but it had jammed in the track and we couldn’t get it down. With some sail ties I secured the jib to the forestay which reduced the sail area considerably but it was still filling and popping a bit. We decided to seek shelter and as we were only 12nm from Eden, Chris the first mate gave me a course for Twofold Bay where we intended to shelter, despite having been enveloped in smoke in Bass Strait and seen the raging bushfires as we were coming up the coast.

At about 6nm off Eden I was at the helm with two other crew on deck when I heard a loud pinging sound. I looked up and saw the mast seeming to flex. I thought “that’s weird” and then the deck-stepped mast came down fast, straight back over the boat, directly at me. It hit meon the head and knocked me down and out. Thankfully our solid stainless steel tube pushpit took the brunt of it, the mast didn’t even hit the wheel. I came to a few seconds later with a crewman asking if I was alright. My head hurt a bit and I had a small cut but I was otherwise OK. I stood up and had a quick look around. At night, in a reasonably big following sea and strong wind, the mast down, half of it trailing over the back of the boat, lines everywhere and unsure of any other injuries it looked a mess so I called “all hands” and asked Chris to put in a Mayday with Marine Rescue Eden.

A quick check showed the deck crew were all uninjured so I took a better look around. The mast had come down intact straight back over the boat, it didn’t look bent or broken in anyway, nor had the base moved much from the step. I knew from Crash Test boat that the worst-case scenario was a mast broken off half way down, with the broken piece in the water but still tied to the boat with lines and shrouds, the jagged edge presenting a danger of holing the boat. Our boom was still attached and mostly on board along with a fair bit of the main. The navigation lights were working, as was the VHF radio, AIS and GPS, so we had all communications and navigation equipment. I had six fit, capable (albeit worried) crew up and ready to get to work. I assessed we were no way near worst case. We cancelled the Mayday and went to a Pan Pan (i.e. we have an incident but we are dealing with it). Marine Rescue Eden was grateful as they were dealing with two other Maydays at the time. In retrospect I should have gone to Pan Pan first.

While they performed admirably and didn’t say anything at the time I found out later some crew members thought we were in imminent danger of sinking and were fighting for our lives. My initial Mayday didn’t help. At first it may seem to you and your crew that a dismasting is a catastrophic life-threatening situation. So try to take time to assess the situation and reassure the crew it can be dealt with and you aren’t going to sink.

First job was to secure the mast. One person in the pit started securing the mast to the pushpit with lines while three crew went forward and started doing the same on the coach house. After securing the mast they got the boom and main back on board and secured. We were still 3nm offshore but it was around this time we were enveloped in smoke and ash with burnt leaves raining down on the boat from the south coast fires.  The smoke was so thick in patches it mad our eyes stream. It wasn’t a huge problem but it added to the drama.

We quickly ran out of lines and sail ties.  One of the problems with lines on most yachts is that they are long and inconvenient to lash things with so I had a crew member cut a spare line into 2m lengths which were much more convenient and useful.

At one point a crew member forward called for the hacksaw. It was brought up but I asked him what he wanted to cut, why he had to cut it, what would happen if he did and why couldn’t we just ease or let go something. After thinking it through it was decided nothing needed hacksawing.  I was paranoid about half cut lines and other debris that may foul the propeller when we started it so wanted to keep cutting to a minimum.

The crew on the foredeck got the jib tack and clew back on board but couldn’t bring any more in. Looking around I could see the rest of the sail under the boat illuminated by the still working mast light, now partially underwater. After consideration we decided we had to cut the jib halyard to free the head and get the whole sail from under the boat and back on board. That was the only line we cut.

After everything was secure I got the torch out and did a careful inspection of the water to see if there were any lines dangling. I then asked another crew member to do the same to double check. I started the engine then put it in gear and very carefully and slowly increased the revs to get under way. It was a real moment of truth. To my relief no unseen lines fouled the prop and we were slowly  on our way. It took over an hour of careful motoring to enter Twofold Bay. Thankfully we were blown or carried into the lee so the swell and wind abated considerably. I have read that when dismasted, the rolling action of the boat increases significantly. I did not notice that when we were working to secure the mast or later.

Chris mentioned the navigation lights I should be able to see as we approached Eden but through the smoke I couldn’t see anything. We were about 100m from Eden wharf when the first light appeared out of the smoke. There was a bit of messing around trying to find a berth as with 5m or so of mast hanging off the back of the boat we were a lot longer and more ungainly than normal. We found a temporary berth and around 5:30am finally put our heads down for a much-needed rest. On waking we found ourselves right in the middle of Eden’s bushfire emergency.

By 10am the Police informed us evacuation to Merimbula was the best option with buses being put on for the purpose. Eden’s population had assembled at their emergency area of the wharf and were preparing to leave. As we did not have enough time to prepare Gun Runner to evacuate by sea we got on the buses with the rest of the town and left Gun Runner alongside. Seeing the impact to the communities of the bush fires in the Merimbula evacuation centre certainly put our trivial sailing problem into context. We spent the night in the evacuation centre helping where we could. The road to Canberra opened the next morning so we evacuated three of the crew by road. We were unsure when we could return to Eden and I didn’t need a crew of seven to motor to Sydney.

The road to Eden reopened later that day so we went back to Gun Runner with four crew. The first job was to carefully undo all of the securing lines. We then inched the mast up the boat so it was sitting centrally between pushpit and pullpit. Cable ties were helpful to secure the shrouds to the lifelines. We lashed the mast on the coach house roof with its movement dampened by old car tyres. It took about six hours to prepare for our 200nm motor back to Sydney.

The weather was favourable so we left the next day. Motoring went well. The sea was slight, light winds and the only swell was from the south.  We started off with hourly checks of the lashings but they didn’t move at all. As things were going so well and all systems were working, we decided to motor through the night. We pulled in to refuel at Huskisson and arrived in Sydney early on the 9th January. We cleaned Gun Runner up and took her back to the mooring.

The summary of lessons I learned: