Gambling on the 18 Footers 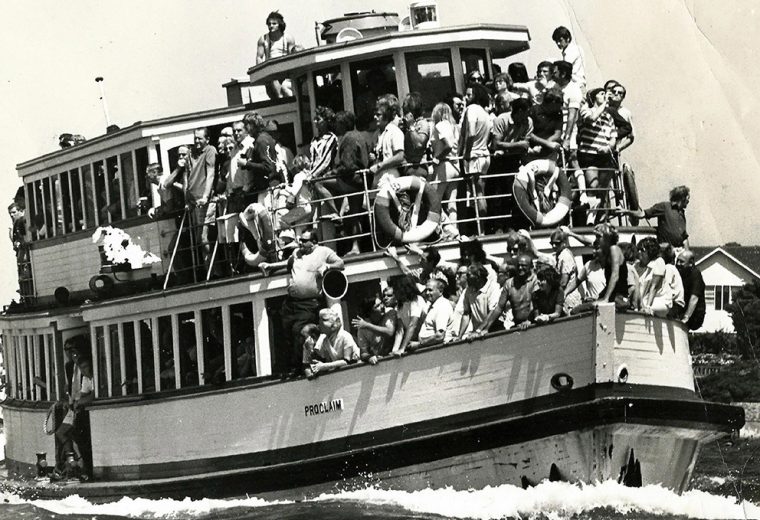 The nature of the boats and the men who have sailed them over the past 130 years always made 18 footer racing unique in the sailing/yachting world and one of the unique parts of the sport has been the gambling which has gone hand-in-hand with the sport since Mark Foy’s founding day on Sydney Harbour in 1892.

Gambling on the spectator ferries which follow the 18 footers goes back to the early 1900s, and beyond, but it was made illegal in 1906 when the government of the day introduced a ‘Gaming and Betting Act’.

Despite the act, bookies on the Sydney Flying Squadron ferries continued to ply-their-trade, even though there were occasional raids by the police.

Many spectators also watched the races from Bradleys Head, which led to the ferry patrons, who had paid to follow the races, calling it Scotchman’s Hill because they claimed those followers were too mean to buy a ticket.

There was plenty of gambling action on Bradley’ Head with bookmakers mingling among the crowd.  Unlike the bookies on the ferries, the Bradleys Head bookies also had plenty of warning if the police were seen by one of the punters.

In the early 1930s, attempts were made by the SFS to have the government legalise betting on the 18s but it fell on deaf ears.

According to Robin Elliott’s ‘Galloping Ghosts’ book, “Less than a month after the Squadron officials had met the government representative, police swooped on the ferry Kulgoa, which was following the race.  Plainclothes officers on board pointed out the offenders and twenty men were removed and taken into custody.

While the gambling remained illegal, spectators and crews alike in Sydney continued to engage in the practice which flourished both on the official ferry as well the Bradleys Head vantage point.

It’s been reported frequently that gambling went beyond the ferries and the crowds on Bradleys Head.  Some of the largest bets were made privately among the boat owners, and there were claims of race ‘fixing’ as well as rumours about skippers who accepted cash for allowing their boats to ‘run dead’.

Attendances were unprecedented with up to seven ferries being hired each Sunday to accommodate the crowds.

The entrepreneurial skills of the League’s first President, James J. Giltinan, were evident at the beginning of the 1936-37 season when each crew carried a jockey in the boat.  The move attracted non-sailing punters out onto the water and it was reported that “more than 4,000 people had watched the race.”

Smart marketing plus the novelty of being able to follow an exciting sport on a Sunday was obviously a winning formula but it also brought along an added bonus of attracting the horse racing fraternity who wanted to have a bet on a day, which had previously been unavailable to them.

The amazing success of the League is best summed up by League President Horwitz’s statement at the start of the 1938-39 season: “There can be no doubt that the modern type 18 footer appeals to the sporting instincts of every Australian which is evidenced by the fact that our patrons increase in numbers each season.  Two seasons ago we felt proud of being able to record 150,000 patrons for the season.  Last season (1937-38) we were just under the 200,000 mark.”

It’s been reported frequently that gambling went beyond the ferries and the crowds on Bradley’s Head.  Some of the largest bets were made privately among the boat owners, and there were claims of race ‘fixing’ as well as rumours about skippers who accepted cash for allowing their boats to ‘run dead’.

Back in the 1930s, the League’s weekly programme contained a warning that “betting and gambling are prohibited and any person so doing will be removed from the ferry and steps taken to prevent their future presence on the ferry.”

At the same time, the weekly programme was said to be a nautical version of a horse racing form book, containing previous results, likely wind conditions and “everything the punter needed to make a choice”.

As a young 18 footer supporter with a camera, I was aware of the ‘business’ being done on the spectator ferry back in the 1970s when a punter was able to get a bet on any number of alternatives.

Obviously, there was every opportunity for the punter to maintain an interest right through the race.

On Saturdays, the opportunity for the ferry patrons was even greater as there were horse races being staged in Sydney and Melbourne at the same time as the sailing race.

Of course, bookmakers also took the opportunity to cover the horse racing and the calls “Sydney, Melbourne or the boaties” was heard almost non-stop as the sailing race was in progress.

It always brought a smile to my face when I saw the bookies boards hanging defiantly alongside and under the official signage which warned “Gambling is Strictly Prohibited aboard this ferry.  By Order, Sydney Harbour Ferries”.

Along with the honest (even if officially illegal) gambling on the 18s came some unfortunate occurrences and practices.

It was reported that a bookmaker in the early 1950s couldn’t pay out on a successful wager and decided to jump overboard to solve the problem.

Worse were stories of attempts to influence the outcome of the racing by a few bookmakers who were prepared to pay agreeable skippers to ‘throw a race’ (lose deliberately).

On a lighter note, in the 1970s during a police ‘raid’, one bookmaker took the unusual action of hiding in the ‘ladies’ toilet on the ferry to avoid arrest.  It was a successful tactic.

Despite everything that had happened over the previous 75 years, when a spectator ferry was ‘raided’ by the police in the 70s, Neville Wran, the Premier of New South Wales from 1976-1986, openly claimed in a front-page newspaper story that gambling on the 18s was such a ‘tradition’ in Sydney that it was part of Sydney’s harbour heritage.

One journalist wrote in a newspaper feature: “This is a very civilised way to gamble.  How many TAB agencies (shops) offer sea breezes and a boat ride around the harbour.  The quality of the sailing and the hard-fought nature of the races make it a naturally exciting sport for spectators and participants alike.”