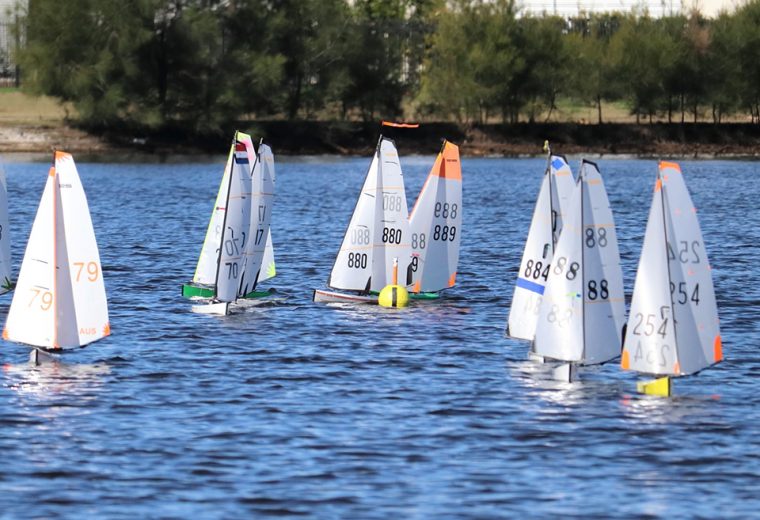 Paradise Radio Yacht Club hosted the 2020 Dragon Flite (DF 95) Queensland championships on behalf of the QRYA on the Gold Coast at Emerald Lakes on the 1st and 2nd of August.

After the 1st seeding race, boats were allocated to two heats, based on order of finishing place. After the B heat, the top four B heat boats then raced in the A heat to decide fleet race scores, before division of the whole fleet again into two heats for the next race. By the end of day 1, seven two heat races were sailed.

The weather for sailing on day one was perfect with blue skies and a cool southerly breeze that came in later in the morning. The wind ranged from 5 to 20 km/h average with gusts to 25 km/h. “A+” Rigs ruled the day with all boats able to be controlled in the gusty conditions that came during the middle of the day for a short period of time.

Racing on day one was extremely close for both heats. We saw Laurie Hinchcliff consistently performing with three first placings, Alan Walker with two and Mike Jefferys, Hank Beyer and Graham Cowling each picked up a first place. Only seconds separated the front bunch.

Sunday, day two dawned with another glorious fine and warm Gold Coast day and near flat water with little to no wind at the programmed start time of 10am. After a short delay an easterly breeze came in at 4 to 5 km/h and increased to 15 to 18 km/h necessitating the Race Officer to relocate the course to accommodate a new wind direction.

It was agreed the fleet of 19 remaining yachts would sail as one, this made the starts interesting with most boats choosing a starboard start. This produced ‘tight’ starts and some nervous skippers.

With the benefit of race results provided by scorer David Black,19 races were completed over the two days, with competitors able to drop their three worst performances. Many thanks David!

Prize giving followed shortly after the last race with PRYC Commodore Trent Jarratt thanking all local and interstate competitors, officials and volunteers for making the championship a great success.

PRYC received very positive comments for the way the event was organized and conducted over the two days. Everyone involved had a very enjoyable time, with great DF 95 racing. To quote Hank Beyer’s Facebook page comment: “A big thank you to PRYC for hosting a superb QLD DF 95 Championship. The Regatta was a huge success and well-orchestrated by PRO Trevor Fisher and the team of Volunteers”.

The QRYA and PRYC wish to especially thank Race officer Trevor Fisher for a job well done, Laurie Hinchcliff for organizing the Regatta and all the club volunteers who gave their time over the weekend.

Special thanks also to Trevor Nelson who took some 1,100 plus excellent photos during both days.