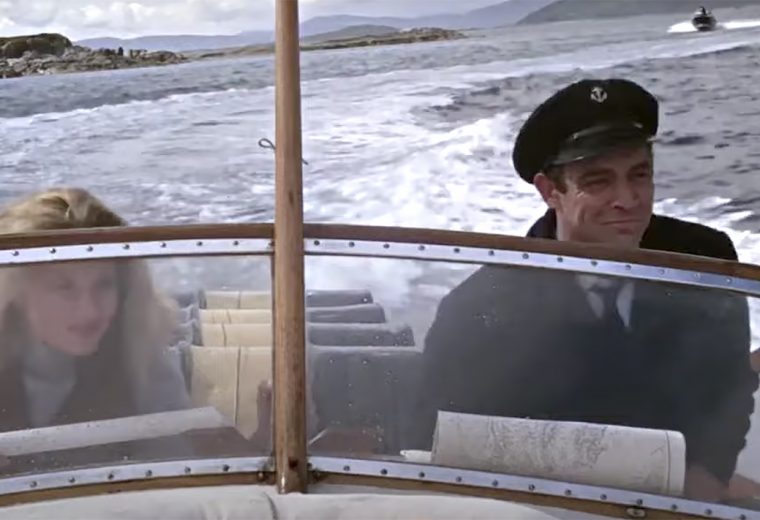 The latest James Bond movie ‘NO TIME TO DIE’ will be released in November 2020. There’s sure to be a boat in there somewhere so while we eagerly await the release here are some clips of 007 messing about in boats.

The World is Not Enough with Pierce Brosnan 1999:

THE WORLD IS NOT ENOUGH opens with the longest pre-credit sequence in 007 history lasting 14 minutes and includes Bond in the Q Boat in high speed pursuit down the Thames. The boat’s mid-air barrel roll was performed by stuntman Gary Powell using Vickers air mortars attached to the side of the boat — six cameras captured the stunt.

And don’t let him touch your Hovercraft either … from Die Another Day with Pierce Brosnan 2002:

Shot at Eelmoor Tank Driving Range in Aldershot, England, the DIE ANOTHER DAY hovercraft chase through the North Korean Demilitarised Zone was directed by 007 action unit legend Vic Armstrong. The hovercraft itself, a Griffon 2000TD, proved difficult to handle. “It’s like driving a bar of soap,” recalled Pierce Brosnan.

From Russia with Love with Sean Connery 1964:

“Ahoy Mr Bond”… This boat chase in FROM RUSSIA WITH LOVE was originally filmed on location in Turkey but director Terence Young felt the boats were moving too slow, so the sequence was reshot in Scotland. Can you tell?

The Spy Who Loved Me with Roger Moore 1977

This clip from THE SPY WHO LOVED ME (1977) features one of 007’s most iconic cars – the Lotus Esprit S1 affectionately known as “Wet Nellie”. For the underwater sequences, a miniature Lotus was guided through the clear waters of the Bahamas on ultra-thin wires.

Bond takes to the water for the thrilling LIVE AND LET DIE (1973) boat chase. The scene used 26 boats, 17 of which were destroyed. Screenwriter Tom Mankiewicz said: “I knew there was going to be a boat chase and until we started shooting, it just said, ‘The most terrific boat chase you’ve ever seen,’ because I never got around to writing it. That really happened as a result of going around the bayous and seeing the different stunts they could do.”

The Man With The Golden Gun with Roger Moore 1974

In this Bangkok boat scene Bond declines to pay a pushy young salesman 20,000 Baht instead helping him overboard while the annoying cop from Live and Let Die makes an appearance as an annoying tourist