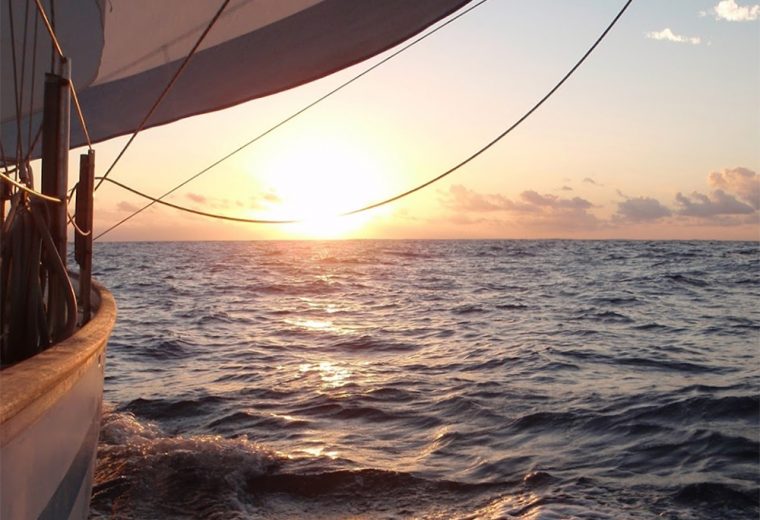 Noel* and Jackie Parry have spent many years sailing around the planet and inland waterways in a variety of sailboats and motorboats and they now offer the benefit of their experience in a series of courses via their SisterShip Training Emergency Preparedness Workshops.

Consider this: having the vessel maintained in pristine ocean going, tip top condition means diddley squat, if you are watching that fine craft sail over the horizon whilst treading water.

Well, I reckon I’d rather eat that can of worms than to ever have to face the real onboard emergency of a MOB. And that is regardless of my position in the drama, whether I’m in or out of the water a MOB situation will ruin your day something shockin’ or possibly the end of someone’s life, maybe yours.

SOLUTION: DON’T FALL OVER BOARD!

When you are in a boat, on the water underway, in any situation, your prime objective is to stay on the boat. It’s that simple. It is also, oh so simple, to find yourself bobbing in her wake.

Wear a harness and clip on. This includes when in the cockpit, shorthanded and your partner is off watch below. Jackie and I could not sleep until we had called out to the other, ‘Click, Click’. In other words, we wanted to hear the other verify that they are clipped onto the harness and onto the deck, ‘Click, Click’. Both carbines of the tether have to be locked on. The thought of waking, only to find an empty boat, inspires ideas and the practice of prevention. Despite all the scenarios of MOB practice and drills, the awful prospect of failure is always a possibility. When would you stop searching and how do you prevent a lifetime of, ‘if only I’d…’ or ‘what if we’d done…’ etc.

The boat at sea is your only universe. Hang on, for their sake!

It’s down to you and only you, to be involved with training, study, and practice techniques that suit your vessel. i.e. the vessel you are on at the time. It’s no use knowing how to turn about your 10 metre Halverson cruiser, if you are currently on Wild Oats XI surfing down waves at 25 knots.

We have all performed standard MOB drills, invariably in calm waters and with a crew of eight brimming hopefuls. Here’s how they normally go:

All of this establishes that the crew has the wit to realise the importance of raising the alarm, maintaining visual on the MOB, marking BOB’s position on the GPS, how to round the boat up in calm sheltered waters, check for lines in the water, and of course picking up BOB under motor. All good boat handling practice and a good start.

REALITY: The following are just some ideas to start you thinking of tactics you can employ, they are only a guide. You must develop and practice MOB procedures that suit you and your boat. And just to be really mean, try day and night retrievals, they are different, both have disadvantages/advantages. Good Luck!

Wind, south-easterly 20-25 kts true, on the port quarter, main and genoa to leeward, staysail to windward (the genoa is on a furler and the staysail is hanked on, both headsails are poled out, Jiffy reefing main has a single reef with the preventer on). The seas are building 2-3m on a 2m swell and are considered by the crew as normal trade wind sailing.

The two-handed crew are happy enough with the conditions, having left port three days ago, they are settled into a routine and enjoying six hour watches. All is well onboard.

Jane wakes on day four to find no sign of John, she has heard him only 30 mins ago as he muttered about the ‘the bloody stays’l needs to come in,’ and his footsteps overhead on his return to the cockpit, she had, thinking all’s well and gone back to sleep.

‘Where the bloody hell are you, John? Bet he’s on the dunny, bloody bugger better not be?’

JOHN ISN’T, AND HE IS NOT ON THE BOAT, WHAT DO YOU DO?

This is just one option. In our Emergency Preparedness manual we’ve detailed the other, more usual, options: DSC alert, Radio call, etc. During an emergency you should first try to communicate with others using radio, phones and signalling devices.

We’ve included the EPIRB option here as an idea depending on your equipment capability (e.g. severe weather has hampered other equipment). An EPIRB alerts authorities to a distress. If someone is overboard and hasn’t been seen, the likelihood of ever finding them again is extremely small. This is a distress situation.

Scenario names are fiction, not directly related to any specific incident or persons/boat and the boat handling is based on a long keel, 11 metre, heavy displacement boat.

Where do you start with your preparation?

We’ve done it for you, the bulk of the work that is. We’ve spent over a year creating two manuals, yes, there are two.

We are holding workshops around Australia in March and April. Both manuals are included with the training. If you can’t come along, pre-order your manuals here. Special deal for the launch. This is the first round and we are almost booked out!

Taking Readiness to a New Level

We’ve piloted the course to ensure we offer you the very best information, here’s what they say.

‘I must say I’m really enjoying and valuing working my way through the manual. I’m really appreciating the exercises as it really makes you think OK what would I do. Checking it against the scenario guide is either reassuring or helpful in terms of “oh yeah forgot about that or hadn’t thought of that.”’

‘This whole process will certainly not only be helpful in preparing SMSs but motivating to do so as well – mainly because it is not as daunting as it first seems. One SMS at a time – just like one step at a time. Well done.” M.G (on google business reviews).’

“This is FANTASTIC!” (feedback from participants while clutching the pre-prepared SMS)