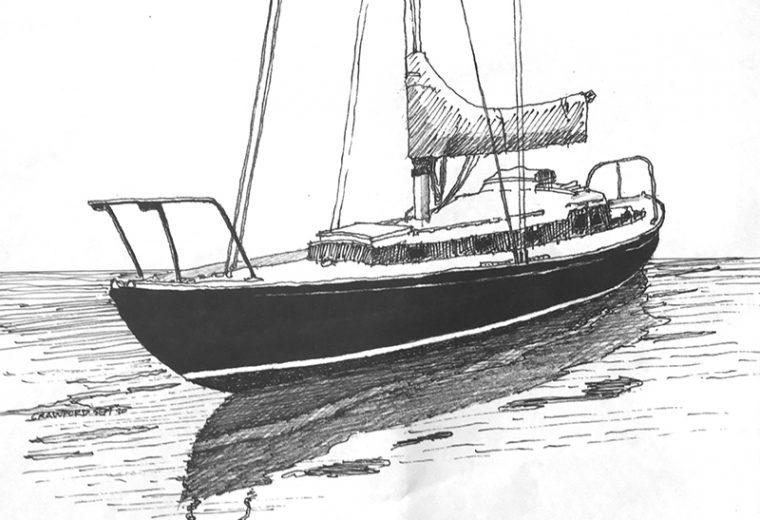 It was love at first sight when I first laid eyes on the lovely Celeste, swinging on her mooring in Snails Bay.  That was 25 years ago.  It wasn’t the passion of youth but was the deep affection she inspired in her middle aged, very proud new owner. The introduction had come from the doyen of classic sailing, Bill Gale. I was looking for a yacht about 30ft plus to race on Sydney Harbour. I had rung Bill to find the status of Claude Plowman’s pre-war Fife 6 metre, Sjo Ro. A boat I had known from the days it resided in Mosman. Unfortunately it had just been sold.  Bill then suggested Celeste and one look was all it took. It was love at first sight.

Celeste was designed by the Danish naval architect Knud Reimers. Reimers had a reputation for producing fast Metre Boats. Celeste has the lines of a 30 square metre yacht shortened to 34 ft. Her under-body shape is pure Metre Boat and her rig is that of a 30 square. Reimers was a believer in composite construction, which substituted a metal frame for the more normal timber thus saving weight while giving greater strength. In Celeste the frames are monel, a nickel alloy that never corrodes. The boat was built in Adelaide by Alan Jordan, the then Commodore at Royal South Australian Yacht Club. Alan, an engineer, built the yacht in his back garden in a shed constructed for the task. Celeste was launched in 1953 at Royal South Australian Yacht Club. Alan raced and cruised Celeste in South Australian waters for the next decade and every year she was towed back to the shed in which she was built and over winter her topsides were varnished and bottom antifouled ready for the next season.

The first year was low key racing, although we did end up with a podium finish. At season’s end the decision was made to refit Celeste. A lot of thought went into how she should look and it was about this time that one of the crew said, “this would be a great boat to take to Southport”. There is a world of difference between harbour racing and heading offshore for a 400-mile race, as I was about to find out.

The boat I bought had a masthead rig and lee helm.  Using the talent of Hood Sails, Sheerline Spars and Hugh Treharne the solution was 7/8 fractional rigs on a tapered spar which, going by old photos is very close to the original.  The helm now is as sweet as you could wish.  Minor repairs complete, the deck and coach house were encapsulated in 6 ounce glass and epoxy.  Mel Godfrey took on the upholstery and John Sturrock took charge of our instrumentation.  Our trial sail was one week before the race. We made it.  Our moment of glory on the way north was being in sight of Charisma at Cape Byron, however that moment was brief, time and tide did not favour us.

The race was sailed with what was then the new IMS post race constructed handicap. The race committee at the CYCA finally produced a result weeks after our return to Sydney. We did beat our two back of the fleet competitors Tactical Response and Firetell.

And so the year’s program evolved. We raced to Southport, we raced to Port Stephens and we raced to Coffs Harbour, and for a bit of a change we raced to Batemans Bay. On Sydney Harbour we raced with the Sydney Amateur’s Classic Division. For eighteen consecutive years Celeste was there from Opening Day to the Kelly Cup and was placed in one or other of the point score series or trophy series she contested.

Celeste was also the family boat cruising on Pittwater and Port Stephens. Port Stephens was a particular favourite with a rental at Little Bay and Broughton Island on the horizon.

After twenty-five years the heart is still willing and the body is starting to fade but the lovely ageless, Celeste swings on her mooring in Mosman Bay waiting for the next would-be owner to fall in love at first sight.