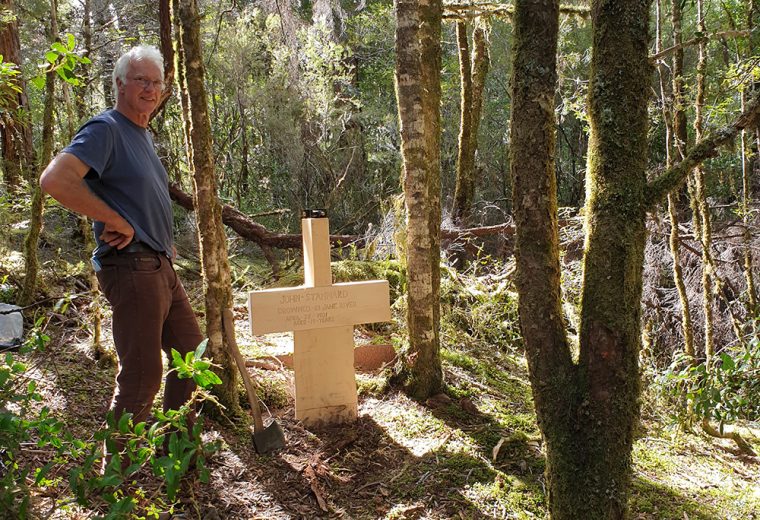 One hundred and 20 years ago, on April 29, 1901, 19-year-old John Stannard and his three mates arrived at their bush camp on the banks of the Jane River, a wild tributary of the mighty Franklin, deep in Tasmania’s rugged south-west wilderness.

Starting from what is now the Lyell Highway, the men had hacked their way through boggy, almost impenetrable bush country to reach their camp site at the headwaters of the Jane. Each of the men, who were planning to cut Huon Pine and pan for gold, could expect to be out in the wilderness for perhaps three months. They were well equipped with tinned tucker and tools: cross-cut saws and razor sharp axes carried on their backs in massive packs that weighed 80 pounds (36 kg).

On their first day of pining, Stannard and three of his mates were working about three miles below their camp at a place where the swift-flowing Jane was about 30 metres wide.

Two men were working the far side while Stannard and his offsider worked the near side. Stannard and his mate had each secured a Huon Pine log with a rope when one log was washed away. Stannard, who “could not swim a stroke” and was standing up to his head in the water, suddenly disappeared. Shouts of alarm rang across the river and two of the men dived in in an attempt to save him. They both became entangled and went under. A third man seized a four metre hooked pole and managed to haul the would-be rescuers out unharmed. Although “every effort was made to restore animation,” John Stannard could not be revived.

Stannard’s three mates undertook the terrible task of carrying his body three miles back to their camp and later, two of the men trekked back to Gormanston, the old mining town on the slopes of Mount Owen above Queenstown, to report the death to the police. Two constables were despatched and together with members of the Stannard family and several of their friends they made their way to the scene over some of the most fearful terrain in all of Tasmania. It was an 80 km journey that involved climbing the eastern slopes of the Frenchman’s Cap on their hands and knees and descending (backwards) the sheer cliffs of Terrible Hollow on a Jacob’s Ladder of horizontal scrub.

A King Billy Pine coffin was fashioned and Stannard was given a solemn Christian burial on the banks of the Jane. Huon Pine seedlings were planted at each corner of his grave and as a headboard they erected a sturdy Huon Pine cross carved with his name and the details of his death.  As a mark of respect for their mate, the men abandoned their camp site and never returned. Much later, in a callous act of desecration, the cross was stolen. Over the years, the grave site gradually became hidden beneath a mound of emerald moss.

John Stannard’s grave site may have been “lost” but it was by no means forgotten. Early this year, two young Tasmanian adventurers, Rob Parsons and Levi Triffit, took it upon themselves to walk into the upper reaches of the Jane, through the trackless south west forests in search of Stannard’s grave. They recorded their epic journey in a riveting video that left me in a state of exhaustion just watching it. They were on the point of giving up when Parsons’ metal probe sounded on one of the two fallen cross-cut saws that once stood over the grave. They fixed the precise location with a hand-held GPS plotter and retraced their steps through the wilderness. 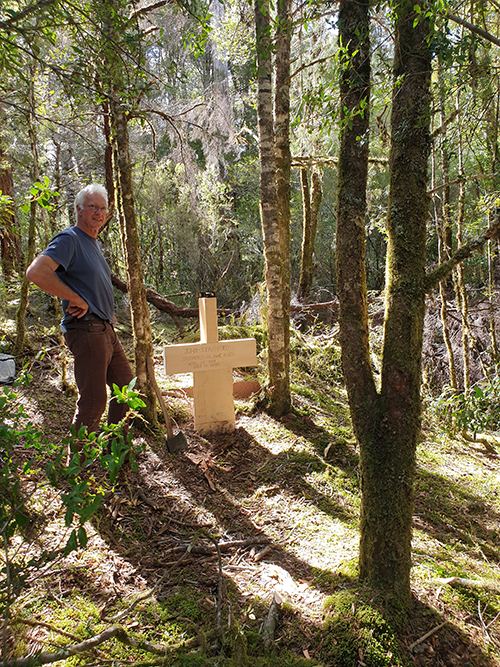 The story might have ended there had it not been for the skill and tenacity of Ronnie Morrison, the famous axeman and Huon Piner who remains a legendary bushman in Tasmania. Ronnie made an identical Huon Pine cross and carved this inscription on its face:

He erected it at the grave site, exactly as it was 120 years ago.

Epitaph: Although John Stannard was not a direct relation of mine, I do feel a strong sense of kinship with the unfortunate young piner through our shared family name. I greatly admire his spirit of adventure in trekking so boldly out into the wilderness with his mates but I very much doubt that I would have had the courage, let alone the tenacity, to go with him.  My thanks go to Ronnie Morrison for the selfless role he played in what he regards as “a great adventure.”