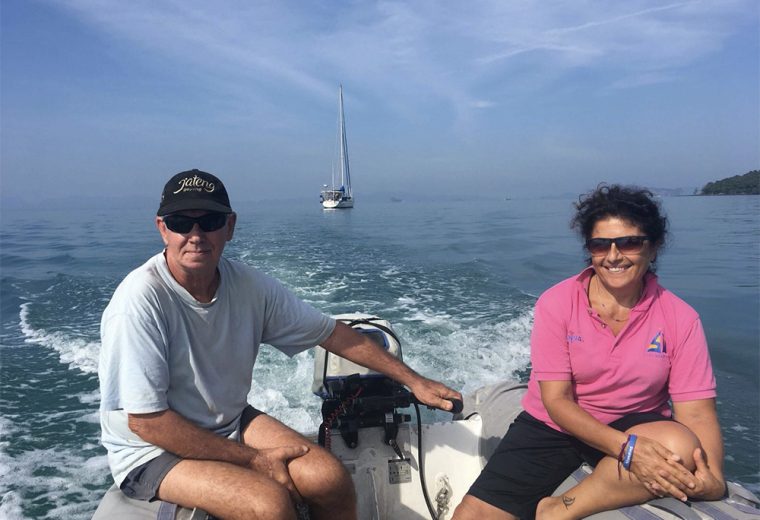 Main photo: The author and the skipper with Tehani-Li, their home in the back ground

Dash for home in times of Covid-19 by Karel Dimitri

I looked at him aghast: “There is no way, and no need for us to sail the whole Pacific Ocean in one stretch. That would be about 2 months at sea! A tad crazy, don’t you think?” I was responding with obvious disbelief, to my skipper, who, foreseeing that the world pandemic was not disappearing as quickly as we hoped, started to plan our return to home soil.

We have been living on our 16-metre yacht, Tehani-Li and sailing the seven seas for the past 12 years. It was our home.

We were anchored in Curaçao, an island in the middle of the Caribbean Sea. All of the neighbouring countries were closed to newcomers, and like most of our fellow cruisers we were “stuck”, unable to go anywhere.

But, if we could enter the Pacific Ocean by way of the Panama Canal, we could sail home. Unfortunately, every island nation in the South Pacific was closed at the time. Hence, the idea of a non-stop voyage. Fortunately though, we have been to most of those islands before. It was therefore “somewhat acceptable” to sail past those small jewels.

There was the small hurdle of transiting the said canal.

To my secret joy, (let’s face it: who wants to sail non-stop for 8,000 nautical miles about 14,800km), the canal had closed down for a few weeks to small crafts. Great, I thought, decision made, we are staying put.

That feeling of joy and relief was short lived. The Canal Authorities, recognising the fact that Australians and New Zealand sailors wanted to sail home, re-opened it some three weeks later.

And with that, slowly but surely, The Captain started hammering the fact that we would be better in Australia.

We are now at the beginning of May, and have been in Curaçao since mid-March. A few days earlier, the government of our small host island started easing restrictions. With the newfound freedom, flights resumed cautiously and it was mentioned that if we could fly home, to seriously consider it, as visa extensions would become difficult and costly. We didn’t want to leave the boat, our home, and fly out. Who knows when and even if we could get back to it?

And that was the “last excuse” my skipper needed to convince me that our decision was the right one.

A five day sail and we were in Panama. A 14-day quarantine on anchor was imposed on arrival. Not a problem as we were prepared. But should we need anything: food, fuel, SIM cards, the marina staff were more than happy to help. In fact, they zoomed along in their small dinghy checking on all the anchored boats on a daily basis.

Once allowed in the marina, preparations were in full swing: a few repairs, checks and tons of food purchases. And excitedly, for the first time in a long time, we were able to join in the social life and meet fellow cruisers.

For six weeks we prepared and repaired. Although I was working towards an eventual departure, deep down I hoped for the opposite. And I was full of thoughts and ideas on how to avoid this epic journey. Wouldn’t it be great if I didn’t have to submit myself to this very long sail? No night watches, no unpredictable weather or storms, no interrupted sleeps. No worries! Maybe I could sell the boat? Maybe someone here in Panama would buy it? I did, in fact, put the yacht on a few internet sites and hoped against hope that someone somewhere would be interested, and would be able to fly in, and … who am I kidding?

Slowly things started to come together and the big day loomed. The transit was booked, the boat full to the brim with food and goodies, which we hoped would sustain us for the long crossing ahead. The hour gets confirmed; our canal advisor will be dropped on board at 0500 the following morning to commence the transit. It would take a full day.

We have a small gathering on our boat to say our goodbyes. The moment is bittersweet! We’ve made friends during our short stay at Shelter Bay Marina, and we are sad, as always, to say goodbye.

The Transit goes smoothly and late that afternoon we are in the Pacific. No turning back now.

The Central American coast recedes behind us, and we settle in. This is going to be a long ride. I occupy myself by writing about our experience, I read books, we play games and we make bets on how many days it will take to reach Australian shores

Then, on day 32, the thing I dreaded the most, happens. One of our lower shrouds (wires that hold the mast up and there are several on both sides) breaks. My normally cool, calm and collected Captain comes up as soon as he hears the bang and my anguished cries. He stands there and looks up at the broken wire, and I could almost see and hear the cogs turning in his brain; but the worried look in his eyes is what will haunt me for the rest of the passage.

The closest land, American Samoa, is 1,100 nautical miles away (over 2,000km away). But like most countries, it was closed. Would we be able to get in? Would we find the part we need to repair? We do not have enough fuel to cover that distance; we would have to sail at an upwind angle for 8 to 10 days. That would put more strain on the rig, is that even possible? All those thoughts and a thousand more were popping up randomly. 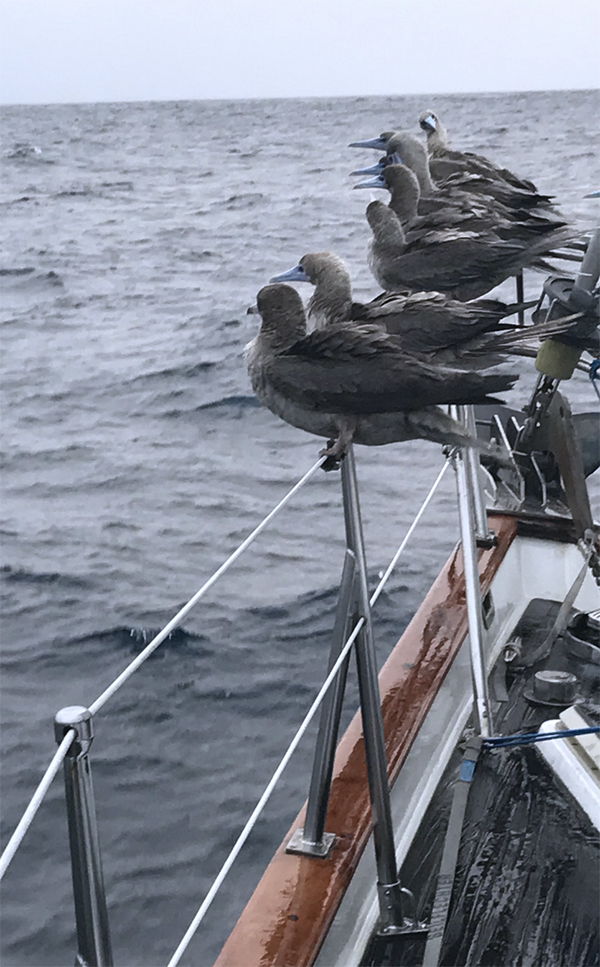 But let us worry about all of that later. At the moment we need to act now to stabilise the flexing mast before it breaks and leaves us in even more of a pickle. Eventually, the skipper devises a plan and I hoist him up, three times that first day. Then, thinking of a better way the following morning, he goes back up the 22-metre stick, twice. Five times in two days with bruises on the inside of both his arms to prove it. The sea was animated, and although he was in a bosun’s chair and secure, he struggled to keep hold of the mast in order to secure the shroud. But to our relief, he managed, the mast looked more solid. It would work.

Checking it almost constantly over the following days, we realised it is solid enough to continue to Australia. No need to divert our route for that emergency stop.

And 27 days later we made it. The Port of Bundaberg loomed. The mast stayed up; it was solid and held even in that horrible night of 30 knots of head winds, we encountered around New Caledonia.

Unfortunately, neither of us won our bets of how many days it would take. But the joy and elation of reaching the Australian mainland after 59 days at sea, was a big win for skipper and crew!

And now back on home soil, I am grateful that in the end, I followed my skipper’s advice.