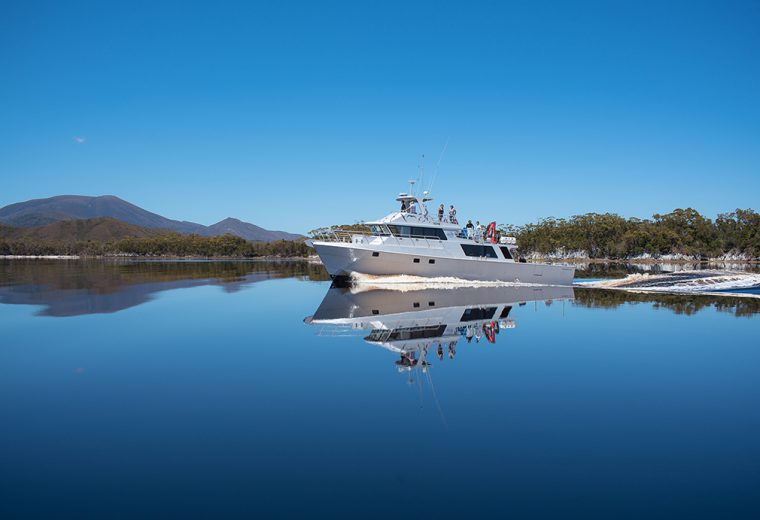 “Nuh!” said the skipper holding a crayfish aloft. “It’s too small.” He tossed it back into the kelp beds and continued his search. A short time later he swam back to the rocky shore of Stephens Beach where we waited and pulled two big flapping crays out of his sugar bag.

Plenty for a BBQ lunch. An hour later they were simply cooked with butter, sweet chilli, olive oil and ginger, served up with some crusty bread, a tangy salad and a bottle of Tasmanian Pinot Gris. Welcome to Port Davey.

Tasmania is a remote and beautiful part of our blue pearl planet. Head to the south west corner and you’re in perhaps the most isolated area of our island state, the Southwest National Park. It’s 600,000 hectares of wild, challenging country full of a rich and diverse selection of flora and fauna and, typical of Australia, there are some weird and wonderful creatures unique to this tiny pocket.

Such as the Sea Pen, an animal that acts like a plant, waving fronds around to catch passing morsels. Normally found in dark still depths of up to 2,000m or more, it ekes out a fragile existence in Port Davey due to the dark tannin rich layer of water that makes up the first few metres of the waterways. Underneath the top layer the water is clear and dark and mimics the deep sea conditions that are ideal for a range of rarely seen animals and plants. It’s the only place in the world it occurs. The only place.

Port Davey and Bathurst Harbour are formed by a drowned river system three times the size of Sydney Harbour. It makes a fine sheltered anchorage for boats traversing the wild south coast of Tasmania and gives respite to many of the intrepid sailors and tough fishermen who range the coastline in search of fish, abalone and crayfish.

At the mouth of the vast waterway sits the aptly named Breaksea Islands. Once around the Breakseas you’re safe from the fury of the Southern Ocean.

There are no roads to Port Davey, but there are several ways to access the wild beauty of this World Heritage area: walk, fly or sail. Or a combination of these.

Walking – the 85 kilometre South Coast Track will take six to eight days carrying all your gear.

To make the trek easier you can fly and then walk. Par Avion airlines based at Cambridge Airport does the 125kms from Hobart to Melaleuca in around an hour in their twin-engine Britten Norman Islander. A 10-seater plane designed to carry heavy loads and take off and land in short distances on remote airfields.

For the absolute best experience we chose to fly and meet up with the Odalisque, a 20m custom built boat specifically designed for experiencing Port Davey and the Southern Ocean. Built in Western Australia she is a sturdy, safe and comfortable vessel with hot showers and soft beds. Operated by Tasmanian Boat Charters she spends the months of January to May based in Port Davey.

Owner/Skipper of Tasmanian Boat Charters, Pieter van der Woude is the man behind the vision. He loves the area and likes nothing better than to be able to share it. Pieter is quiet and softly spoken and has lived most of his life in the waters of Tasmania and the Southern Ocean. Working for 12 years as a policeman followed by 25 years as an abalone fisherman he has developed a deep respect for the environment and the creatures that often depend on our decisions and behaviour for their survival.

During the off season, Pieter has worked for the Australian Antarctic Division where his boating skills are used to unload and load the RV Aurora during re-supply operations of the various Antarctic bases and Southern Ocean Islands, including Macquarie Island. His experience and passion for the waters and marine life has made him the perfect skipper for guests wanting to explore the remote Tasmanian Southwest and Southern Ocean waters.

The weather is always a big part of any boating trip. Our flight to Port Davey with Par Avion was delayed due to the weather but once there Hughie smiled upon us. The Southern Ocean took a nap for a couple of days. The sun beamed down and a gentle swell kissed the rocks of the Breaksea Islands.

Shortly after our arrival on Odalisque we jumped into Pieter’s 15ft tough-as-nails tinnie and headed to the Breakseas. Made predominantly of sharp and angular quartz, this jagged two kilometre chain of three islands has been carved by the waves with grottoes, tiny bays and rocks sculpted by wind and sea into spikey gargoyles.

Pieter had never seen it so calm and deftly manoeuvred the tinnie between the narrow kelp-fringed openings of never before explored caves. The tranquillity was broken only by the gentle hiss of the water over the kelp and the walls were dappled in colours reminiscent of a painters well-used pallet board. Nature’s cathedral and we were privileged to be there.

As we explored further afield we had the benefit of a fascinating commentary from guide Peter ‘WikiPete’ Marmion. A former school principal with a love of the wild, Pete has trekked all over Tasmania and especially the South West. His nickname was bestowed upon him by some grateful guests in awe of his encyclopaedic knowledge of the geography, anthropology, history, flora and fauna.

He can spot a rare orange bellied parrot at 100m and knows the names of all the plants and animals.

The history of Port Davey is a speciality of Pete’s. The area has been inhabited for 35,000 years, The last indigenous tribe were the Needwonnee. A hardy and gentle people who managed to thrive in this harsh landscape. They built domed huts which were warm and waterproof and located next to fresh water with protection from the Roaring 40s.

Proof of their existence and lifestyle are the largest intact middens in Australia. Up to three metres high they are a physical display of their diet. They read like a fine dining menu containing shells of abalone and crayfish and bones of seabirds and seals.

Pete’s keen eye was able to spot the Needwonnee’s tools dotted about the middens. At first glance they look like an ordinary piece of quartz but hold it in your hand and a transformation takes place. They fit neatly and comfortably in the crook of your forefinger and thumb with a still sharp edge facing outwards. Simple, effective, awe-inspiring but tinged with sadness at the loss of the people who held these tools many years ago.

More recent history has seen a collection of resourceful and colourful characters, whalers and loggers, fishermen and tin miners.

Denison ‘Deny’ King was one such character. A tin miner who slogged away at making a living and raising a family at the same time, he became a keen protector of the area and its wildlife. He was instrumental in preserving the habitat of the orange-bellied parrot. He also built the airstrip at Melaleuca. Deny died in 1991.

Deny served in New Guinea in World War II and it was during the war that he met Margaret Cadell, the nurse he would later woo by letter in a courtship as touching as it was unconventional. Margaret was from a well-to-do family and Deny was a rough but honest and hard working man.

After pursuing a four-year courtship with Margaret by correspondence, courtesy of passing fishing boats, Deny brought Margaret from the big city lights to the wilderness of Port Davey and proposed to her on top of an un-named hill above what would later come to be the site of their cabin.

Guide WikiPete Marmion tells the tale of the marriage proposal:

“The story goes that after Deny nervously asked Margaret to marry him she took her time to reply, gazing around at the solitude and beauty before finally turning to Deny with a smile and replying, ‘I spec’ so.’

“There’s a request with the Nomenclature Board of Tasmania to have the hill named ‘Spec So Hill’. I hope it’s successful.”

Back on board Odalisque

It’s a hard act to follow but when we returned to Odalisque chef Kerryn Oates had prepared a magnificent charcuterie board and was well into the dinner preparation. Tasmanian Boat Charters has a guest chef ‘borrowed’ from a Hobart restaurant for each voyage. The Chef’s brief is to provide the best modern Tasmanian produce, paired with fine Tasmanian wines.

Kerryn’s calm and capable manner in the galley is what made her well suited to the demands of life on Australia’s Antarctic bases. She spent 18 months in the Antarctic experiencing both summer and winter at Casey and Davis while providing food and laughter to the workers and scientists.

Pieter van der Woude along with his skilful guide and chef offer an experience like no other. Odalisque has a maximum of 10 guests with most trips comprising three couples. The Tasmanian flora and fauna set against a backdrop of scenic wilderness will make your heart sing.

A calm night at anchor aboard Odalisque is a treat. Good company and a glass of wine under a canopy of stars, followed by hot showers and a comfy bed.

Everyone involved with Tasmanian Boat Charters shows deep respect for nature and the ecosystems of Port Davey. They are all enthusiastic and entertaining and love nothing better than being able to share their world.

And do you want to know one of the best things … switch off and relax because there is no mobile phone reception. Clyde Clayton, the fisherman who brought the mail and stores to the little tin-mining outpost at Melaleuca sums it up – “There is no time in Port Davey, only seasons.”

Getting to Port Davey 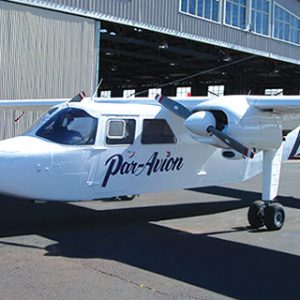 Guide: Peter ‘WikiPete’ Marmion. Encyclopaedic knowledge of the area imparted in a fun and contagiously enthusiastic manner. Has an ability to survive for long periods without the internet. 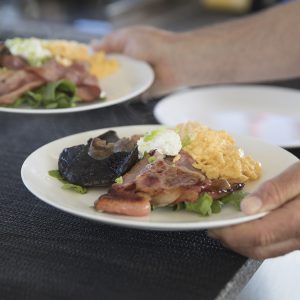 Even here along the remote southern ocean coastline plastics wash up and litter the shoreline. It’s a given that anyone who makes the trek to SW Tasmania has a strong regard for the environment and as such bottles, ropes and other debris are collected during hikes along the beach and deposited in a discreet pile among bushes on the track. Volunteers come in twice a year and remove the rubbish.

The writer was a guest of Tasmanian Boat Charters