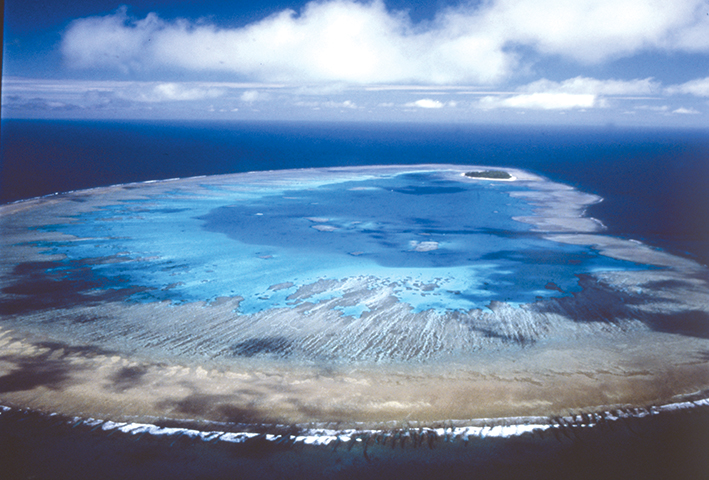 It’s about this time of year, that many boat owners dream of escaping the cold winter chills by heading north. This year QLD is closed but we can plan for 2021. John Boyce reports.

From June or July along the east coast of Australia, there is a steady trickle of vessels following in Captain Cook’s wake, most crewed by a couple intent on their own voyage of discovery. Their destination is The Great Barrier Reef which is the largest, most complex and biologically diverse coral reef system in the world, no wonder it is Australia’s most cherished natural possession.

At around 2,300kms stretching from Papua New Guinea to Bundaberg, it is almost 10 times the size of the Belize Barrier Reef and is the only living structure on Earth that can be seen from the moon – astronauts describe it as “a thin white line in the blue ocean”.

The width of the Reef depends upon the width of the Australian continental shelf, it is closest to the coast in the north (25kms) and further away in the south (250kms). It is not one continuous reef, but a system of more than 2,900 individual reefs which collectively is known as The Great Barrier Reef.

The underlying basement of the Reef is between 18 million years old in the north and two million years in the south. The living reefs we see today have all grown since the last Ice Age 8,000 years ago.

There are no atolls within the Great Barrier Reef but there are about 300 coral cays, all of which are less than about 6,000 years old. The greatest growth seems to be in the shallower areas where the corals strive upward towards the sun, just like the trees in a forest. As the sea level gradually rose, the corals kept pace growing upward and upward so that now many reefs appear like a giant plateau rising from the sea floor, far below.

These structures can be likened to giant saucers of coral where the perimeter forms a breakwater for the body of water within, so there are safe anchorages to be enjoyed far from land.

Lady Musgrave Island (main photo above) located about 50nm north of Bundaberg, sits atop an extensive coral reef lagoon system where safe anchorage can be found so it is generally the first experience those travelling north have of The Great Barrier Reef.

When I started my maritime career, before the age of satellite navigation, I used to sail through the night timing my arrival to be an hour or so before dawn so that I could pick up the beam from the Lady Musgrave lighthouse. A later arrival would make it almost impossible to see the low island when looking east into the rising sun.

I was always mindful of the story my uncle told of the time he crewed on a boat that sailed right onto the Lady Elliott Island Reef. There were some pretty influential Queensland politicians aboard so the newspapers had a field day.

These days, GPS is so accurate that there is no excuse for such mistakes, you can even download an app onto your mobile phone and see your position and boat speed displayed in real time.

Another safe anchorage is Hardy Lagoon about 40nm north east of Hamilton Island.

This image is an aerial view of Hardy Lagoon taken from above the clouds, where the perimeter of the Reef is silhouetted by the deep blue channel surrounding it. The lighter area inside (the “bowl” of the Reef), is mostly less than 10m deep, so the whole is like a giant plateau about 50 football stadiums in size.

There are three entrance channels marked, the two on the right are for tender access only while the channel on the left is suitable for larger craft. Entry to the lagoon is only possible at slack tide, it’s a bit of a challenge the first time you enter the lagoon but well worth the effort.

Being inside the lagoon is like floating within a giant bowl of coral, at high tide the coral is completely submerged while at low tide the perimeter of the coral lagoon emerges from the sea and prevents its escape. The difference between the water level inside and outside the lagoon can be as much as two metres, so the narrow entrance channel allows water to escape with such force that it becomes a horizontal waterfall.

The channel becomes a huge natural ‘water slide’ where snorkellers are catapulted into the air by the pressure waves that build up as the tide falls – Great Fun!

At 348,000sqm, the Great Barrier Reef Marine Park is the largest World Heritage Area and the biggest tropical marine reserve. Let’s put that in perspective, it is roughly the same size as Japan or approximately half the size of Texas.

Included in the Marine Park are the subsoil beneath the seabed extending to a depth of 1,000 metres, and the air space above extending to a height of 915 metres BUT, there are some parts of the Marine Park that are not part of the World Heritage Area, including Queensland internal waters, Queensland Islands, islands of other tenure and some areas adjacent to the coast.

All activities within its border are managed by The Great Barrier Reef Marine Park Authority (GBRMPA).

I recollect back in the late 1980s while we were conducting a week long live-aboard expedition cruise, a Marine Parks launch entered the bay and came over to greet us. Seeing the name of our yacht Sydney Sundancer with port of registry Sydney displayed on the stern, it was a natural mistake to enquire, “Are you having a great holiday up here so far from home?”

“We’re chartering and have a family from the UK aboard,” my effervescent wife Lynne replied.

“You have to have a permit to charter!” the Marine Parks officer said.

“First I’ve heard of that, Mate,” I mustered a deep gruff voice with righteous indignation.

At the same time the father said quietly to Lynne, “Wrong answer.”

“Don’t worry,” the Marine Parks officer countered. “It’s all new, the boss has said we need to understand what you guys are doing within the Marine Park so here is an application form. You tell us what you’re doing and we will give you a permit to do it so that we don’t encroach on your business.

I accepted the form and said I’d post it next time I was ashore.

When we commenced operations, there were very few live-aboard charter operators, we were the real explorers – we shared our knowledge with each other so that we could provide the best experience for our guests. We didn’t think of each other as competitors, we were “partners in industry” dedicated to providing an experience not available anywhere else in the world.

Over the next two decades, most of the other originals fell by the wayside because the dedication required to provide a live aboard experience is total. We were away from land for long periods and our world was limited to a short distance around our yacht’s current location. Communication was limited to the two-way radio. Television reception was impossible, and listening to the radio was out of the question because our guests wanted to get away from the “woes of the world”!

Having detailed our activities and the locations we visited, the permit issued by GBRMPA was simple and to the point.

We were granted unlimited access to “all zones and locations except special management areas and preservation zones”!

The permit document was about the size of a motor vehicle drivers license issued 30 years ago (A6) that could be folded and kept in your wallet. Today our Marine Parks permit is a 19-page legal document identifying exactly what we can do, where we can go and how often. We have jealously guarded our original permissions so received the following comment when inspected by a Marine Parks officer recently

“You guys have a pretty unusual permit, you do a lot of stuff and go a lot of places!”

Over the last three decades we have snorkelled and dived most of the highlights between Lizard Island and Lady Elliott Island so it is with much concern that we received news that experts from GBRMPA and researchers from the Australian Institute of Marine Science (AIMS) confirmed mass coral bleaching for the second year in a row after spending six hours flying over the Reef between Townsville and Cairns.

“How this event unfolds will depend very much on local weather conditions over the next few weeks.” GBRMPA Director of Reef Recovery, Dr David Wachenfeld said.

Importantly, not all bleached coral will die. As we saw last year bleaching and mortality can be highly variable across the Marine Park. Dr Neal Cantin from AIMS said the recurrence of widespread coral bleaching in back-to-back summers indicated there was not enough time between last year’s extreme heat event for the corals to fully recover.

“Anyone out on the water can help protect the Reef by following the zoning rules and responsible reef practices and leaving plant-eating fish to help control seaweed and enable coral larvae to settle and create new colonies,” Dr Wachenfeld added.

This article was first published in Afloat magazine in April 2017.

*John Boyce is a Master Mariner who has been conducting cruises for three decades aboard Australia’s most awarded charter boat Sydney Sundancer. www.whitsundayluxurysailing.com.au
www.luxurysydneyharbourcruises.com.au