Sailing in Maine – a cruiser’s paradise 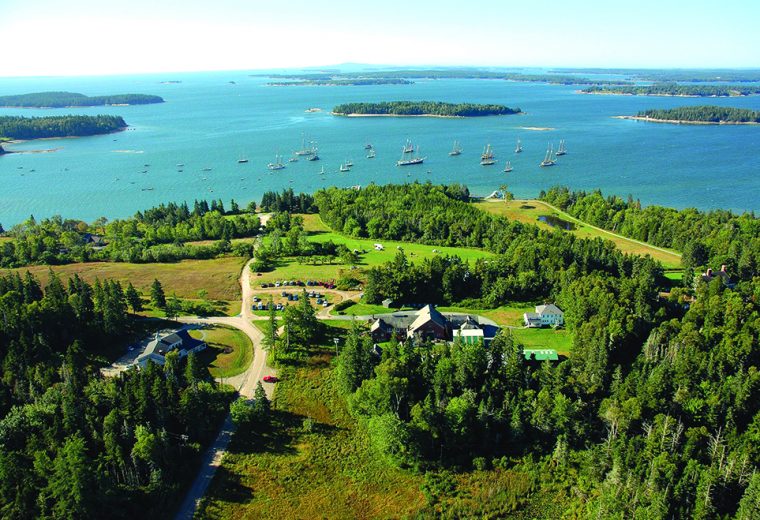 Main photo: Wooden Boat School campus setting at Brooklyn with myriad of islands on this Atlantic seaboard in the far north-east of the United States of America.

Few places in the world offer the cruising sailor the diversity of on-water experiences combined with hundreds of picturesque villages for on-land exploration as does the rocky coast of Maine, writes Craig Ligibel. 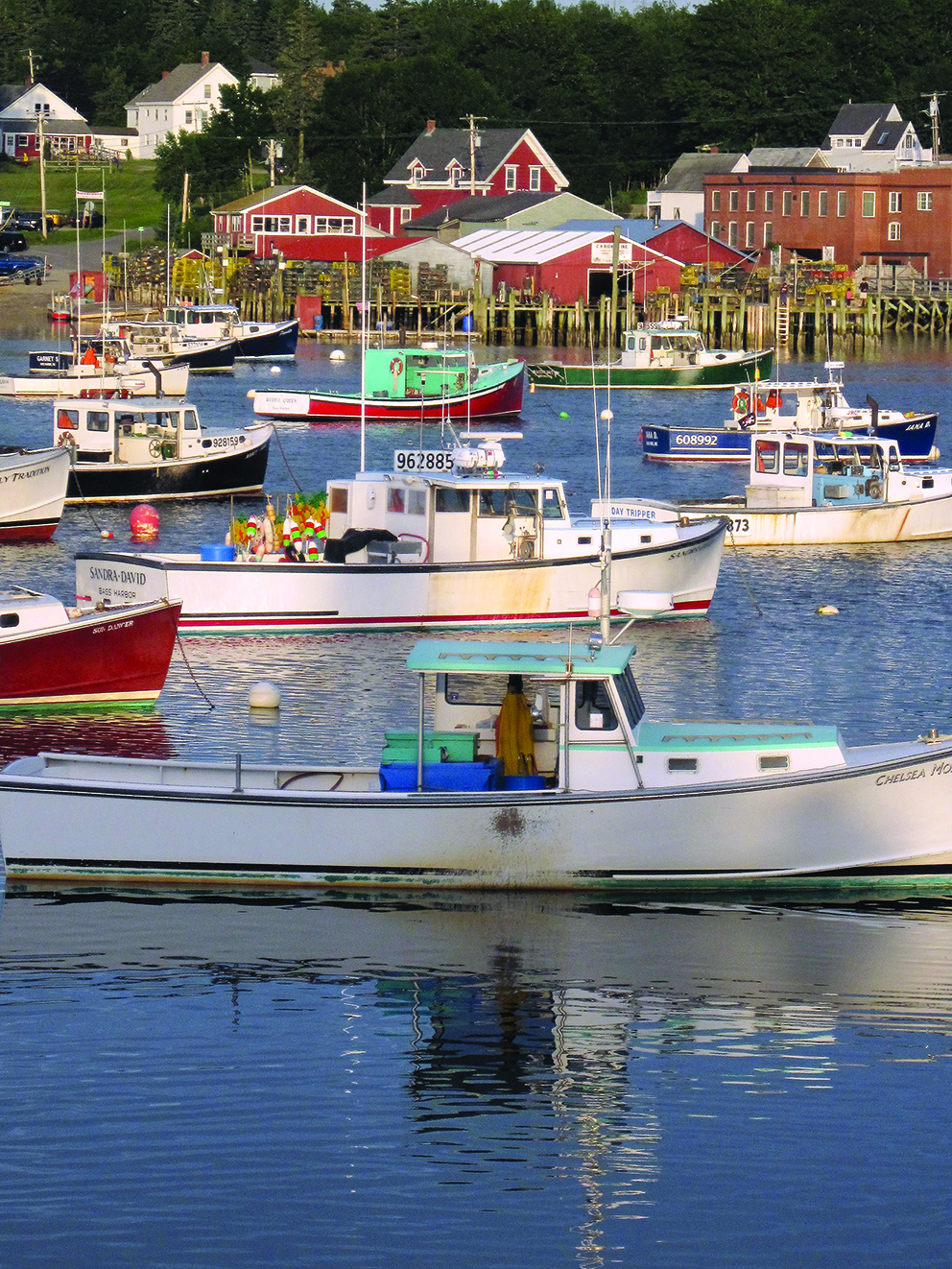 The eastern-most state in the United States, Maine’s coastline runs 515km from north to south and encompasses more than 5,600 km of tidal shoreline with more than 5,000 coves, bays and backwaters. Major jumping-off points for sailing adventures are an easy 4-6-hour drive from New York City or Boston. Sailors have plied the water of Maine for centuries. The state is best known for its cold-water lobster fishery, which produces a catch of almost 55 million kilos of clawed crustaceans each year. The harvest is worth over $1.5 billion. These succulent creatures are a far cry from the spiny lobsters Sydneysiders enjoy in local eateries. American lobsters can grow to beyond two kilos and provide not only a tender tail for consumption but also meat-rich claws which some say produces the sweetest taste of all. Each Maine lobsterman can set 450-600 traps. Each string of traps bears a distinctive set of markings on its floats. At times, the visiting boater is confronted with a veritable sea of buoys as you weave your way from point to point along the coast.

Here’s what the visiting Australian sailor needs to know to get the most out of your Maine cruising vacation. First, decide when you want to make your trip. Maine’s cruising season runs from June to October. Many locals say the months of September and early October provide the best combination of weather and less crowded conditions. Next, gather your crew to get an idea of how big a boat you want to charter and for how long. While you’re at it, poll your mates to see if a sailboat with a captain and cook is more to your liking or if you’d prefer to head out on your own. Your reporter has done it both ways. 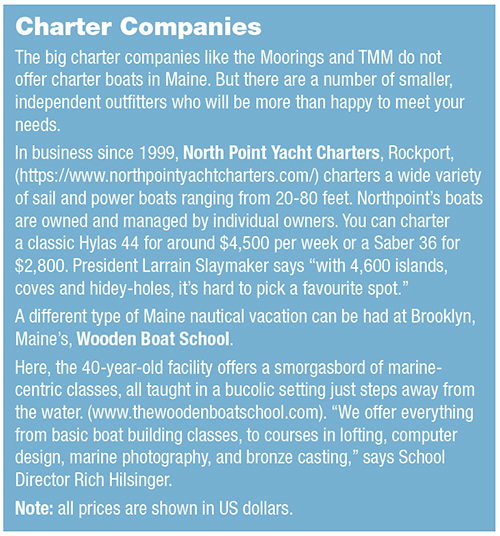 Briefings at charter companies cover all the basics. They can suggest itineraries of 5-10 days or 14-days. The sailing is generally straightforward with plenty of deep water, except where a rock or two pokes its head above the waves. Navigating in the fog is not for the faint of heart. And the 3-4 metre tides can make anchoring and shore excursions problematic. Your next decision involves a cruise jumping off point. Bear in mind, that one could spend a very enjoyable five days cruising around one of the many large bays that abound and never put more than 100 km under the keel.

Most cruisers, however, seem to be in a hurry to stretch their legs with a North-South voyage.

For that reason, I suggest looking at the charter companies in the Camden and Rockland area. From there, you can poke around Penobscot Bay, head up to Deer Island, make a stop in Southwest Harbour, visit Bar Harbour and return safe and sound in about a week’s time. Penobscot Bay for example, spreads 40 miles long and 15 miles wide, filled with more than 200 islands. Between them lie great stretches of open water and small, winding thoroughfares. Along their shores are bustling fishing communities, quaint villages, isolated outposts, and uninhabited beauty. This is the heart of cruising in Maine, and some of the best cruising in the world.

No matter where you stop, good food is not far away. Almost every town boasts a lobster “pound” where local lobstermen drop off their daily catch and where you can eat your fill of steamed lobsters, clams, potatoes and corn on the cob. Whole lobster dinners with all the fixings go for under $25. You can also get lobster dinners “to go” for enjoyment in the cockpit of your boat.

Last but not least on your Maine cruising vacation check-list is clothing. Average temperatures during the day in June and July are around 26-28˚C. The thermometer can dip to around 10-12˚C at night. It gets a bit cooler during September. Be sure to pack your foulies as summer squalls are common. Average water temperatures are around 12-15˚C. And don’t forget to load up on insect repellent when you provision for your cruise. Maine’s black flies and mozzies are ferocious. 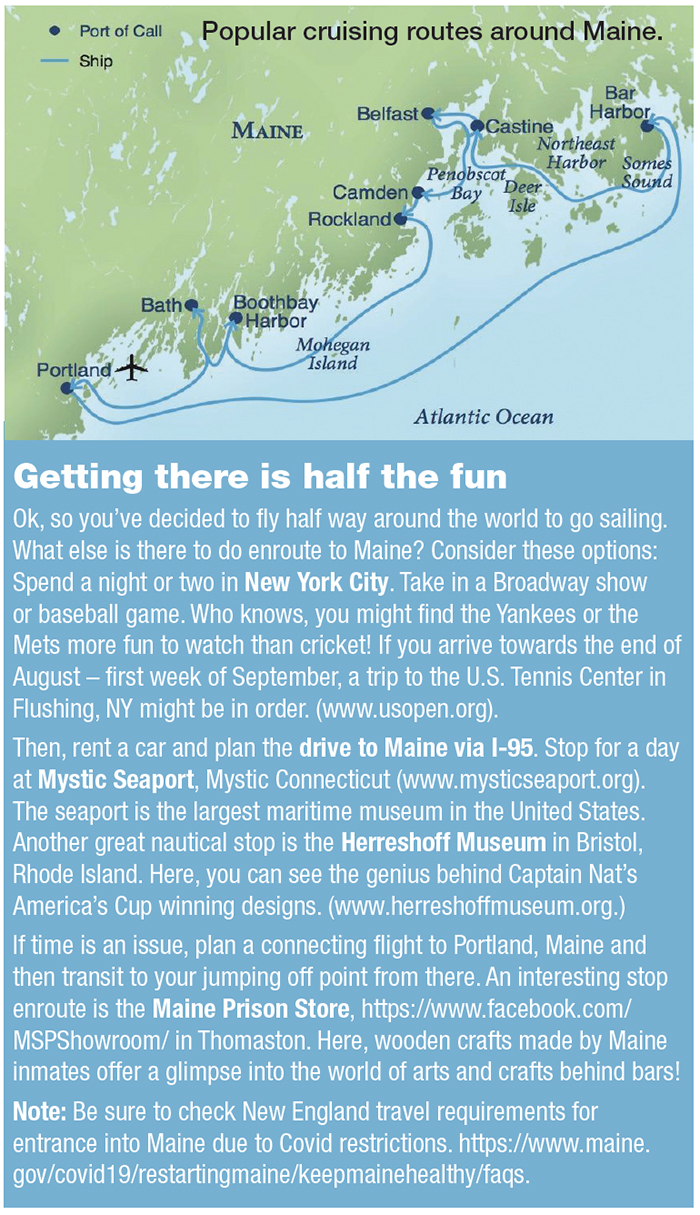 A cruise in Maine can fulfil a life-long dream of idyllic sailing combined with just the right amount of land-based adventure. So, go ahead and check it out. After a night or two on the hook in Penobscot Bay, you’ll soon forget that long flight over from Down Under and will begin to make plans for your next Maine adventure in years to come.