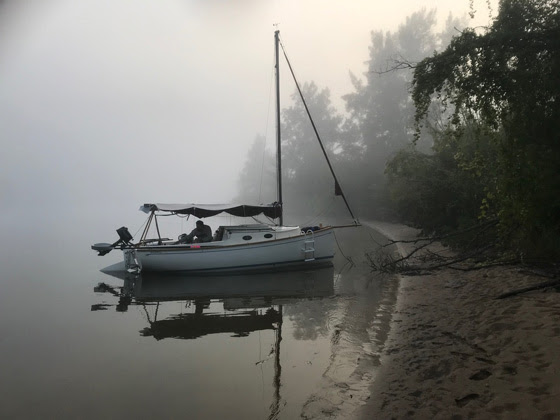 For some reason this trip had been on my mind for years. It may be due to its historical significance in the settling of Sydney, or the book The Secret River written about a gaffer plying its trade, or because I had travelled across it hundreds of times, and only knew the eastern side.

We had discussed this trip and joked about it with one of my staff, Kevin, who spent a lot of time on the river as a kid with his brothers. We talked about sailing and rowing a 20′ gaffer in period clothing and beating the drum (Kevin and I would be dressed in convict attire of course).

We talked about the length of the river (120km) from Windsor to Brooklyn, and how difficult it would be to sail due to high cliffs and the tide. Also, the amount of traffic on the river that could make it dangerous as well not wanting to use the engine so it would be an authentic experience.

The scene was set, now all we had to do was finish the boat and live our dream of raiding the Hawkesbury.

Raid: a sail and oar adventure. This is a leisure pursuit combining sailing and rowing. It involves a fleet of small boats capable of being rowed and sailed, exploring a coastline or inland waterway over several days, often with some competitive element.

We had launched the Bluewater Cruising Yachts Cygnet 20 aptly named Cygnet and tested her systems making a few changes, namely, the engine position which greatly improved her performance and handling. Other than that she has essentially stayed the same with a few changes to her interior decor on the last three boats.

I felt cruising inland waterways would lack a sense of adventure and the fatigue factor would not be such a challenge. I had cruised the Whitsundays, Tasmania and New Zealand on our Bluewater 420, China Girl, gaining a sense of satisfaction on completing a passage. This trip had the added difficulty of being in a much smaller boat but had to compete with my other boating experiences.

The boat was quick to set up and had been extensively tested with good race results. We approached Croker to specify the oars and rowlocks. He also put me in contact with Rowfit International in Tasmania who specialise in competition rowing equipment.

We tested rowing the Cygnet on Lake Macquarie which was not ideal due to a breeze kicking up a slight chop. The next time we would test her would be on the Hawkesbury River at Windsor which was scheduled for the June 2019 Long weekend.

We spent a good amount of time planning the logistics of launching Cygnet at Windsor and retrieving downriver, food, sleeping gear, crew, etc. We were now ready to depart Windsor at 3.30pm with our first test to row/sail 9nm against the tide just past Cattai. We were all excited albeit with a little trepidation not knowing what to expect, and whether we would even make it. This increased the excitement and made it a real adventure.

The crew were myself, David Bradburn, 54 (Cygnet Builder), Will Hardcastle, 63 (Cygnet Designer), Will Bradburn (16) and Jessie Rose Bradburn (12). We also had company in the form of a 3.6m kayak crewed by James Christie, 29 (Shipwright) and Shaynah Andrews, 28 (PhD).

This was going to be the trip of a lifetime and we were eager to begin. Will H commented while driving to Windsor that if there is fog it usually means no wind. (This proved to be the case over the whole weekend). Setting off from Windsor boat ramp we were keen to see if we had what it took so Will H started rowing for 30 minutes then I would take over followed by Will B.

The air was cool. We were averaging 1.5 – 1.8 knots, and we were quickly into the food and snacks. There was no wind and the river was glassy smooth. Not long into the trip Jessie Rose let it be known she didn’t want to just be a passenger and wanted to row as well. She rowed for 15 minutes at 0.7 knots which was still going forward.

We could check our speed/distance with the Navionics app on our phone and iPad. The scenery on this part of the trip was mostly farms with irrigation pumps along the river and dirty brown water. As we neared the end of this first part of the trip the river was lined with high cliffs and thick bush. We arrived at 8.30pm, however, the night was still quite light.

We managed to find a small, sandy beach section in the dark which just so happened to be where James and Shaynah in the kayak had arrived two hours earlier after paddling hard to reach their accommodation before dark.

James left his phone in the kayak so got a lift from hotel staff to retrieve it by which time we had arrived. We spoke briefly but couldn’t see one another due to the thick bush between us. We had passed the first test! The kids were keen to explore the small beach in the dark with an oil lamp and torch. They were excited to start a fire and cook marshmallows.

Damp wood made lighting a fire difficult but we soon had a blaze going and chicken rolls, beer and drinks were passed around. We were well pleased with ourselves. We checked the tide charts and planned to leave on the high tide 7.15am. My shoulders were on fire – a good feeling as I knew I had worked hard. It was quick to sleep for us adults but the kids were buzzing with excitement and I remember falling asleep to their laughter and giggles.

We were snug in our sleeping bags and very cosy in Cygnet. The kids in the forward V-berth, and the adults down each side. After waking we knew the tide was with us and we couldn’t lose any time as the it would turn again at 1.00pm.

We untied the bow line and started rowing into thick fog. The river was probably 60m wide but we could barely see the sides. We rowed for an hour before we felt a faint breeze. The river was now meandering with magnificent gorges and native bush settings.

We set sail in the gentle breeze and I understood why harnessing the wind was such a technological advancement. We sailed for almost two hours but the fickle wind soon left us and we drifted at 1 knot with the tide. Back to rowing but now with the tide which is more satisfying than the previous afternoon when we had rowed against it. We were rowing at 2.5 knots and feeling good.

As we headed down river we could hear the roar of high-powered race boats. As we slowly approached the roar of engines increased until we came across the Dargle Power Boat Races and had to wait a short while until a race was finished. We were then advised to get through as fast as possible. We lowered the outboard and flattened it speeding along at 5.5 knots with a stern wave.

Hundreds of spectators lined the shoreline watching curiously as the Cygnet motored through the course. We all came on deck to show them how it should be done. Once through there was little wind so we started sailing and rowing again. This part of the trip was slow going. Two hours of effort gave little progress as the tide had turned.

A breeze finally kicked in, however, after tacking three times across the river we had barely made any ground so it was decided to stop at another small beach and wait until the tide turned at 6pm.

This was a lovely three hour stop where we had chance to answer nature’s call, check out the riverbank, eat prawns, drink beer and prepare our early dinner – chunky soup and bread rolls. A couple of curious locals come down to the water’s edge to say hello which scared the children due to their assertive behaviour. They were rewarded with apples for their curiosity after which we lit the mandatory camp fire.

A small repair job to straighten the Windex which had bent after being caught in the trees. Now rested and fed we felt confident we could make it to Wisemans Ferry 12nm away. What was good about this leg was I saw my kids, Will and Jessie Rose come of age and really get into the challenge with Jessie Rose rowing for 45 minutes and Will 1.5 hours. It was wonderful to observe and talk to them about what we were seeing and experiencing.

We rowed through the early evening passing ski parks, caravan parks and holiday shacks along the shore which was interspersed with large cliffs. Reaching Wisemans Ferry around 10.30pm the tide had changed, and Will H was now rowing the last leg against the tide. We picked up a mooring at 11.15 pm next to the second ferry for a well-deserved sleep. I felt so cold having steered for 2.5 hours in my shorts and jacket. It took me hours to warm up in the sleeping bag.

The next morning, Monday, we had a distance of 25nm to travel. High tide was 6am, and a 10 knot NW breeze was forecast. It was a beautiful, foggy morning, and the river opened up with a much wider expanse between gorges.

As the Cygnet slowly cruised downriver, we noticed the boating styles had changed from skiboats to houseboats and fishing boats. Mangroves were abundant and we rowed for five hours before the breeze kicked in to push us to our destination at Brooklyn.

We realised we may need to motor for the last 8nm to get to our finish in good light. As it turned out in the last two hours we motored for one hour and sailed for one hour at a respectable 4.5 knots.

Success! We had reached the Deerubbun boat ramp, Mooney Mooney Point, just before the Hawkesbury River bridge. We achieved what we had set out to do and were a lot wiser in what you have to deal with when raiding rivers.

We were well pleased with ourselves. Our cosy little yacht made it easy to work the river and stop when necessary. Cygnet was very comfortable – an amazing craft able to accommodate four crew all taking turns to row, sail and fully participate in the challenge which made it very satisfying for all.

This adventure brought us closer together and is definitely something I want to do again with the kids. I am now dreaming of the Hunter River which is 300km long and loaded with history. I can’t wait!

The Cygnet 20 is a modern classic looking trailer-sailer with special features such as water ballast making it light to tow, 10 minutes to set up the carbon mast and spars, sleeps 4, easy and fun to sail, and the added beauty is the recent optional fitting of 10ft Croker carbon oars so you can now row the boat and benefit from some form of exercise when there is no wind.

In the near future Bluewater will be organising and promoting “Raids” – sail and oar events in Australian lakes, rivers and waterways with the growing number of Cygnet 20 owners increasing makes for an exciting time to be in the marine industry.

Further information on the Cygnet 20 can also be found on our website which includes drone footage of the latest 3 Cygnet 20’s sailing on beautiful Lake Macquarie click here.