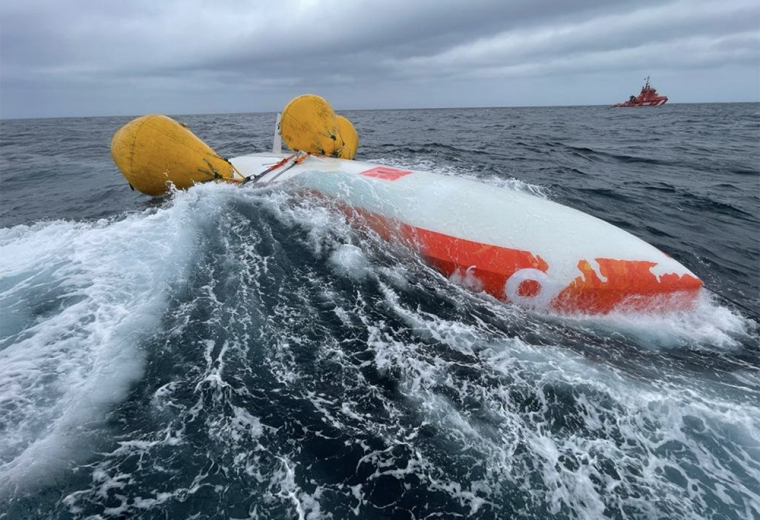 A French sailor, aged 62, has survived 16 hours in an air bubble inside his capsized sailing boat in the Atlantic Ocean in a feat the Spanish coastguard has labelled as ‘verging on impossible’.

The 12-metre Class40 sailing boat named Jeanne Solo Sailor was around 14 miles off the Sisargas Islands, near Spain’s north-west Galicia region, when it capsized. A distress signal was received at 20:23 local time on 1 August.

The Spanish coastguard was able to locate the capsized boat but the sea state was too rough to rescue the sailor.

Incredible footage shows a diver being winched onto the upturned boat to check for signs of life. The coastguard has said that the sailor – now known to be Camprubi – responded to the diver by banging from inside the hull.

Due to the adverse conditions, the sailor had to wait until morning to be rescued and the rescue team attached buoyancy balloons to the yacht to stop it from sinking.

Pablo Fole, a member of the rescue team says: “We had a bit of a hard job, not knowing for sure if the missing person was in there, the constant rocking and the accumulation of hours that were adding up little by little. Despite the lack of control and not knowing what to do at certain times, perseverance and not throwing in the towel made it possible for us to save the life of a person who fought for 16 agonising hours.”

The following morning, two divers swam under the capsized boat and found the sailor in the air bubble wearing a neoprene survival suit and submerged in water up to his knees.

All images courtesy of Salvamento Maritimo