It was great to be back … 2022 Sydney International Boat Show 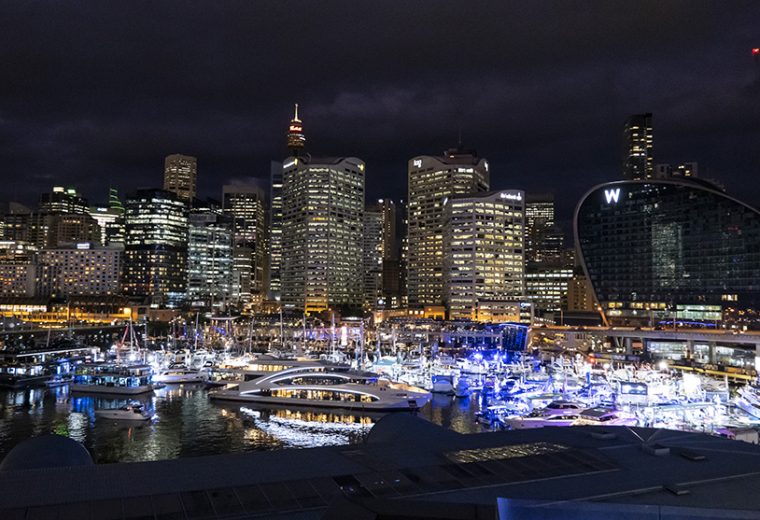 The Show attracted more than 45,000 visitors and presented an enticing showcase of the boating lifestyle on, in and near the water, bringing a festive atmosphere to Darling Harbour, in the shadows of the Sydney CBD.

Boating Industry Association (BIA) President Andrew Fielding said interest in boating was riding high and it was great to be back with the 2022 Sydney International Boat Show, returning after a two-year hiatus.

“We are a nation of boaters with one in 10 Australians holding a boat licence, and almost one in five households in NSW owning a boat or watercraft, making it one of the leading pastimes nationally and in the state of NSW,” Mr Fielding said.

“Boat registrations grew by 18,500 over the past 12 months across the nation, taking powerboat registrations to 925,000 and personal watercraft registrations to more than 90,000. Of course, this doesn’t include the countless number of non-powered watercraft people are buying for their healthy lifestyle benefits such as stand-up paddleboards, canoes, kayaks and sailing dinghies.

“It was great to see crowds surpass 45,000 over the past few days. People enjoying the opportunity to get out and ignite their passion for boating and experiencing all that a boat show like this offers.”

To highlight the BIA’s commitment to growing the industry of the future, a Careers Day was hosted on the Show’s opening day and attended by approximately 300 students, eager to hear from marine experts and learn more about job opportunities within the industry.

Exhibitors were full of praise for the 53rd Sydney International Boat Show, reporting strong sales and genuine leads through the five-day event.

ILIAD Catamarans CEO Mark Elkington said the ILIAD 62 was released globally at the Sydney International Boat Show with buyers flying in from around Australia, the Asia Pacific region and the USA.

“By the close of day two, the ILIAD 62 on display had been sold to clients in the US, and two additional orders were placed by Australian buyers,” Mr Elkington said, adding a further two ILIAD 53 catamarans also sold at the Show.

“We expected strong interest in this new release and knew we had a market-changing design so the endorsement by the market is very pleasing. We have a highly qualified buyer pipeline from the boat show and expect a number of orders to follow in coming weeks.”

Hunts Marine owner Jon Hunt said his family-owned and operated marine retailer has had a presence at the Show every year since its inception.

“It was very strong this year, good sales and good enquiries, especially in the larger Quintrex and Yellowfin boats and across the Revival fibreglass boats,” Mr Hunt said.

“Interestingly, the average dollar value of sales was way up and that’s a pretty good thing. Even at entry-level, we’re seeing a higher dollar value across trailer boats.”

Blakes Marine marked its 30th year exhibiting at the Show with strong sales and keen interest from new and experienced boaties alike.

“Of the five brands of boats we had on display, we were the only dealership selling those at the Show which was a great point of difference for us,” owner Alan Blake said, reporting strong sales across the Stejcraft and Bar Crusher brands.

“With supply and demand tight across the industry and price rises coming, there’s a sense of urgency that gave some of those buyers a little push.

“We saw a lot of new people coming into boating and, of course, everyone’s trying to see the newest and latest and find out from us what’s coming next.”

Australian Superyachts Managing Director Richard Morris said he was pleased with the high-quality buyers and genuine leads the Show attracted in 2022.

“We have letters of intent out for three Majesty superyachts, three Nomad explorer yachts and expect to close deals on five Oryx 379 sports cruisers in the coming days,” Mr Morris said.

“Clients were very interested in our commercially compliant superyachts for their charter businesses (and) we have placed numerous orders for these charter superyachts that will be seen operating in Sydney next year.

“We are very pleased to have been in the Sydney International Boat Show for the 10th time since 2012 and we’re looking forward to having a much larger display in the same position next year.”

“It’s been amazing, attendance has been among the best and there have been strong sales and genuine enquiries across our ranges from the entry-level NXT to our top-of-the-range X- Series,” Mr Harris said.

“We’ve seen a lot of return customers ready to upgrade after a few years of COVID and a lot of rain and now they’re looking forward to a good season ahead.”

Short Marine Directors Sam and Ryan Short said the 2022 Sydney International Boat Show was one of the most successful events their family-owned company had participated in.

“We absolutely loved the location we were in and are already looking to expand the size of our stand next year to include a range of Grady White boats, Capelli Ribs, Viking Yachts and Valhalla Boats on display.”

“The Sydney International Boat Show gives us an opportunity to be front of mind with consumers which is so important after the disruptions of the past few years,” he said.

“We’re particularly impressed with the past five days and we can only see us building from here as we head towards 2023.”

QMC (Queensland Marine Centre) has exhibited at the show since 1996 and reported another successful event this year.

“It was a great show and we had very positive feedback and results. Our Boston Whaler range and brand was a standout and we saw some good sales and orders throughout the show,” QMC Dealer Principal Andrew Bennett said.

“Of course, the good weather helped and it looked fantastic outside.”

Taiga Motor’s Matthew Ng said the Show was the perfect launchpad for the company’s latest product.

“With strong pre-orders and hundreds of demo rides booked, we were pleased with the interest from both existing and new-to-sport consumers seeking a sustainable way to enjoy the water, without compromising on performance.”

New to the Show in 2022 was Jobe Watersports, exhibiting its premium offerings from stand-up boards and lifejackets to its popular Seascooter.

“While Jobe Watersports has been around for over 30 years, it’s the first time in the history of the brand we’ve attended the Sydney International Boat Show,” General Manager Steve Mandis said.

“Working with our retail store partners, we exceeded our sales objectives and we’ll be back next year!”

“The Show was a great success for Navico, attracting a wide range of not only boat owners to our stand, but also prospective buyers enquiring about electronics for new boat ownerships,” Trade Marketing Executive Brad Verkerk said.

“We had a lot of hype around some new products across all brands of Lowrance, Simrad, B&G and CMAP with very positive feedback.

“The Navico team is already looking forward to the 2023 Show!”

“Given the past few years, everything felt very unknown going into this year’s Show,” Mr Haines said.

“Despite that, we were very excited to have both returning and new clients stop by, as well as customers with boats on order coming along to check out the Show.”

Inflatable boat specialists Marine Co said this was one of the company’s most successful Shows to date.

“Our stall was so busy over the weekend we had people returning on Monday to seal the deal with four sales on the last day alone,” Director Ben Pugh said.

Twin Disc Pacific Managing Director Glenn Frettingham said the marine equipment company was ecstatic with the outcome of this year’s Show and reported the team did more demonstrations of its Seakeeper 1 stabilisation device and Twin Disc Quickshift and Express Joystick System than at any other show.

“From our demonstrations, we have generated an exceptional number of sales opportunities, so we are incredibly grateful to have been part of the 2022 Sydney International Boat Show,” Mr Frettingham said.

There was also strong interest in boat share with both Phil Pitt of Pacific Boating and Andrew Young at Boating Syndication Australia reporting an excellent show with significant interest from people new to boating.

The 53rd annual Sydney International Boat Show was presented by the Boating Industry Association (BIA) and Mulpha Events and proudly supported by Partner in Safety – Transport for NSW.

The 54th Sydney International Boat Show returns from 3 – 7 August 2023, at the ICC Sydney and Cockle Bay. Subscribe for updates and news at sydneyboatshow.com.au.