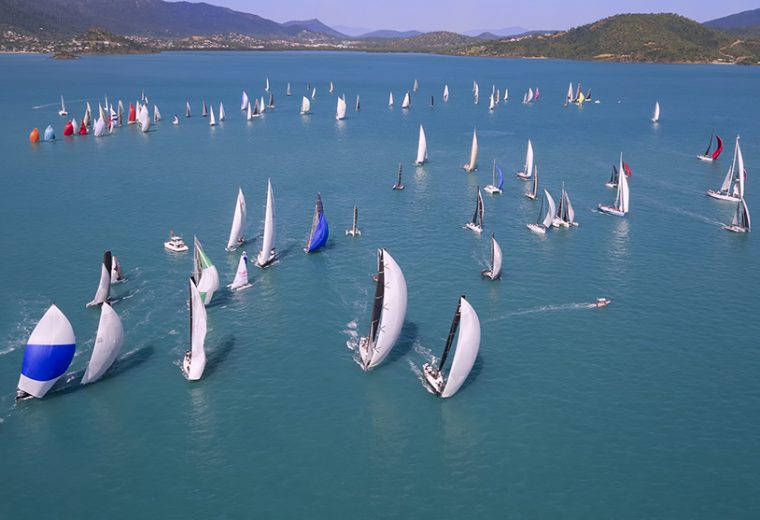 A record fleet of 185 plus entries in 2022, surpassing the all-time record of 133 boats at Airlie Beach Race Week (ABRW) in 2016 will enjoy their first major regatta of the northern regattas season when the start gun fires in the Whitsunday Islands from 11 to 18 August.

Blame the huge numbers across the board at all northern regattas this year on post Covid lockdown frenzy, with many fired up again after ABRW was the only major sailing event able to go ahead in Queensland in 2020 and 2021.

“We are thrilled with the record entries across yachts, multihulls, sports boats and off-the-beach boats. We’re looking forward to welcoming one and all,” Ross Chisholm, WSC Event Chairman said.

The Rating Passage Series is bolstered this year by those wanting to put in initial practice ahead of the Australian Yachting Championships, to be held at Hamilton Island Race Week, starting on 21 August.

Among the entries are two yachts new to the regatta that come with experienced owners. Victorian Robert Date will arrive with his latest Scarlet Runner, a Carkeek 43 launched in January. In her debut event, the Adelaide to Port Lincoln Race, Scarlet Runner finished fourth overall.

West Australia’s Anthony ‘Captain’ Kirke is bringing his latest Enterprise, named ‘Enterprise Next Gen’. She is a Botin/Carkeek GP42 launched in 2009 and comes from the Fast 40 circuit in UK, but since modified for offshore sailing. Kirke will bring a gun WA crew with him and their hopes are high.

Regulars and competition for the ‘newbies’ include Ray ‘Hollywood’ Roberts with his Botin 40, Team Hollywood and the omnipresent Peter Sorensen at the helm of his Sydney 38, Advanced Philosophy. Also in the field are TP52s; Gordon Ketelbey’s Zen and Andrew Kearnan/Peter Wrigley’s Koa, among others.

Pristine waters contribute to second-to-none race courses, breathtaking scenery, sea life at play and a family-friendly social program that is even bigger and better this year. They all add to the attraction and success of the Whitsunday Sailing Club (WSC) hosted event.

“We try to refresh Airlie Beach Race Week Festival of Sailing a little every year to keep it interesting, to make sure competitors return and to draw new ones in,” Chisholm said. “Entrants won’t be disappointed with the courses and we planned a social program to suit them and families and friends ashore too.”

Onshore, first off the bat, or boat, is the Skippers’ Briefing followed by the Welcome function on Thursday 11 August. From 6.30pm competitors and their supporters will enjoy entertainment from Matty Angel at the Festival Village on the lawn at WSC.

Each day after racing is a prizegiving with musical entertainment, with dinner is available nightly at the 20 Degrees South Bar & Restaurant at WSC (bookings are essential with such a high number of entries this year). There is also food and bar service available at the Festival Village.

On Sunday 14 August, the Long Lunch and Wine Tasting is on from 12pm. Bookings are essential as this is a popular event. Following racing, all will rock to entertainment from the All Stars with Emma Pask, followed by the Mason Rack Band.

Monday is lay day when lunch will be available all day at the Club. This is the ideal day for competitors to relax or get out and explore the many local attractions.

On Thursday evening, the event will close at WSC with a fireworks display and entertainment from ‘The Feel’.

Please note, due to COVID Safe Compliance requirements Presentation events may be restricted.

Those still wishing to enter may do so at the Standard Entry fee price as per the notice of Race on the official site.

Airlie Beach Race Week Festival of Sailing is supported by the Queensland Government through Tourism and Events Queensland and is a feature on the It’s Live! in Queensland events calendar.

For NoR, entry and all information on Airlie Beach Race Week, please visit: www.abrw.com.au or www.whitsundaysailingclub.com.au