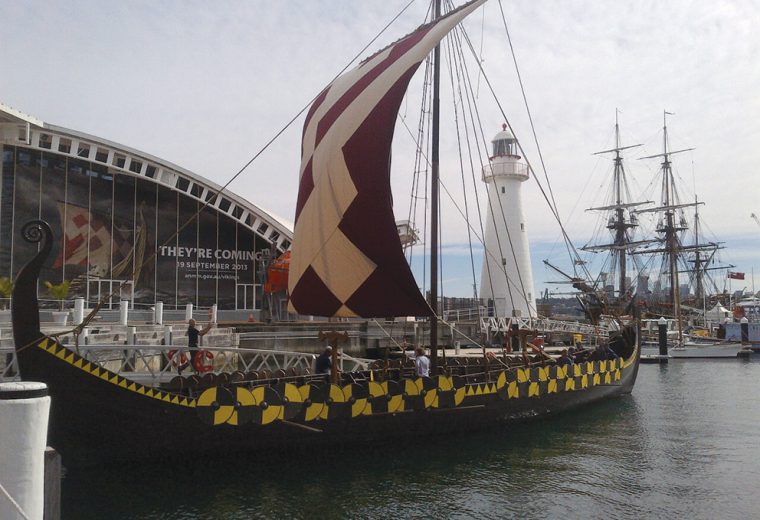 It’s not a Hollywood blockbuster yet but in the backwaters of Sydney Harbour a tragedy is unfolding of the Viking kind.

People would have noticed or visited the Gokstadt replica 800 A.D. 23m. Viking ship at the ANMM some years ago. Built in Perth in the mid 1980s makes her near the oldest of two replicas of this type in existence in the world. Renamed Aegir she is the sister ship to Gaia built in the 1990s now berthed in Sandefjord south of Oslo. Gaia sailed to Rio De Janeiro for the first Earth Summit. Both vessels are assets of their respective communities and share a common cause of fighting for the environment.

The tragedy is unfolding ever so slowly for this unique vessel now partly submerged in custody of TfNSW Maritime at Rozelle Bay wharves. Apparently unable to be pumped out with shore power and the fees for being alongside these wharves continue to add up.

The Charitable Cultural organisation responsible for the vessel is unable to meet the demands placed upon it by a Notice of Disposal. Maritime procedures have been lenient towards the Pyrmont Heritage Boating Club (PHBC) directors who for some months have attempted to find a berthing solution to save the vessel from destruction but thus far to no avail.

The Aegir saga started in August 2021 when, due to the new Sydney Fish Market development by INSW, the club received a Notice to move from its berth alongside the fish market wharves. The search for a berth for Aegir began and despite the cooperation of INSW, Sydney Fish Market, TfNSW Maritime, CI Australia and friends around the harbour no berth could be found.

Progress stops for no person, building or ship and the resultant decisions to move the vessel have almost ended in tragedy. Third parties forced movement of the Aegir without permission of the community organisation owners. The result is damage to the vessel and infrastructure of the Cultural organisation.

The saga continues with the directors of PHBC continuing to engage with Maritime to save the vessel from destruction. This 23m open boat has sailed from Perth to Sydney over the top and a book is being written about this voyage in the 1990s. Let’s all get on board and save a unique vessel.

Have a look at the ship and PHBC community story here: http://pyrmontheritageboatingclub.blogspot.com/

Aegir needs a berth alongside for the foreseeable future and this is not an easy ask even in the Harbour ‘which could shelter a thousand ships’. Berths must be designated places and come with large fees. Aegir has accepted a quote for slipping and work to make her suitable for mooring.