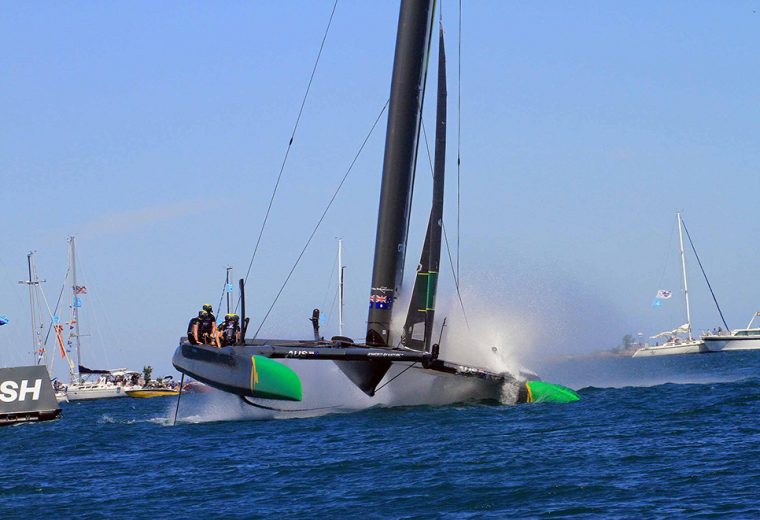 The Australian team had just mounted an improbable comeback by stealing upstart Canada’s thunder with an impressive win in the Chicago Finals in the high-powered foiling catamaran’s international circuit third year of competition.

Counting three wins to close out last year’s season, including a Grand Finale victory that included a million dollar (US) prize to the winning team, the Chicago victory makes 5 victories in a row for Tom Slingsby and his Aussie teammates.

The Australians had a mediocre first day of racing in blustery winds just off Chicago’s iconic Navy Pier. “We never quite got it going with three middle-of-the pack finishes” Slingsby said. “Then, we started Day Two with a dead last finish in the last race. We stormed back in the fifth race and won it going away.” That victory put the Australians in the winner-take all final against Team Canada, helmed by Kiwi Phil Robertson and Team Great Britain skippered by Sir Ben Ainslie.

“In the end, we were able to get a good start and Kyle (Langford) kept the boat flying despite having to deal with winds that were 10 knots one minute then 5 knots the next.”

Just before the Chicago event, organizers announced a three-year deal that will bring the series back to Australia next February. “We are excited to have this deal in place,” Slingsby said. He complemented the City of Sydney and Destination New South Wales for making it happen. “This shows the support we are grateful for from our hometown. This deal is good for SailGP. It is good for team. And it is good for Sydney.”

Team Australia’s hot streak makes Tom Slingsby just a little nervous. “I’m not a superstitious guy … but I find myself eating the same thing for breakfast on race days. I am a super competitive sailor. Any little advantage helps.”

The 37th Americas Cup will be contested 2024  in Barcelona, Spain We asked Tom how he was going to balance his SailGP responsibilities with helming the US boat. “Frankly, I don’t  know how it’s going to work out. For sure, I will complete my Sail GP obligations. We’ll just see how it goes.” The US team, lead by CEO Terry Hutchinson, trains in Pensacola, Florida. “I’ll spend some time with the team down there,” Slingsby said. ”Terry and I have a good relationship. I am sure we can work it out.”

I asked Tom who is known for his quick temper, how he and the mild-mannered Terry Hutchinson would get along. “It will be fine,” he said. “I am just so competitive…that’s what makes me what I am. I’m not going to dial it back. Winning is the key.”

After the Chicago finale, Slingsby hung back for 20 minutes signing autographs for admiring young sailors. “When I was a kid, I’d hang around and chat up my idols and get them to sign my hats. Doing that today is just part of the job. Giving back and inspiring a new generation of kids is what it’s all about.”

Slingsby hopes to return to Sydney in February leading the highly-competitive Sail GP Pack. The Australian event will be the 9th in the 2022-23 season. The Finale of the season will be held again in May in San Francisco.