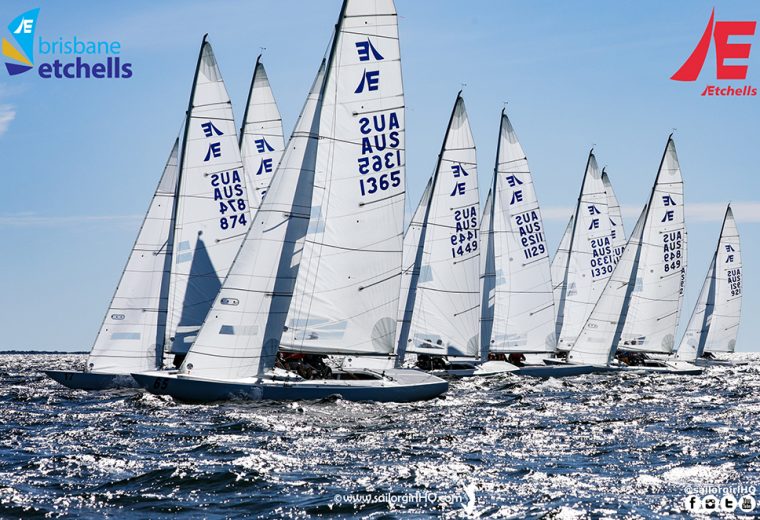 The Etchells Winter Waterloo Cup was raced on 11 and 12 June at the Royal Queensland Yacht Squadron.

Peter McNeill, Andrew Smith and Kane Sinclair sailing Lucy AUS1082 were the final team on the podium, followed by Cam Miles, Grant Crowle and David “Towers” Sampson on Tango AUS874, and Waterloo Too AUS921 skippered by Noel Paterson with John Warlow and Will Thompson.

“It means a lot that we can race on our own waters against three previous World Champions and test ourselves against them, and be in the mix with them,” said Lucas Down TAG AUS1330 mainsheet trimmer.

“It certainly did us no harm that they felt pretty intent on beating each other up, which let us fly under the radar” he continued on the battle between Lisa Rose, Lucy and Tango.

“We felt we probably had a bit of an edge in terms of local knowledge, but for the boat to be on the pace, and to be able to race against world class guys meant a lot for us. We are really grateful that the local fleet was able to pull a regatta together so quickly, and that the Sydney guys supported it” he finished.

“It feels like the class is gathering strength again, they are a really classic boat to sail” said Todd Anderson, skipper for the winning team.

“The Etchells really teaches you a lot about sailing in general,” he concluded, reflecting on the win and the staying power of the Etchells class.

Three races were sailed on Saturday 11 June on the offshore course past Green Island from the Royal Queensland Yacht Squadron in a west-southwest breeze, with all courses set on an axis of 250 degrees varying from 8-13 knots.

At the top in Race 1, Peter McNeill, Andrew Smith and Kane Sinclair sailing Lucy AUS1082 were well out in front, making the most of the up pressure phase of the breeze, over TAG AUS1330, Tango AUS874 and Lisa Rose AUS1449.

On the second down pressure work TAG AUS1330 took the lead, however, Lucy AUS1082 and Lisa Rose AUS1449 converged with them at the top mark, making for a great battle into the downwind finish.

Around the top mark in Race 2, it was TAG AUS1330 over Tango AUS874, followed by Ron Jacobs, Simon Reffold and Andrew Cutler on Karabos AUS932 and Lisa Rose AUS1449.

At the bottom the positions were unchanged, but by the top Lisa Rose AUS1449 had moved into second, and they remained runner up into the downwind finish, unable to catch the speedy locals on TAG AUS1330.

The first attempt for Race 3, a two lap windward leeward with an upwind finish, was a General Recall. The race eventually got away in the most pressure we had seen all day, a chilly 11-13 knots of breeze.

It was Karabos AUS932 who led around the top mark, followed by Lisa Rose AUS1449 and Tango AUS874 who did a long port tack together and were neck and neck into the top mark. African Queen skippered by Jan Muysken with Steve Brett and Russell Stanton rounded in fourth, with Lucy AUS1082 in fifth.

Lisa Rose AUS1449 slid into the lead at the bottom, and TAG AUS1330 got the inside on Tango AUS874 to round second and third.

With the top three boats extremely close, the battle between Lucy AUS1082 and Lisa Rose AUS1449 extended out past the pin end lay of the finish line, and Tango AUS874 snuck through to take the final win of the day at the favoured boat end.

Three races were also sailed on Sunday 12 June on the offshore course past Green Island from the Royal Queensland Yacht Squadron in a west-southwest breeze, with all courses set on an axis of 245 degrees, fluctuating between 8 and 15 knots.

The highlight in Race 4 for sailors and all volunteers on the course was the battle between Tango AUS874 and Lisa Rose AUS1449 down the first run coming into the bottom gate. The luffing dual eventuated in a protest, both ways between the boats, and ultimately affected the overall standings (protest findings below).

In Race 5 of the series, the second for day two, the breeze dropped significantly down to eight knots at times.

Again it was a battle between a familiar four boats, with Lisa Rose AUS1449 eventually winning the race over Tango 874, TAG AUS1330 and Lucy AUS1082 with Waterloo Too AUS921 rounding out the top five.

To finish the regatta, Race 6 was set a little shorter than the others, to account for the upwind finish at the end of the two windward leewards, and to get the fleet home and wrapped up on time.

It was becoming evident that it could be TAG AUS1330’s regatta, and they did not disappoint, winning the final race of the event, and securing the series win in the Etchells Winter Waterloo Cup 2022.

This regatta would not have been possible without a fantastic group of sponsors; Harken, Whale Spars and Savage Pest Control.

The media sponsor for this event and the 2021/2022 Etchells Australia season this year was a major supporter of the class, HillPDA.

For more information on all upcoming events head to www.etchells.org.au.