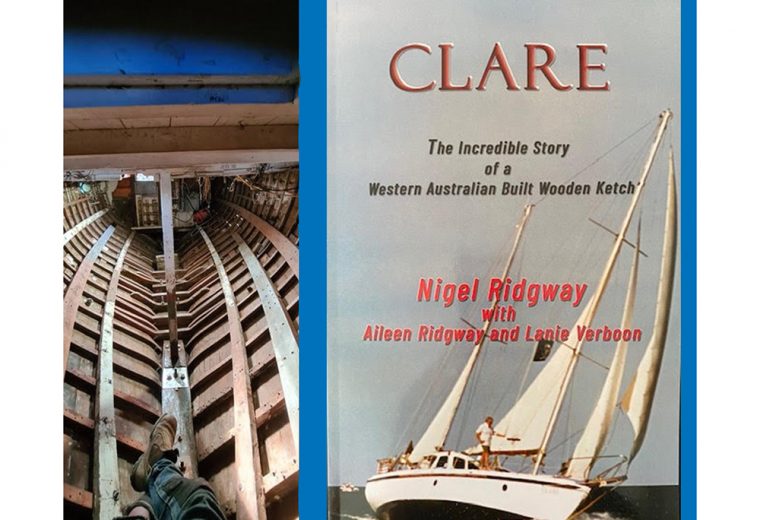 The Incredible Story of a Western Australian Built Wooden Ketch

by Nigel Ridgway with Aileen Ridgway and Lanie Verboon

Nigel traces the history of the Western Australian built ketch, Clare, in this delightful little book. With contributions from the logbooks of his wife, Aileen and Lanie (the owner after the Ridgways) we share the love and frustration of sailing and maintaining a wooden boat.  Nigel takes us on a voyage of discovery when he learns about Clare’s chequered past but is very enthusiastic about her future in the hands of current owner, Brad.

The book also examines wooden boat building in WA and we are surprised to learn that these skills are still alive and well.

A very enjoyable read with many photos, this is a little book every lover of the sea and sailing vessels will want in their library.

Nigel Ridgway was born in Somerset, UK, and was a child of Her Majesty’s services; moving around England, Germany and Jordan. He attended two boarding schools. His early working life was mainly as an unskilled worker, trying many jobs. He emigrated to Australia in 1966 as a ‘Ten Pound Pom,’ arriving in WA after working in Queensland.

He married a 4th generation West Australian lady, Aileen, in 1991. They are very happy. Nigel has always sailed since high school in Germany, and has had many adventures, both overseas and around the coast of Australia. He has a Yacht Master (Ocean) Certificate.

He still plays music and is the drummer with Perth jazz band The New Orleans Heritage Jazzband  and two other jazz bands. Since retiring he has become a Rottnest guide, and an active member of U3A. He’s always had a passion for writing and wrote, Lotus 11 – an Indian Ocean Adventure (1992) and a ‘sortamemoir’ A Different Drummer in 2020 and has just completed ‘Clare – the amazing adventures of our 40 foot wooden ketch.’ He wrote for ‘Cruising Helmsman’ magazine for twenty years. He is a popular guest speaker for U3A and Probus.