After the rough seas of 2020 and 2021, the Australian Wooden Boat Festival is going to be back better than ever 10th – 13th February 2023 on Hobart’s magnificent waterfront.

The iconic waterfront festival is held over four days on the Hobart Regatta long-weekend in February every two years. With tens of thousands of visitors to the site, the festival celebrates over 450 beautiful wooden vessels both on land and on the water. 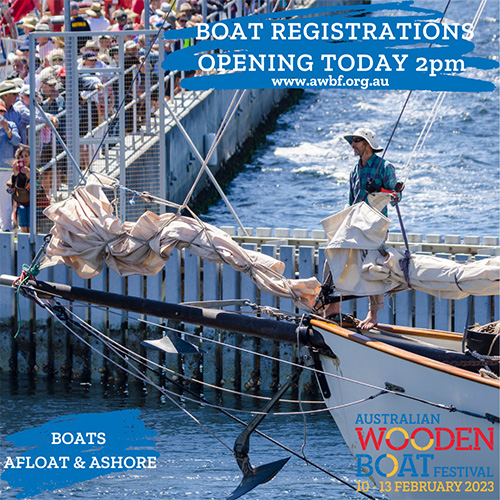 With the on-going support of the State Government, Events Tasmania and TasPorts, and our other sponsors the festival has become one of Tasmania’s greatest free events. The 2023 Festival theme will be Australian Boat Builders and Designers, focusing on the history and culture of wooden boats around Australia.

Boat registrations will be opening Thursday, April 28, 2022 at 2pm (AEST) and the AWBF invites wooden boats of all shapes and sizes to enter. Registrations came in hot and fast for the cancelled 2021 Festival, with organisers expecting record entries for the 2023 Festival.

Boat Manager, Roscoe Barnett has already confirmed 10 tall ships from Tasmania and across the country, and he expects to have a representative boat builder from each state and territory. “We usually have a feature nation and in 2021 it was to be Australia, so we thought why not bring it through to 2023 and focus on and celebrate all the great boat builders that we have here in Australia now and from the past.” Said Roscoe.

The Australian Wooden Boat Festival hosts over 450 boats afloat, ashore and model boats during the four-day Festival. A significant number of wooden boats travel from interstate to attend the Festival and the AWBF expects a large number of participants from interstate in 2023. The AWBF will also be displaying as many Australian Classic sailing dinghies as possible.