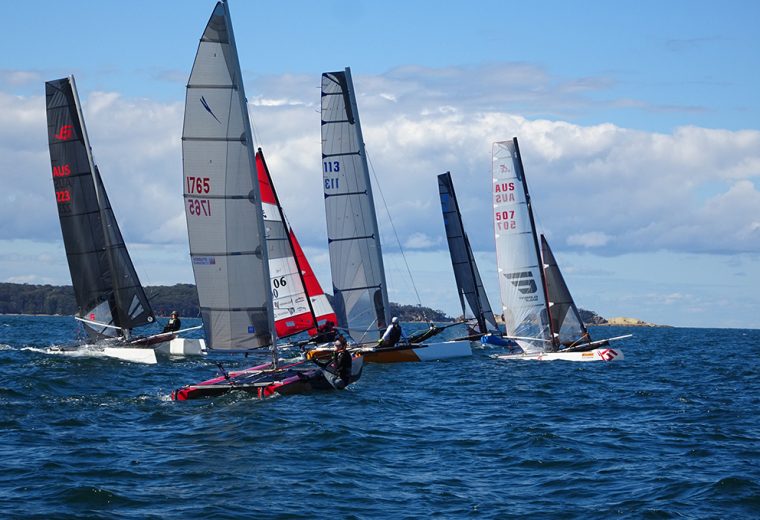 Main photo: Daring tactics at the start of the regatta. Photo by Simon Dunlop

The 2022 Batemans Bay Marina Regatta was a great success with a total of 74 entries. Sailors came from Sydney, Canberra, all over south east NSW and from as far away as South Australia for the regatta.

There were strong fleets in the Lightweight Sharpie, 505, Laser, Hobie 14 and Hansa 303 classes. The VXOne class conducted their NSW Championships as part of the event.

Light winds were challenging for everyone on Saturday. It was a race to get out to the start on time against the tide, even though the start was delayed by 30 minutes. The breeze filled in by Sunday afternoon which made for more exciting sailing. On the offshore course two races were completed on both days. The Sailability Hansa 303s conducted a total of seven races on the inshore course inside Snapper Island.

Champion sailors like Bruce Paine in the Lasers, Rob and Nicole Douglass in the VXOnes, Mick Butler in the Hobie 14s and Gerda Lambeck in the Hansa 303s prevailed over the course of the weekend.

A special thanks must go to race officers Phil Yeomans and Hamish Balfour, clubhouse manager Terry Paton and all the safety and race management boat crews. Full results are up on the Batemans Bay Sailing Club website www.bbsc.org.au and there are many photos taken by Simon Dunlop posted on the BBSC facebook page.

Next year’s regatta will be on April 22nd and 23rd.