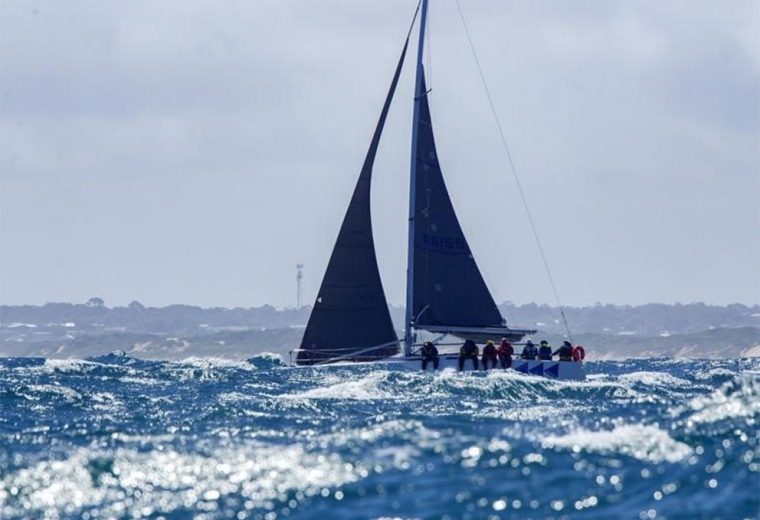 One of the smallest yachts in the fleet, a Sydney 38, has won the Ocean Racing Club of Victoria Melbourne to Hobart ‘West Coaster’ Race on handicap.

Matt Fahey and his crew of six sailed Faster Forward across the Derwent River finish line in Hobart at two minutes past three this morning, after more than three days at sea. For a race traditionally won by bigger boats, Faster Forward’s victory is a dream come true for Fahey and proof that experienced crew, very good light wind sailing and making the right course decisions, pay off.

“The race was dominated by light winds and our smaller boat responds well in these conditions. The crew understands how to keep the boat moving in light winds. To our surprise we were surrounded by much bigger boats for much of the race. I love this boat, it challenges us, and we learn so much every mile we sail,” said Fahey.

Leroux Guillaume from line honours and performance handicap winner, Lord Jiminy said “I’d planned the race to keep it simple, since we were shorthanded with only four crew onboard. Sailing west of King Island was the right decision. We covered more distance, but it gave us a better angle and kept us out of the light air.  Keeping it simple when sailing short-handed was our success,”

This year’s 485 nautical mile race was one of the slowest in its 49-year history with the race record set by Shortwave of 1d 17h 28m 59s never under threat.

Race Director Jeremy Walton commented at today’s trophy presentations, “The best feeling for a race director is to get all your fleet home safely, and that’s what we have done.  These crews will enjoy a fantastic New Year in Hobart and they will be back next year to do it all again for the 50th Anniversary Melbourne to Hobart “