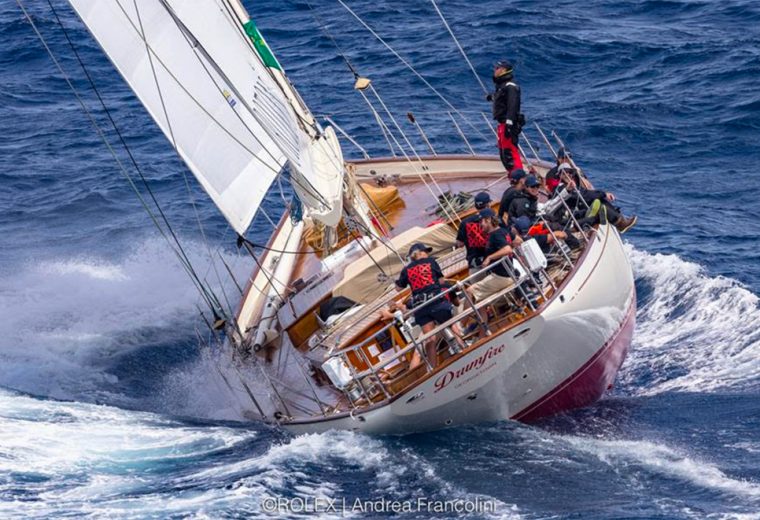 As the 2021 Rolex Sydney Hobart Yacht Race fleet was hit by a southerly on the first night, Adrienne Cahalan, in a crew of 16, spared a thought for those around her and particularly the crews in the Two-Handed Division.

Cahalan, highly respected by the international sailing world, is contesting her 29th Sydney Hobart, the most capped female sailor in Sydney Hobart history. She is navigator on the Hoek TC78, Oroton Drumfire, owned by Will Vicars and skippered by Phillip Neil.

“I just can’t imagine how tough it would have been that first night to have only two people dealing with all the different issues that arise,” Cahalan said this morning.

“So many things happen when you get a big storm like that.

“We’ve got a crew of 16. We can allocate tasks, spread the load across 16 people. But when there’s just the two of you … you’d have to be an octopus to try and do everything that you need to do on racing boats.”

The early conditions played a huge role in the flurry of retirements that occurred in the first two days of the Cruising Yacht Club of Australia’s 628 nautical mile race.

While Oroton Drumfire is a timber luxury yacht, the rough conditions made the first night a challenge for its crew and the rest behind the first third of the fleet.

“The first night was fairly furious,” Cahalan said. “A lot of boats, including ourselves, had to take stock of the situation and protect the equipment and everything on board.

“Fortunately, yesterday, the wind moderated to sort of 20 knots from the south-east; but mostly south to south-east.

“So, there was a lot of tacking down the rhumbline, or whatever part of the course you were on towards Green Cape.”

While the wind eased on Monday night, they still provided a challenge.

“It was a very tricky night,” said the navigator who has taken line honours six times, including two triple wins of line honours, overall and race record.

“As we got towards Green Cape, a lot of yachts that were offshore came inshore.

“There were quite a few tricky transition zones. There was a westerly gradient land breeze and then there was still the ‘sou’ easter’ offshore.

As Cahalan spoke this morning, Oroton Drumfire had just entered Bass Strait and the wind was easing, heralding a new hurdle for her and the crew.

“We have a lot more sailing to do because the wind is starting to fade here now that high pressure ridge is in,” said Cahalan, a qualified lawyer with a master’s degree in Applied Meteorology

“We’ve got to just put another hat on … from having heavy weather and rigorous sailing the last few days, to now getting our light air hats on and having to work out how to navigate across Bass Strait and avoid all those light patches between here at the top of Tasmania.

“It’s going to be a really big achievement to finish this race, because we’ve had such a variety of conditions so far, and that’s only two days in.

“It’s a big test for all the boats. So many skills are required, including being an all-rounder.”

Cahalan winds the clock back to 2015 when 31 boats retired, to find a Sydney Hobart as hard as this year’s 76th edition.

As of 8am this morning, this year’s race has seen 36 retirements from the 88-strong fleet that started. There were still 52 boats racing, including 10 two-handed entries.

“We are only a third into the race from where we stand. There is so much more sailing to do. Anyone can win. That makes it much more interesting,” she ended.