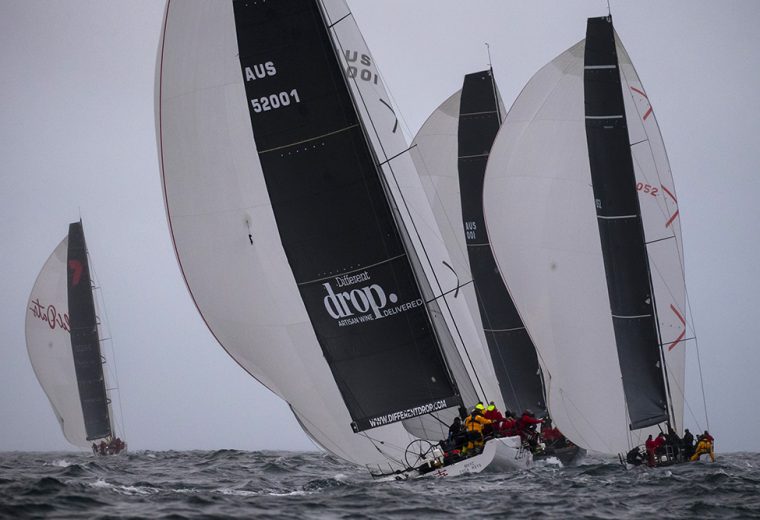 “To take out the final race before the Rolex Sydney Hobart is very special for us,” said Zen’s Sailing Master Shane Guanaria.

“For everyone, it’s a massive confidence boost. We had some trials and tribulations with the boat in terms of breakages over the last few years, so to get this result is a reward for the effort the crew puts in on and off the water.

“We think this is one of the most competitive IRC fleets in the world. There are some very talented and amazing sailors out there, and great teams.”

Zen got off to a strong start on Friday evening, chasing the mini maxis out of the Heads alongside Ichi Ban and Gweilo.

The three TP52s engaged in a tense battle on the way up to Cabbage Tree Island, riding the 25-26kt southerly until conditions got lighter towards Port Stephens.

Zen was within touching distance of Ichi Ban rounding the island, but lost ground on her two closest competitors around 40 nautical miles from the finish after getting stuck in a hole.

“Ichi Ban and Gweilo sailed out to a five-mile lead on us; we thought the race was done there,” Guanaria reflected.

“Then the southerly kicked in and quickly built to 18 knots. We know we have a very strong boat upwind, so we toughed it out, chipped away and got within two miles of Ichi Ban at the finish, which was close enough to get the win on handicap.

“Mentality played a huge role. The crew put in a massive effort; they were all power hiking for the last 45-50 minutes of the race, trying to get every second we could out of the boat.

“That was a big effort, having raced for over 16 hours in the conditions we had.”

What Guanaria describes as “the best Corinthian crew in the country” on Zen included three female sailors under the age of 25 –Clare Costanzo, Rebecca Gmuer-Hornell and Ruby Scholten.

Costanzo and Gmuer-Hornell will be an important part of the Zen crew for the Rolex Sydney Hobart.

“They all took on lead roles and did exceptional jobs,” Guanaria said. “Gordon has put an emphasis on bringing young sailors through and giving female sailors opportunities they probably wouldn’t get elsewhere.

“The crew is thankful to Gordon. We know we’re fortunate to have a boat like we do.”

Shane Kearns’ White Bay 6 Azzurro was one of the smallest boats in the fleet, but she made a mighty impression.

The S&S 34 crossed the line at 0227hrs on Sunday after 1 day, 7 hours, 27 minutes and 53 seconds of racing, securing impressive results across all three handicaps.

White Bay 6 Azzurro will once again look to challenge for a maiden Tattersall Cup in the Rolex Sydney Hobart if conditions suit the smaller boats, and is a favourite for divisional honours.

Eve has enjoyed a good run-in to the Rolex Sydney Hobart, adding the Fully-Crewed Overall PHS to her trio of divisional handicap wins in the Bird Island Race.

The final race of the Pointscore is the Rolex Sydney Hobart.