The Tradition Lives On – A Register of the Historic Couta Boats 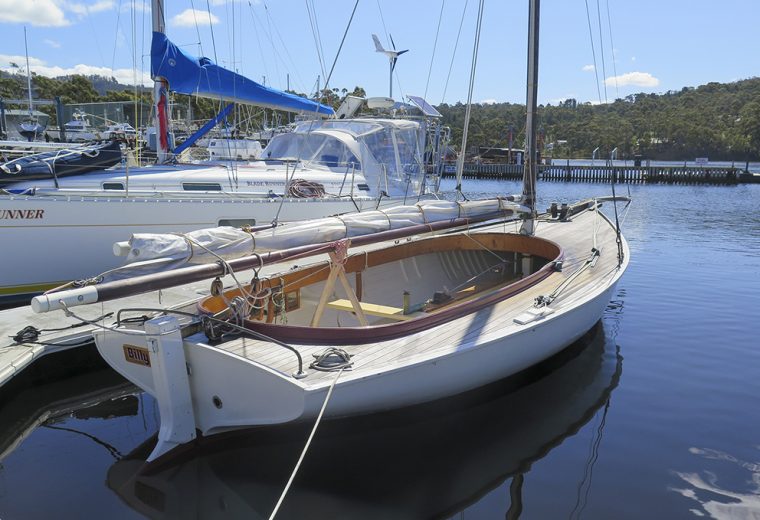 In a letter written to Liz Gibson, the current custodian of the Lacco built, 19 foot Couta Boat Mercury C22 that is moored at Sorrento on Port Phillip Victoria, the boat’s earlier custodian Roy Hoffert recorded the moment he first sighted her in the early 1980s.

“Walking along the pens at Sandringham one day, I saw this battered little fishing boat almost flooded … with a split Jubilee mast, huge forest of weed and blistered paintwork Jackson Pollocked by seagulls – I thought the old hull had class.”

Roy’s letter to Liz is evocative in his telling of the trials and triumphs in restoring, rigging and sailing Mercury. What resonates in the prose is his inexplicable deep attachment for the boat even some 10 years after he sold her.

Mercury is one of almost 200 Couta Boats whose stories are featured in prose and stunning photos, in a Coffee Table Book: “The Tradition lives on…A Register of the Historic Couta Boats” that has been published recently by the Couta Boat Association.

The Tradition lives on…

Much has been written in sailing magazines and journals about Couta Boats over the years, so readers of this magazine are most likely aware that these boats are unique to Australia, with a history that is distinctively related to southern Australian waters. They once dominated southern coastal waters as fishing craft, unique with an open cockpit and a shallow draft, evolving from around the mid 1800s at Queenscliff in Victoria to suit the various methods of hauling fish, namely, barracouta, after which the craft is named. The evolution of the Couta Boat is well documented in the book and traces the development of the design and function of the craft over one hundred years, from the mid 1800s through to the revival period of the 1980s when the craft was transformed into a recreational craft.

When talking about the gaff-rigged Couta Boat today, tradition is at the heart of the matter and is deeply embedded in the Couta Boats that dot these same coastal waterways. Many of the boats are the early fishing boats that were built by the doyens of the Queenscliff boatbuilding industry in the first three decades of the 1900s, namely Mitch Lacco, his sons Ken and Alec, and Peter Locke amongst others. These boats were then restored by wooden boat enthusiasts during a revival period in the late 1970s and 1980s. They became known as heritage boats and today, collectively contain a rich history from their early years as a working fishing vessel.

From the mid 1980s and onwards, the enthusiasts took a step beyond the restoration of the early fishing vessels and began to take a keen interest in building Couta Boats based on the traditional design of the Queenscliff type Couta Boat, and using traditional methods. In the case of Tim Phillips from the Wooden Boat Shop in Sorrento, his interest in the restoration of the Queenscliff fishing vessel led to a thriving boatbuilding industry which over four decades has produced Couta Boats built for both recreational purposes and for competitive racing. In addition, many amateur wooden boat devotees have undertaken a one-off project and applied their skills to building a Couta Boat in accordance with design regulations.

A Register of the Historic Couta Boats

The Register contains so many wonderful stories, documenting both factual and anecdotal material collected from a primary source of current and former custodians. In capturing the history of the heritage boats, there was a greater reliance on the secondary source of stories that over the years has become embedded in folklore. Nevertheless, a folklore that is authentic in preserving the tales and truths of the boat’s past history. Accompanying photos are visually stunning and help to convey the particular features of each boat in a particular locale.

When he wrote his letter to Liz, Roy Hoffert could not have envisaged that Liz would still be the custodian of Mercury some 30 years later. Liz declared that from the moment she purchased Mercury in 1987, she loved her history, her lines, her manageable size and the half cabin which offered protection from the sea. Further,

“Mercury has taught me a lot about the weather, tides, sailing, seamanship and about myself…”

Today, Liz continues to use Mercury for both recreational and competitive sailing in the Division 2 Couta Boat fleet at Sorrento Sailing Couta Boat Club.

Some 10 years earlier to Mercury’s build by Ken Lacco in Rosebud in 1938, Ken’s father, Queenscliff master boatbuilder Mitch Lacco built the 26 foot Wattle for Queenscliff fisherman Walter ‘Cack’ Todd. And over the years, much has been documented about the historic Wattle. Long-time Queenscliff identity Jack Beazley who is the grandson of Walter Todd recalls some amusing tales about Walter and his fishing boat which became part of a larger fleet of up to 50 Couta Boats that sought fishing grounds beyond Port Phillip Heads and sailed around to San Remo in Western Port each spring to fish for barracouta.

As the Queenscliff  fishing fleet grew in numbers, so did the competition among the Couta fishermen, not only for the catch, but they pitted against each other in the regular sailing regattas held out of the various ports including on Phillip Island, Western Port. Wattle duly competed in these regattas, with Walter at the helm often competing against the other Todd family boat, Dawn, which was owned and sailed by his son Jocka. Folklore has it that on more than one occasion Dawn out-maneuvered Wattle, causing friction between father and son.

In 1939, Walter Todd sold Wattle to a young fisherman Len Bagley from San Remo. Len’s daughter Gail Cleeland has in her possession a voice recording of her father who recounts his days fishing out of Wattle.

“…Every day we used the sails. When we were crayin’ down at Coal Point, about 17 mile down the coast, with north-easter blowin’ every morning, you’d have everything on her going down there … By the time you had pulled your pots you’d have a summer south-easter and you would have a nice breeze home. Yeah, and she’d sail like blazes.”

Today, Wattle’s years as a dogged fishing vessel are in the past, but her early history intricately connects her to the present day. The Wattle Cup, instigated by her current custodian Russell Barrett and Magnus Mansie in 2013, is an annual regatta that promotes competition and camaraderie among the Couta Boat fraternity on Pittwater, NSW. The cup itself was the San Remo Victoria Regatta cup dated 1946 and won by W. Croft; having previously been won by the original custodian Walter Todd.

Wattle and Mercury have earned the status as a heritage boat. In contrast, the sail number of Jocelyn C2014 also featured in the book, indicates she is a recently built boat and is a prime example of a modern day Couta Boat built not for fishing but for serious racing. Built with a shallow forefoot, the longest centre-board possible and the longest waterline length to produce straight waterline planes, her design complied with the Couta Boat Association class rules.

Couta Boats built during the past 40 years contribute a more recent narration to the maritime history of southern Australia waters. They continue to be built not just by commercial boatbuilders but also amateur builders such as Tasmanian skilled craftsman Rod Stirling who built Billy in his backyard over a period of nine years and admitted that,

“Every little task presented a challenge.”

Billy, later, cast her allure over her new custodians Anouk and Neil Harding who moved to Hobart from Western Australia because of their desire to purchase a Couta Boat. They purchased Billy in 2018.

“We love the simplicity of the Couta Boat, its history and tradition…”

All of the Couta Boats profiled in the book create their own living history and tradition through the power of the many and varied stories and images that collectively create a rich maritime anthology.

“The Tradition Lives On – a Register of the Historic Couta Boats” is available for pre-order here: www.coutaboat.com.au