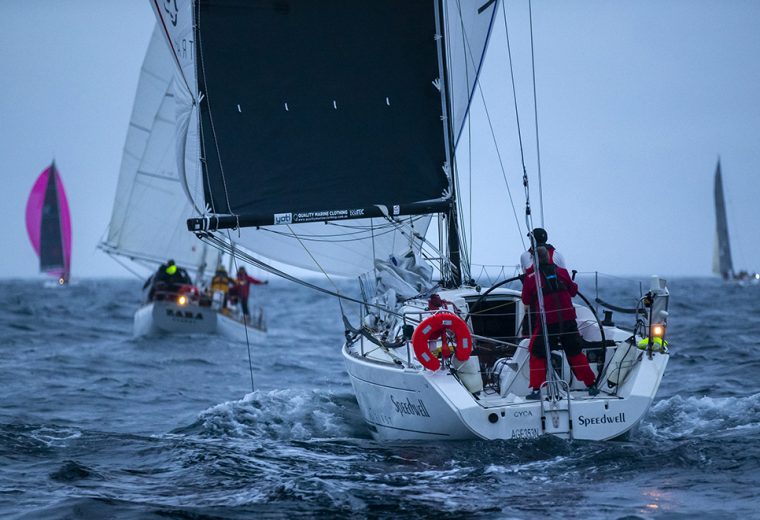 Speedwell completed the 172 nautical mile race in 30 hours, 46 minutes and 22 seconds, crossing the line at 0146hrs on Sunday, just under half an hour ahead of Jules Hall’s J/99 Disko Trooper_Contender Sailcloth (co-skippered by Jan Scholten).

After finishing fifth and fourth respectively in the previous two races of the 2021/22 Audi Centre Sydney Blue Water Pointscore, the pair continued to gather momentum as they build towards the Rolex Sydney Hobart Yacht Race’s two-handed debut.

“It was probably as hard as any offshore race I’ve done,” said Geeves of his maiden blue water win.

“We had a lot go wrong; we had a terrible first night when we broke the retracting mechanism on our bowsprit, so we couldn’t fly spinnakers properly!”

That was one of many challenges the pair faced on the Beneteau 34.7 owned by Campbell’s father, Colin.

At one stage, Speedwell was more than 11 nautical miles behind Disko Trooper, forced to watch the rest of the two-handed fleet sail clear after parking up.

Momentum eventually swung their way, though, as much of the fleet compressed around Boat Harbour, just south of Port Stephens.

“That allowed us to catch up with everyone and we got back into it,” said Geeves. “We had a game plan, which we stuck to, and it worked, which is a nice sentence to say.

“We figured we just needed to keep going. It was a long race, so if we could park, so could they.”

One tactical decision in particular seemed to make the difference for Geeves and Tuck.

“We always thought there would be a SE breeze in it and we were surprised most of the fleet headed in, expecting direct southerly,” Geeves reflected.

“We stayed out in the WSW and when the southerly hit, we just flopped over and stayed east of the rhumb line. That paid off and we sailed around the rest of the boats.”

Even after establishing the lead, there was no smooth sailing for Speedwell.

With Tuck steering and Geeves resting below deck, it was half an hour before they realised the forward hatch had broken and they’d shipped plenty of water.

“It wasn’t without its trials, but it went pretty well,” Geeves quipped.

Having watched their 13-year-old mainsail just hold together to get through last month’s Bird Island Race, Geeves and Tuck received a late boost as a new main arrived on the morning of the Cabbage Tree Island Race.

“We got a new sponsor on board, Optix Trading, which helped us get a new mainsail from Hood Sails and we picked that up on Friday,” Geeves said.

“With the new main, we had the confidence to push the boat a bit harder and it went really well.

“Racing against some new boats in the J/99s – Rum Rebellion and Disko Trooper – we could suddenly keep up with them.

“We have a huge amount of confidence now that we can keep up with, and beat, the newer boats if we just keep going,” Geeves added.

“In terms of the Rolex Sydney Hobart, our physical fitness is going to come into play a lot.

“We were still able to keep making good decisions, putting reefs in, pulling reefs out, and doing various bits at the end of a very long race, which was encouraging.

“My Dad has given us a huge amount of time and effort to get the boat ready. He was up at 4am waiting for Crux to finish and I don’t think he’s been up at 4am for 20 years!

“He’s been amazing, so a big thanks to him for lending us the boat, and all the help and support he’s given us.”

Crux was the final two-handed boat over the line at 0411hrs on Sunday, delivering some impressive handicap results for Carlos Aydos and Peter Grayson.

The S&S 34 was just 11 minutes behind Speedwell on IRC corrected time to finish second and claimed Two-Handed Division wins on ORCi and PHS.

Crux also won PHS honours in the Flinders Islet Race and will be a contender for a handicap win in the Rolex Sydney Hobart.