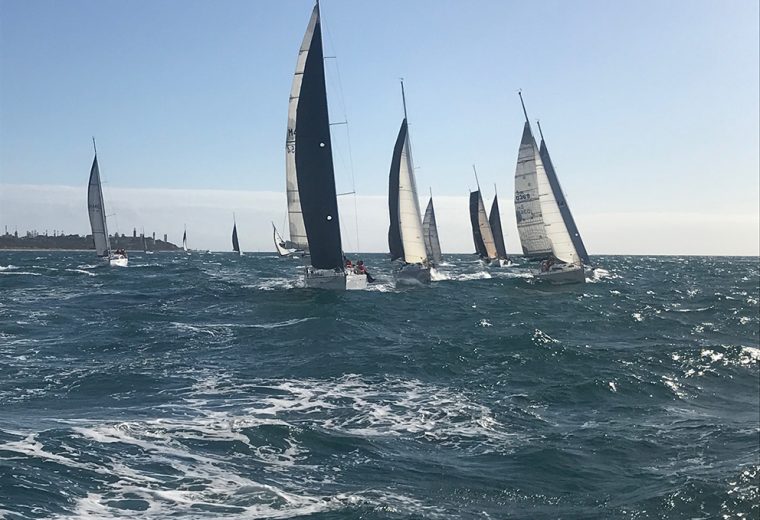 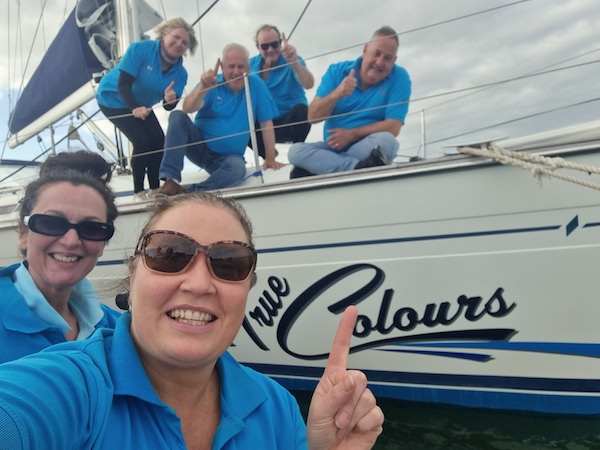 John Strahan and his True Colours crew are celebrating after winning both AMS and ORCc divisions in the season opening Ocean Racing Club of Victoria offshore race.

The 55 nautical mile Bass Strait race starting off Queenscliff was a real test for crew an equipment in windy and choppy conditions.

Sailing an easterly course to Cape Schanck with a 25 knot south easterly the fleet set sail with reefed mainsails. It was a quick refresher course of sailing into the wind in Bass Strait.  “The conditions were challenging, with a swell in one direction and chop in the other, with gust of up to 30 knots,” said Strahan.  “The first leg took four hours of sailing close to the wind to the virtual mark off Cape Shank, but once we turned, it was a reach most of the way to the finish, which our Bavaria 44 performs well. In” said a very happy Strahan.

Winning PHS division double handed sailing duo Rod Smallman and Leeton Hulley on Maverick, a Sunfast 3600. “We were slower getting out through the heads and had always planned to stay left on the upwind leg. Our research indicated that with our course we would get more wind and it offered the best angles and would also take advantages of onshore breeze.  It was a gamble which paid off with Maverick making ground and leading the fleet at the first mark”.

“It was a challenging race having not sailed a lot in the past year, with extra care taken with each manoeuvre, sail changes and tacks, reminding ourselves of the things you need to do to go ocean sailing” said Hulley.

Having owned for close on two years the Beneteau First 45 Audere, skipper Joshua Thring finished third on ORCc and explained “It was a good run for the crew to control the boat and not allow it to get overpowered with the sea state and a great chance for the three helms to practice in preparation for the upcoming ‘Westcoaster’ (Melbourne to Hobart) race.  Thring went on to explain “We started out with one reef and number three headsail and were still a little overpowered.  We talked about changing to the number 4 jib but concentrated on flattening the boat. We had been with Ruyjin in the early part of the day and on the reaching leg, Ruyjin took off.  It took us a few nautical miles to get the courage to pop the kite which gave us a quick run home with 17knots seen at times.”

Thoroughly excited with their win, Strahan summed up the race “Whilst the race had its moments, we like the sprint series, it’s format and daylight starts allows to make a weekend of it with a pub meal on Friday, good breakfast before we start and a celebration at the Queenscliff pub again after the race on Saturday.”

Crowned Club of the Year by Australian Sailing last week, the ORCV looks to continue its celebrations with entries to the milestone races, 50th Melbourne to King Island and 50th Melbourne to Hobart (Westcoaster) due to open in the next week.