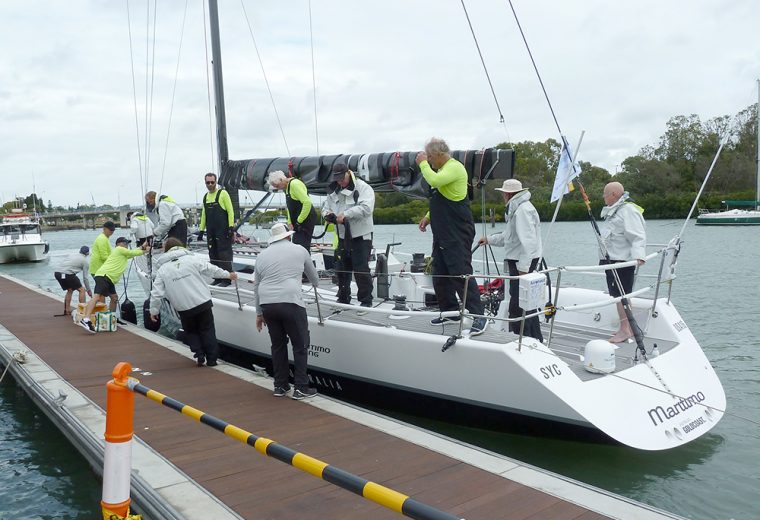 The Notice of Race is out, and the first entries are rolling in for the Gladstone Ports Corporation’s iconic 74th annual Brisbane to Gladstone Yacht Race set to sail on Good Friday, 15th April 2022 from Moreton Bay to Gladstone over 308 nautical miles.

Last year’s race winner and five-time winner of The Courier-Mail Cup, Wistari has been the first entry received.  2022 will mark the 52nd time Wistari will sail in Queensland’s flagship race making it the most entered yacht in the race’s history.

The 2021 race overcame near Covid-cancellation with an initial fleet of 48 entrants.   The starting fleet, although depleted, battled a barrage of winds and rough seas to complete the 73rd Brisbane to Gladstone Yacht Race.

Last year’s line honours was taken out by the 54 foot Maritimo 11 under the captaincy of legendary Australian yachtsman, Michael Spies in a time of a little over 25 hours in 1:01:07:54.

QCYC Commodore, Ian Gidlow is expecting a strong and competitive race fleet for 2022, large spectator crowds and lots following the race online via the Race Tracker.

“We’ve already had word of some very exciting pending entries so expecting our 74th annual Brisbane to Gladstone Yacht Race to be bigger than ever and celebrated not just with Australia’s sailing fraternity but all our spectators in Moreton Bay, Gladstone and online around the globe,” Mr Gidlow said.

“Next year will be my ninth Brisbane to Gladstone Yacht Race as Commodore of QCYC and each and every year I am in awe of the seamanship and efforts our crews go to make this race the mighty event it is,” he said.

The race start will once again be live-streamed including pre-race commentary which is proudly supported by Gladstone Regional Council’s Easter in Gladstone. There will also be an interactive Race Tracker which is keenly followed around the globe.

The Brisbane to Gladstone Yacht Race is steeped in history and was first ever sailed in Easter 1949 where seven vessels took the start line, two of which carried radios while Brisbane’s Homing Pigeon Club supplied pigeons for the other competing vessels.