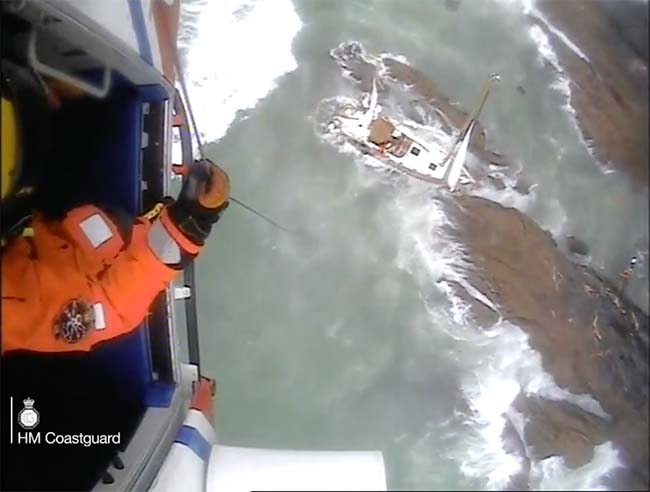 Gasping for air. Desperately clinging on. The terrifying scrapes and groans of the ship being torn apart by the destructive force of the sea as wave upon wave crashed over their heads and drove the sailing vessel into the teeth of Salcombe cliffs. It slowly dawned, as their strength dwindled, that this is where it was going to end.

And then the distant whirr of a helicopter, a flash of red and white, and hope. Her Majesty’s Coastguard, their salvation, had arrived.

“Sheer relief, it was the most incredible feeling to see the helicopter arriving, I thought we were goners,” owner Mark said.

“If the coastguard paramedic hadn’t been willing to risk her own life to rescue us that day, we would have been goners.” 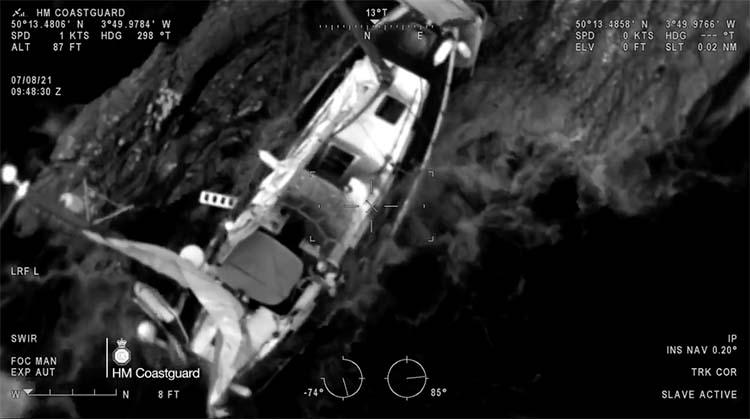 Mark and Deborah were sailing to Gibraltar for the trip of a lifetime and were planning to tie the knot in the Mediterranean. But their trip went ‘wrong, very wrong’ and, instead, left them forever indebted to the helicopter paramedic who pulled them off their disintegrating sailing vessel as it broke up on the rocks around them.

She rescued them just moments before the boat – and they – plunged into a stormy and unforgiving sea.

Abi Wild, winch paramedic for the Newquay helicopter crew, said: “We took one look at the situation and knew we needed to get everyone off that yacht, and quickly. It was obvious the yacht wasn’t going to be in one piece for much longer.

“They were the worst conditions I’ve ever faced, and probably the most dangerous rescue I’ve been involved in.”

The couple from Hullbridge, Essex had made the brave decision to pack up their rented home and move to the Lady Rosemary just six months before. Mark had spent seven years lovingly restoring the 17-ton vessel before deciding to embark on their romantic ‘adventure’.

They decided to first travel along the south coast of England, visiting family and friends and enjoying the beautiful British coastline. But they struggled with increasing inclement weather, even getting waylaid in Cowes Harbour for nearly five days.

“We tried to keep moving but we seemed to keep getting caught up and we were moving from one storm to another,” Mark said.

“We decided to just do the short hop to Plymouth when it looked calm – all of the equipment and forecasts said the weather wasn’t going to be bad, so we thought we could make it.

“And then it all went wrong, very wrong.”

Mark said the engine on the Transworld 41 vessel was brand new and that the couple sailed along the coast with no expectation of issues, even if conditions worsened. But, as they reached the picturesque and jagged coastline at Salcombe, the engine failed.

“It just stopped,” he said. “I kept trying to get it going but it was dead. So I tried to get the sails up but the wind was blowing us straight at the rocks.

“I realised pretty quickly that we were in trouble and that I was going to struggle to sail out of it.”

Deborah put out a PanPan call for help as Mark dropped the anchor, hoping to keep the vessel in open water and prevent it falling victim to the sharp teeth of Salcombe’s cliffs.

But the sea was too powerful to hold anchor and the sailing vessel drifted on to the rocks, prompting a Mayday from the Lady Rosemary’s last occupants.

“She hit the outer rocks and it was just awful,” Mark said. “It was terrifying to feel the boat scraping and tearing along the rocks, knowing the boat was all that was keeping us out of the water.

“And then the waves lifted us right over those outer rocks and into the middle of it all, it was the scariest moment of my life. I was terrified for my girlfriend, she isn’t an experienced sailor.

“The waves were relentless, they just kept coming. The boat sunk even lower in the water and so those waves were crashing over the top of us, it was so hard to hold on.

“We could see a lifeboat but knew they couldn’t get to us, I thought we were done for. We were lucky to still be on the boat when the helicopter arrived.”

He said neither he nor Deborah were aware the search and rescue helicopter from Newquay had been dispatched, as the radio had quickly flooded and become unusable.

“It was the biggest relief, it’s hard to explain what it meant to see the helicopter coming,” Mark said. “We had nearly been washed off the boat several times and we were at our limit.

“It was so hard to hold on, the power of the water was so strong. We were so exhausted and cold by that time, it’s really scary to think what could have happened if they arrived just five minutes later.”

Abi agrees. She said that the original plan had been to winch the two sailors one by one but, when she finally got a grip on the boat’s decking, it immediately became obvious that would not work.

“They were exhausted, you could see it in their eyes, they were close to giving up,” she said. “The yacht had started breaking up and I knew that we needed to take them both at the same time, there wasn’t time for anything else.

“The conditions looked rough but it wasn’t until I got down there that I realised how bad they were. It took me several attempts to even get to them, with the wind and the waves, I couldn’t grab on.

“It’s incredible that they managed to.”Mark and Deborah are still smiling despite recent events

Abi only joined the team of captain Ivan Hamilton, winch operator Ian Copley and pilot Paul Forbes last July, after graduating as one of the first helicopter winchman cadets, having spent nine years as a paramedic.

Ian had high praise for his colleague, as well as his pilot, who kept the helicopter steady and unmoving despite the conditions.

“Much more experienced guys couldn’t have managed it,” he said. “It was a fantastic bit of work by both Abi and Paul, there was absolutely no room for error, and they didn’t make any.”

“It’s only looking back that I realise how gnarly the situation was,” Abi added. “I think because I’d never done a job like that, I didn’t know the waves were going to be that big.

“I’m just so grateful that it went well, and that everyone is fine.”

Although Mark and Deborah lost their home – and most of their belongings – in the incident, they say their friends and family have been ‘wonderful’ in providing support in getting them back on their feet. They know they are lucky to be alive.

“I’ll get another boat again,” Mark said. “I need a bit of time first though, it’s heartbreaking to think about the time and effort put into that boat, and all of our possessions lost too, but this hasn’t put me off the water or my love of sailing.”

But, after all of that, are the couple still planning on getting hitched?

“Oh yes, definitely,” Mark said. “I convinced my girlfriend to go sailing and she nearly drowned, I definitely owe her at least a wedding if she still wants to.”