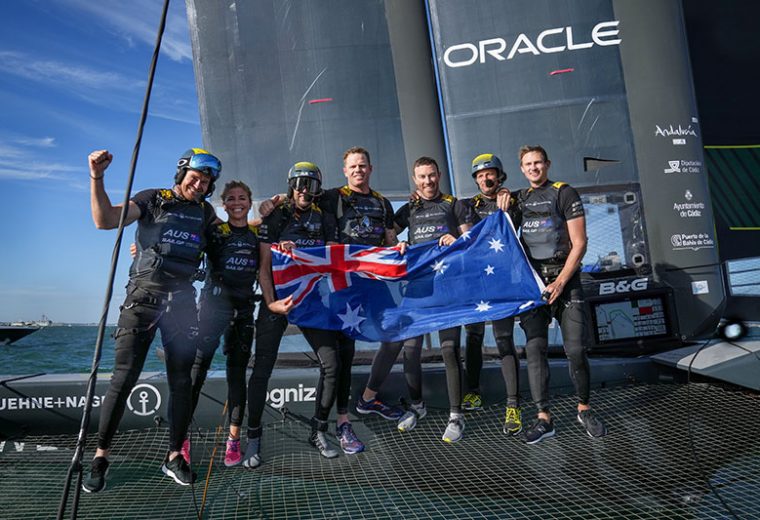 CADIZ- ANDALUSIA, Spain- 11 October, 2021- Tom Slingsby and his Australian Team were crowned Champions of Cadiz Sail Grand Prix, after performing in conditions described as the ‘wild wild west of sailing’.

“I think we had the best seats in the house for Ben’s capsize. They were going so quick and then we saw them go into a huge pitchpole right in front of us. We had to dodge Ben and then we saw Jimmy nosedive trying to avoid the Brits, we had a moment going, is this race still on”, said Slingsby.

But Slingsby was not to be beaten storming home to victory after securing a convincing lead on Spithill’s crew.

“It was a game of survival out there today and I’m really proud of our team. We were able to stay calm and collected during racing, which helped us to know when we needed to push and back off in those tricky conditions”, said Slingsby.

It was only the second day on board racing the flying roo for Nina Curtis, who held her own in some of the most challenging conditions the fleet has ever experienced in racing. She was also on board when the team secured the top event speed of a remarkable 96.3 km/h.

“It was wild out there. Today was undoubtedly the fastest I have ever gone on a boat, I’m still letting it all sink in. It was a real honour to be on board with the team and winning is the cherry on top”, said Curtis.

Tom Slingsby and his crew now have their sights firmly set on returning to home waters for the next event of the season, the Australia Sail Grand Prix I Sydney. The event will take place on the iconic Sydney Harbour on the 17-18 of December. Set to be the event of the summer, tickets for a range of fan experiences are on sale now at SailGP.com/Sydney.

Slingsby said, “The team and I cannot wait to get back to Australia after spending so many months away from home. Seeing eight F50s racing on Sydney Harbour is going to be epic and with the calibre of sailors that we have this year, it’s going to be action fuelled racing.

We lost to Ben Ainslie’s British team last year at the Sydney event, which was a tough pill to swallow for our team. We managed to get our revenge, Beating him at his home event this year in Plymouth and now at this event. I can say that all of our team are very focused on delivering that same result for Australia, in front of a home crowd.”