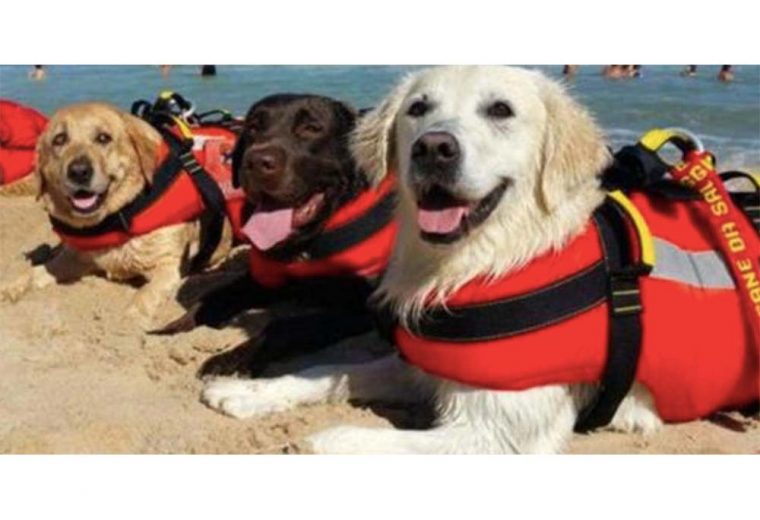 Three water rescue dogs have been hailed as heroes after helping rescue fourteen people, eight of whom children, after a sudden change in weather left them unable to return ashore on their own.

Three families were bathing around 100 meters off a beach in Sperlonga, in central Italy, when the weather changed and waves turned rough, throwing them off their inflatable mattresses and dinghies. Unable to swim back ashore, they began crying out for help, and lifeguards – two- and four-legged alike – were quick to take action.

Labrador Eros, Mya and Mira jumped in the water along with their human colleagues and quickly reached the struggling swimmers, as hundreds of people on the beach observed the action with bated breath.

Michele, one of the lifeguards and owner of Mya, said, “As soon as we got in the water we calmed the people down to keep them from panicking. Then we took ashore the first three, those closest to us.

“Someone cried ‘help me, I can’t hold on’. We helped them with life buoys and took them all ashore. I can still see this little girl, five or six years old, so determined as she held onto the buoy and let Mya take her and the inflatable mattress she was on back to shore.”

He added, “When we finished, there was a wall of people at the beach, thanking us, but at the moment all I could think about was my dog Mya. She was happy, and came over to me wagging her tail. I hugged her and gave her a fuss.”

The dogs’ actions were also commended by the local Mayor, who said, “I am more and more certain that this administration’s decision to improve beachgoers’ safety through the presence of water rescue dogs was the right choice, and this intervention at an especially crowded beach confirms it.”