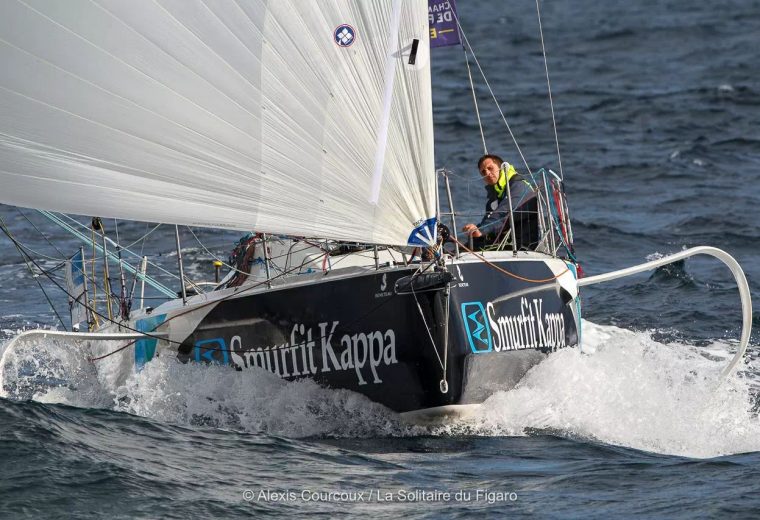 The Irish solo sailor Tom Dolan is leading the 52nd La Solitaire du Figaro fleet towards the Fastnet Rock with high hopes that he will be able to stay in front and lead the 34 boat fleet round the iconic lighthouse around midnight local time tonight.

The skipper of Smurfit Kappa-Kingspan made a key move early this morning when he chose to stay west, close to the Scilly Isles where he found more wind and was able to accelerate ahead of his rivals, most of whom had stuck close to the Cornish coast.

Dolan, 34, from County Meath has had a good record racing to the Fastnet in recent editions of the annual French multi stage solo race. Last year he also led the race and rounded third, en route to finishing fifth overall.

After two disappointing stages to Lorient and Fécamp, Dolan is hoping he has saved his best for the last leg, a marathon 685 miles leg which started from Roscoff Sunday afternoon and should finish into Saint Nazaire on the French Loire-Atlantic coast late on Thursday.

With 70 miles to sail to the Fastnet he was more than five miles clear of the next sailor, France’s Xavier Macaire (Groupe SNEF) who led Dolan round the rock last year. Macaire, who lies second on the overall standings after three of the four stages, has been fast all afternoon and was closing miles on the Irish leader.

I was kinda expecting this ranking following my route to the west of TSS. I knew I was ahead but I didn’t know by how much. It’s great to be in this position, especially when I feel like I’m heading homewards towards Ireland. I come from a small town which is in the north east of Ireland, north of Dublin, almost on the border with Northern Ireland.” He told the race media team on board the guard boat,

Explaining his strategy he said, “I had seen from the files that it was more wind in the west, and that there was something to do. I lost everyone with the fog last night and the AIS not working. I had my doubts, I thought I was the only one going that way. But we have also Philippe (Hartz) and Maël (Garnier) I think it was them as I heard them talking in the radio. The Fastnet, I must have passed it about 50 times because I spent a lot of time in Baltimore, and we often went out there often.”

“Right now the sun is shining, it’s great if a bit rare at this time of year. I’m afraid there won’t be much wind when I get to the lighthouse. This morning, I slept a lot and now I’m steering a lot to get to the Fastnet because I would like to get round before the bad wind arrives. I feel like I’m on the right timing I think, I have my fingers crossed, I might get some good luck from Ireland.”

In English Dolan said, “I am happy with my position at about 80 miles from the Fastnet, I think we will arrive there about midnight Irish time, it will be a bit of a pig because I was looking forwards to seeing Ireland, so I won’t see much of it this time around. I am happy to be going there just the same. The conditions are fairly good at the moment. I have around 20-24kts of wind and am under big spinnaker with a bit of swell over the back of the boat and I am pushing along at 12-13-14kts. I am happy with what happened. On the GRIB files I had seen there was a bit more wind in the west and sailed very low and it seemed to work. I was a bit doubtful heading into the fog but here we are, voila, voila.”