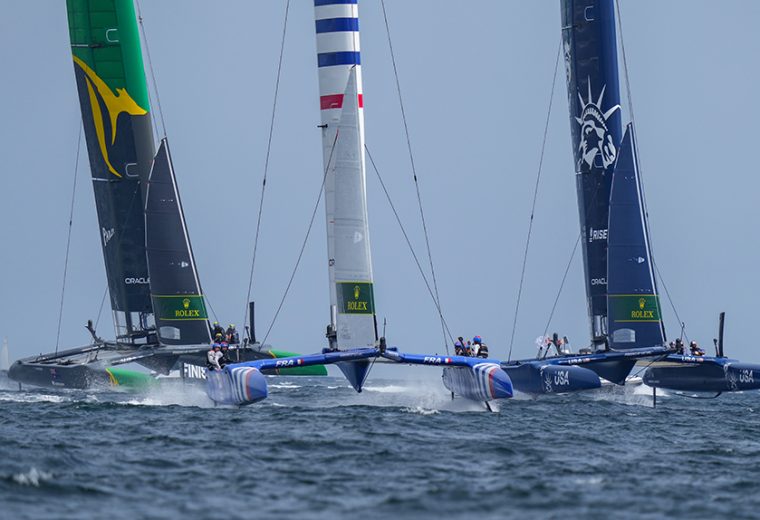 ST TROPEZ, FRANCE – 12 September, 2021 –Tom Slingsby and The Australian SailGP Team could not orchestrate a comeback on the final race day of the France Sail Grand Prix, after a weekend plagued by technical issues.

After finishing the opening two fleet races of the day in fifth and sixth respectively, the Australia team did not qualify for the final ‘winner-takes-all’ race. Ultimately, it was the Japan Team led by fellow Australian Nathan Outteridge who took the final race win, and with it the Grand Prix, in a final podium race against USA and Spain.

Despite the impressive efforts of the SailGP Technical Team to repair the technical issues plaguing the flying roo in time for race day 2, Slingsby’s crew couldn’t claw their way back up the leaderboard.

Slingsby said, “It’s a disaster of an event for us, there is no other way to look at it, we came last. The other boats are going to do what they are going to do. We can only concentrate on ourselves and we didn’t perform today.”

For the first time in the history of the league, all F50’s were kitted out with the revolutionary 29 metre wing for racing. The larger height and surface area of the wing enabled the team’s to foil in the light wind conditions at St Tropez.

Australia Wing Trimmer Kyle Langford commented on the new wing saying, “the big wing was great, I really enjoyed racing with it. It’s different and I’d say anything new on these boats is cool because it means that you need to learn new skills and adapt.”

“The 29 metre wing does produce more power, but at the same time it’s heavier and the boat doesn’t foil and maneuver as easily. So, we will need to look at adjusting our playbook, but I back our team to learn quicker and better than any other team in this fleet. It’s one of the best aspects of SailGP, that they are constantly adding new equipment and tech to these boats”, Langford added.

Slingsby and the crew will now prepare for the next event in Cadiz taking place on October 9-10, before they return to home waters for the highly anticipated Australian Sail Grand Prix I Sydney on December 17-18.

All of this weekend’s racing is available on demand on Kayo Sports. Kayo Sports are offering fans free access to both the live and replay racing, via it’s Kayo Freebies offer.