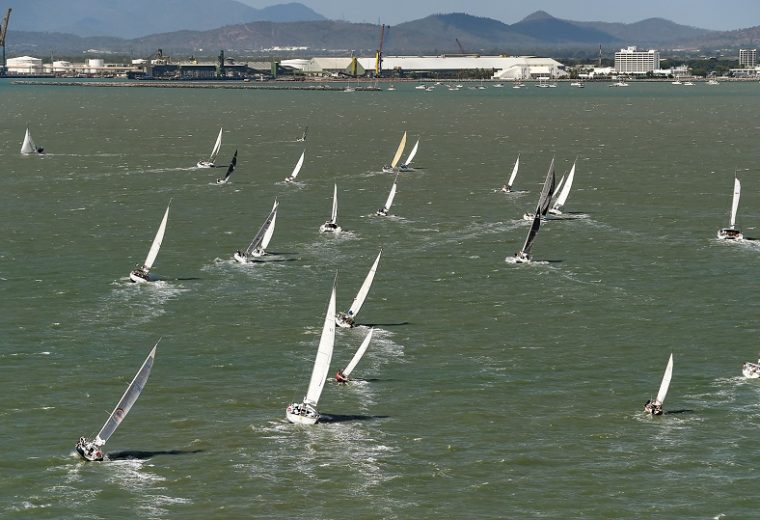 The 14th SeaLink Magnetic Island Race Week (SMIRW) was over too quickly, the week flying by as it does when you are in such a beautiful tropical location at the beginning of spring and the conditions are conducive – but that is how it is, and this afternoon the winners were decided.

Organisers at Townsville Yacht Club (TYC) once again pulled out all stops to make sure competitors, their family and friends had a wonderful week on and off the water at this truly unique event.

“We ran down Middle Reef and saw gusts up to 24 knots, but it mainly stayed around 20 knots after that. It was an exciting spinnaker run to the finish. The wind was on our quarter and we flew home,” Mike Steel, the owner of Division 2 boat, Boadicca said, describing the triangle race.

Not all went well, though. “We were OCS but re-started and ended up second at the Nautilus mark. Then the genoa car broke at the Strand mark. That was the end of our chances,” he said.

SeaLink Spinnaker Division 1 was won by Leon Thomas and his Sayer 8, Guilty Pleasures 8. Thomas, who owns the smallest boat in the division, won the opening and closing races. Ragamuffin III, a Frers 48 (Stuart Tivey/Lisa Sampson) was second and Craig Watson’s Jeanneau 53, Coopers, third.

“After not being able to race yesterday because of  the strong wind warning, it was good to get on the water again,” Thomas said. “It was a relatively short course, not a lot of windward work, lots of downwind and two-sail reaching, which really suited us. But we still had to put one foot in front of the other and sail the boat well.

“For a small boat, we’ve done well. It’s fantastic to win overall. I believe we’ve won once before, but it’s been a while, so we’re all ecstatic.”

Kingsberry was not aboard, leaving his brother Matt in charge: “We took the handbrake off today,“ Matt  said laughing, enjoying the joke on Ben.

“It was a two reef job. We started with one and put a second one in later. The cats (catamarans)  slowed us down a bit. We couldn’t get clear air. We finished fifth, but it was enough to win the series. “The mark roundings were pretty exciting – plenty of traffic – the fleet definitely condensed.

“All week we’ve had no apparent wind or speed instruments, so the team did a great job, considering. It was instrumental having Jim Nixon on board,” he said of the offshore sailor from Sydney, who escaped town before lockdown.

“This is our second Race Week. We retired from the last on the trimaran Outrage. We were so novice we couldn’t outrun a monohull. We had a racehorse, but the jockeys were no good!”

Matt praised the Race Committee: “They did a good job. They picked the right course today – one that wouldn’t break boats. We love it here. We love the casual approach and the challenging sailing conditions. It’s hard to sail here – it’s varied weather and it’s technical.”

Son of a Son, the Farr 1104 owned by Peter Webster, won SeaLink Spinnaker Division 3 by a single point to Rod Finucane’s Fenina, after the pair scored a win and second respectively today. Vicki Hamilton and her all but one female crew placed third overall with her Akarana.

Drew Carruthers won the first two and final races in the Multihull division with his Drew 15, Rushour, to win the series overall. Graeme Etherton’s ‘The Boat’ was second and Ian Johnson’s Salacia placed third overall.

With three wins from four races  and an abandoned race yesterday, it was a big ask to beat Lance Denby’s Ostara in the Non-Spinnaker division. Tasmanian Glenn Myler won the final race with Thylacime One to finish second overall, while Gavin Gourley’s Elektra (Vic) was third.

Myler was chuffed with their day: “We were lucky enough to get the line honours and race win double. The crew are pretty happy. We’re celebrating. People are shouting us drinks to celebrate our double, and we’re drinking them!

“It was good fun out there; 16-18 knots to start , but it got lively at 20-24 knots. We mainly had a Tassie crew on board. I come from there but live on the eastern seaboard these days.”

Myler explained his moving around states: “My Beneteau Oceanis 43 has been my house for the last six years. I come from Tassie, but I live on the eastern seaboard these days.”

In other news, Jimmy Finch’s steel-built Finch 40, Warrigal, was holed near the starboard bow before the race even began. “A big Lagoon (multihull) was driven backwards by a wave and sailed straight back into us. We tried to avoid it, but couldn’t do anything. Lucky nobody was hurt. Otherwise, we’ve had a really good week here,” the local sailor recounted.

A few boats broke the start and were recalled, and Brava (Tony Muller) and Vanilla 2 (David Perkins) had a little kiss at the Strand mark. “There are no bad feelings attached, David was very good and we are sorting it out between us,” Muller commented.

A crew was medevaced from Vanilla 2. Her skipper, David Perkins,  explained it was pre-existing condition that was exacerbated by today’s conditions, but the crew is home and well.

Winners will be awarded their trophies at this evening’s Presentation Night at Peppers Blue on Blue resort, from where all the daily action emanates and where the bulk of competitors are accommodated.

Lyndy Sawbrdige, owner/skipper of Helena May, was  awarded the Sarah Goddard-Jones trophy. Nominations come from competing boats, and the Trophy is awarded to the team best characterising the spirit of the regatta and who most embodies Sarah’s ethos for seamanship and sportsmanship above all else. Sarah was a regular at Maggie Island with her partner Peter Lowndes on Wine Dark Sea. She passed away following a diving accident in 2019.

A long-time supporter of Race Week, Sawbrdige is willing to teach others sailing, and encourages people to learn and think ahead. This year, she loved having two keen kids aboard – seven and 12 year old’s – along with two SMIRW sponsors.

A special mention goes to Gary Donnellan and the crew from Anastacia, for their efforts to get here from Melbourne and further efforts to put a crew together, when all of Donnellan’s usuals could not be here.

In his role as TYC Vice Commodore and Event Chairman, Steel said, “We want thank all competitors for taking the time to attend SeaLink Magnetic Island Race Week. We hope everyone enjoyed the racing, our social activities and the activities available to all on this island.

“We’d like to thank our many sponsors, in particular our naming rights sponsor, SeaLink. Without them, our event would not be possible.

“We also thank our volunteers and race management team, some are here on the Island, while others, such as our Principal Race Officer, Denis Thompson, worked remotely from Sydney. Despite the difficulties, the team pulled together and made it all happen.

“Lockdown has changed a lot of lives. We hope all those competitors who could not be here are able to join us next year,” Steel ended.

SeaLink Magnetic Island Race Week 2022 will be held from 1 to 7 September. Registration will open on 1 March, so please sign on early, as this is a regatta that does book out quickly.

For full results and all information, please visit: www.magneticislandraceweek.com.au/