Ciao to Day 1 of the Etchells Australian Nationals 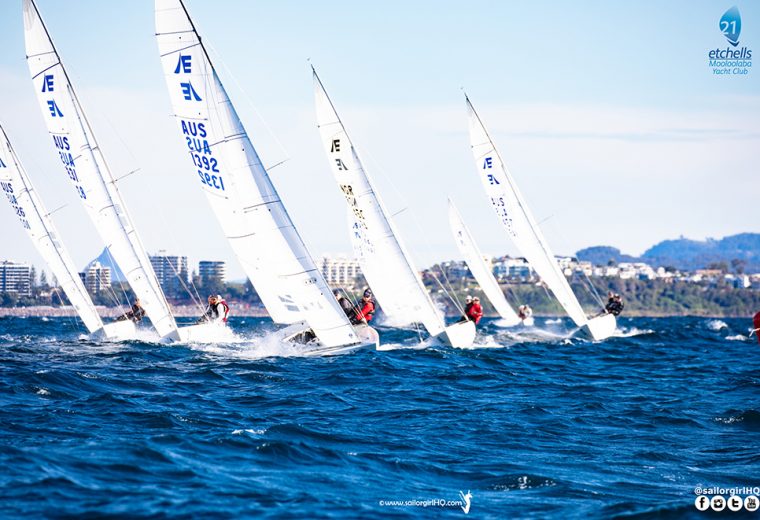 Day one of the Etchells Australian National Championship kicked off on Thursday 10 June and it is tight at the top following some high scoring results, across the board.

Not unbefitting to a National Championship, the conditions were testing for competitors and the race committee. The breeze was shifting right through the north-north westerly quadrant, with 300 to 010 seen on the compass over the period of racing, gradually building from 8 to 18 knots of breeze over the three races.

Race 1 got away after a short postponement when the breeze swung from 300 to 315 just before the starting sequence got underway. The fleet started just after scheduled time, on Course 2 (two laps of the top mark, downwind finish) an 8 to 10 knots of breeze with a 0.8 nautical mile beat.

Steve Billingham on Thelastone AUS1392 was quickest off the mark and took best advantage of the light and shifty first beat to lead around the top mark over Chris Anderson and his youth team on Standin Line AUS1021, and Ciao AUS1244.

By the first gate, Anderson and the next five boats that had rounded the top mark had moved ahead of Billingham as the breeze shifted left.

Anderson and the Standin Line AUS1021 team held the lead through to the finish, Jason Ward from the Cruising Yacht Club of South Australia on Whisper AUS1457 with Darren “Twirler” Jones and Silas Nolan finished second, with Shoulda Gone Left AUS1395 in third.

By the start of Race 2 the breeze had swung to 325 and increased to 10 to 12 knots of pressure. The fleet got away cleanly.

With a left-hand shift on the first beat, first to round the top was Mat Whitnall on Dawn Raid AUS1361 followed by Trevor Martin AUS1144 Just 2 Funny and JC Strong’s Flying High AUS1435.

By the bottom mark the breeze had tended to keep moving left. There was a change of course for the second top mark to 340 and the length was also extended as the pressure continued to increase.

Around the top mark, Merrington and Martin were neck and neck, with Martin just getting inside of Merrington, and Whitnall hot on their heels.

The first attempt of Race 3 resulted in the event’s first general recall, unusual for the Etchells fleet. The course was set at 010, and it moved even further right to 020 during the sequence.

The race eventually got away after a short postponement when the breeze swung back to the left, with the course set at 350 degrees and a windward leg of 1.1 nautical miles with the increase in pressure, 15-18 knots.

Todd Anderson and his team on Tag AUS1330 were able to make the most of the pivoting course and lead around the top mark, followed by Steve Billingham on Thelastone AUS1392 and Douglas McGain and his team on Ciao AUS1244.

The breeze continued to go left, as far as 330 at times, and it was Douglas McGain who took the win, and the overall lead in the final race of the day. Peter Gardner on Vincero AUS1343 slipped through to second from sixth around the first top mark, and Todd Anderson and the Tag AUS1330 team fell back to third.

Racing will continue today as soon as possible after an onshore, and now on water postponement.

Watch the live feeds on Adventures of a Sailor Girl.

Story and photos by Nic Douglass